Indonesia’s presidential election, which has turned into a hotly contested two-horse race, has invited comparisons to famous epic battles, both fictional and historical. Netizens liken it to Bharatayudha — as the final, all-out war in the Hindu epic Mahabharata is known in the country. One political analyst called it “Indonesian Star Wars.” Amien Rais, former chairman of the 30 million-strong Islamic organization Muhammadiyah, brought up the analogy of the Prophet Muhammad’s Battle of Badr.

Hyperbolic they may be, but these comparisons nonetheless reflect how polarizing the July 9 poll has become. It has divided political parties, pitted friends against friends, parents against children, husbands against wives. “I’ve always considered marriage to be the primary cause of why most friendships end,” said one Twitter user. “And then along came the 2014 presidential election.”

The two men vying to lead the country stand in stark contrast to each other, and make this a showdown between political outsider and political patrician. The outsider is Joko Widodo, 53, a onetime furniture entrepreneur who has charmed the public with his down-to-earth demeanor. Joko, popularly known as Jokowi, grew up poor, living in a riverside slum in Solo, Central Java. He cut his teeth in politics as mayor of Solo, where his blusukan (impromptu visits to constituents) and his push for clean governance set him apart from aloof officials in a country plagued with graft scandals. He even won recognition as one of the world’s best mayors. Riding on his immense popularity, Jokowi teamed up with a maverick Chinese-Christian politician to run in the Jakarta gubernatorial election in 2012 and won.

The patrician is Prabowo Subianto, 62, a former military general dogged by allegations of past human-rights abuses. Prabowo comes from a privileged background: his father, the late economist Sumitro Djojohadikusumo, was a minister under Indonesia’s first two Presidents, Sukarno and Suharto. His brother-in-law is a former central banker, while his brother, Hashim Djojohadikusumo, who bankrolls his presidential campaign, is a billionaire with a global business reach. Prabowo himself pursued a military career, and after marrying Suharto’s daughter (the two are now divorced), he quickly climbed up the ranks and took part in military operations battling rebels in East Timor and Irian Jaya. He went on to lead elite army units: the Special Forces and later the Army Strategic Reserve Command. His career ended abruptly after he was discharged from the military in 1998, months after Suharto’s fall, over his role in the abduction of pro-democracy activists.

Sixteen years after the fall of authoritarian strongman Suharto, the country with the world’s largest Muslim population (and Southeast Asia’s biggest economy) is a rare example of democratic reform. The election on Wednesday will usher in a new leader to replace the outgoing incumbent, and the country’s first directly elected leader, President Susilo Bambang Yudhoyono (who cannot run again because he has served two terms). But more than that, the poll has become a vote for Indonesia’s future political direction.

On Saturday, speaking to tens of thousands of supporters at a free concert and rally organized by dozens of popular musicians, Jokowi said, “We gather here as part of a democracy that ensures participation of all people in determining the nation’s future, to respect human rights, fight for justice and maintain plurality and peace.” He talks the talk. His deputy mayor in Solo was a Catholic, and in Jakarta, he refused to give in to those protesting against the appointment of a Christian subdistrict head. He also champions pro-poor, populist economic policies.

In contrast, Prabowo, who portrays the image of a firm leader with his fiery speeches and antiforeign rhetoric, repeatedly speaks against Indonesia’s democratic process. In two separate events in late June, the former general said he would like to get rid of direct elections because they were the product of Western values and were breeding corruption. “Our version of democracy is very expensive,” he said. And while Prabowo says he is committed to freedom of religion, his party’s manifesto says that “the state is required to guarantee the purity of teachings of the religions acknowledged by the state,” and his campaign is backed by Islamic hard-liners. Though he often speaks out against corruption, his coalition includes figures tainted by graft allegations.

“This is no longer about a contest between two candidates — it is about the future of Indonesian democracy,” says Marcus Mietzner, an expert of Indonesian politics at the Australian National University, about the election. “A vote for Jokowi preserves the existing system, while a vote for Prabowo would send Indonesia onto a path of political uncertainty, conflict and democratic regression. The stakes have never been higher, and that’s why the polarization is at unprecedented levels as well.”

Also unprecedented are the smear tactics. While these have been used in previous elections, both local and foreign observers agree that the intensity and persistence of attacks on Jokowi are something never seen before. In tabloids like Obor Rakyat, which is widely distributed at mosques and Islamic boarding schools on Java, and in social media, Jokowi, who is Muslim and Javanese, is accused of being Christian, of Chinese descent and a communist. There are signs that these calumnies are hurting him. The front runner, who comfortably led opinion polls by over 20% to nearly 30% months ago, has seen the gap narrow to single digits in different opinion polls. Another factor is the highly efficient and effective party machinery behind Prabowo vs. the motley network of volunteers that Jokowi relies upon.

Nevertheless, “Indonesia’s Obama,” as Jokowi has been dubbed, has been making a last-minute spurt, thanks to a wave of Indonesian celebrities declaring their support for him, and his strong performance in the final presidential debate on July 5. Overseas stars have weighed in too — American singer Jason Mraz and Guns N’ Roses guitarist Ron “Bumblefoot” Thal have tweeted their support for Jokowi. Sting posted on his official Facebook page: “Use your rights — every vote counts #Jokowi9Juli.”

The percentage of undecided voters has shrunk to around 8%, according to one pollster, but they could still decide the outcome of one of the most crucial polls the country has seen — perhaps the most crucial poll. But at least it is a poll and not a Battle of Badr or a Bharatayudha. As the poet and essayist Goenawan Mohamad said: “Elections are the most peaceful way to choose a leader. Not all-out battles, as if there is no tomorrow.” 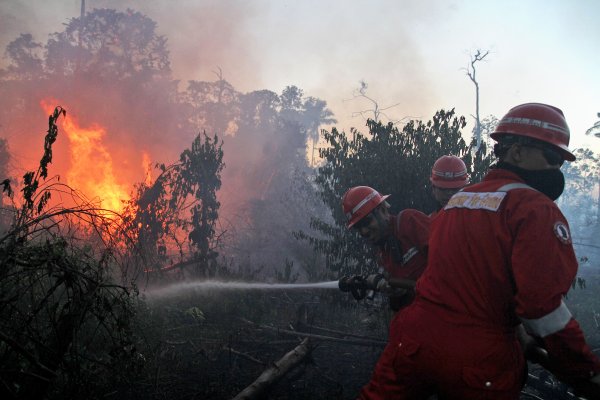 Indonesia Now Has the Highest Rate of Deforestation in the World
Next Up: Editor's Pick