Android Wear Review: The Watch That Wants to Save You From Your Phone

A funny thing has happened to me over the last week and a half, as I’ve been reviewing a couple Android Wear smartwatches from LG and Samsung: Instead of being the guy who takes out his phone at every opportunity, I’ve become the one who stands idly by while other people thumb around on their handsets.

It’s not that I’m always fiddling with the screen on my wrist instead; I’m actually spending less time interacting with screens in general. By having all my phone’s notifications in view, I can ignore the ones that aren’t important and quickly deal with the ones that are. And because the phone stays in my pocket, I’m not tempted to spend the next five minutes looking at Twitter or Facebook. Against all logic, tethering a computer to my wrist has been liberating.

Right now, there are two smartwatches that run on Google’s Android Wear platform. Samsung’s Gear Live costs $199 and is a bit gaudy with its metallic trim and slim snap-on wristband, while the $229 LG G Watch strikes a more utilitarian look with a rubberized band and all-plastic finish. In both cases, the aesthetic leans toward “geek badge of honor,” thanks to clunky rectangular bodies and thick black bezels around the displays. (I’ll compare the two watches more in a future post, as I’ve only spent a day with LG’s model. My quick impressions are that Samsung has the better screen and more appealing design, while LG’s drop-in dock is more convenient for nightly charging.)

Like other smartwatches on the market already, such as the Pebble and Samsung’s Galaxy Gear line, Android Wear puts your phone’s notifications on your wrist. But what stands about Google’s approach is how little effort it takes to view these notifications and take action on them with a swipe or voice command.

With Android Wear, there’s hardly any setup involved. Everything’s tied to the actionable notifications on Android phones, so once you’ve paired the watch over Bluetooth, you can immediately do things like manage e-mails, dismiss text messages, control the phone’s music playback, glance at sports scores and get traffic alerts from Google Now. The screen stays in greyscale mode until you tap it or tilt it toward you, at which point you can view each notification by flicking upward.

This can lead to some delightful moments as you get in the habit of glancing at your wrist for information. Last weekend, for instance, I made a quick trip to the grocery store to grab some breakfast items when I caught a notification from Todo Cloud, a free smartphone app that supports location-based reminders. It was telling me to pick up some pasta–something I’d reminded myself to do earlier–and I would have missed the message if it hadn’t been waiting on my wrist. Without any extra effort on my part, Android Wear saved me a return trip to the store.

It helps that the software is smooth and responsive, and generally runs without any glitches, but I do have a few nitpicks: It takes a little too long for the system to recognize swiping after the screen lights up, and I wish you could un-dismiss a notification if you accidentally swipe it away. It’d also be nice if the main screen had an icon bar, like the one on Android phones, so you could get a high-level view of which notifications are waiting.

Android Wear will also face some natural growing pains, as a lot of third-party apps still haven’t optimized their code for wearables. For example, Secret can notify you when a friend posts, but doesn’t show you the actual post on the watch. You can retweet or “favorite” a Twitter mention, but you can’t reply directly by voice. In WhatsApp, there’s no way to view full messages, reply to them or mark them as read. Because Android Wear is supposed to just work, it’s disappointing when these apps don’t.

That same kind of uncertainty carries over to Android Wear’s voice commands, which you trigger by tapping the main screen or saying “OK Google.” This is useful for quickly dictating a text message, setting a reminder or pulling up turn-by-turn directions, but most third-party apps don’t work with voice — and the handful that do require you to memorize specific syntax. Voice recognition also stumbles in some areas, always recognizing “Android Wear” as “Android Where,” for instance, and failing to interpret punctuation commands like “comma” and “question mark.” I quickly learned to avoid voice unless I knew exactly what I was going to get in response.

Why Not Just Take Out Your Phone?

A lot of the above issues are annoyances rather than dealbreakers. But as Google tries to improve the platform, there’s a more fundamental dilemma that Android Wear needs to figure out: If most people are happy to whip out their phones, why would they care about a device that spares them from doing so?

The answer, I think, will come from functions that are not as practical on a smartphone–things you might not do at all if you have to take the device out of your pocket. Android Wear lays a foundation for these kinds of uses, but doesn’t provide nearly enough of them.

Going back to my grocery store example, while I was shopping I also saw another notification from Google Wallet, letting me know that I was close to the in-store Starbucks. The reminder alone wasn’t useful, but imagine if Wallet had gone a step further and put my Starbucks card’s barcode on my wrist. If every loyalty card, coupon, ticket and boarding pass could pop up in the right location, I wouldn’t even have to think about reaching for my wallet or phone. This is definitely possible with Android Wear–Delta is already doing it for boarding passes–but it’s not a centerpiece of the platform right now.

Likewise, Google has promised the ability to unlock your smartphone or Chromebook with a paired Android Wear device, and it’s easy to imagine this capability expanding to sensitive third-party apps in the future. But even the basic unlocking feature won’t arrive until the next version of Android comes out this fall.

What we have now is a classic Google work-in-progress. The software needs more ways to surpass the abilities of users’ smartphones, and the hardware needs to get thinner, lighter and less clunky. (Motorola’s Moto 360 watch will bring some much-needed style to the lineup later this summer, but it’s not a panacea for bulky tech.) And while I’m not bothered by the one-day battery life of these watches, they need more convenient ways to recharge overnight, such as a wireless charging mat on your nightstand. Until the hardware and software are further along, saving yourself from your phone should probably wait. 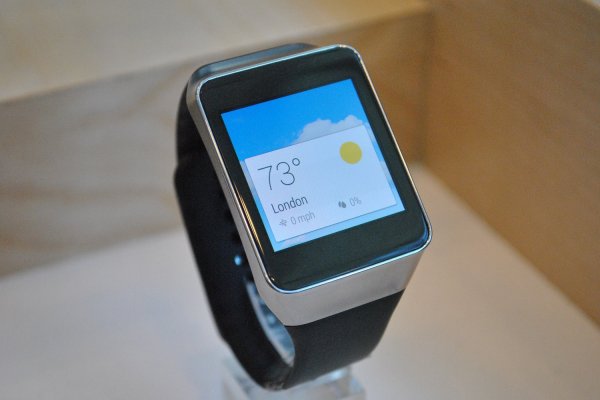 5 Quick Impressions of an Android Wear Smartwatch
Next Up: Editor's Pick