Songs of the Time: Richard Linklater on the Music of Boyhood

A scene from 'Boyhood'
IFC Films
By Lily Rothman

Think back: to your first high-school dance, to the first time a parent spoke to you like an adult, to the summer it seemed like your friendships would last forever, to getting in the car to drive away after your heart had just been broken. Which song was on the radio?

For someone out there, in a situation similar to that last one, it was “Hero” by the band Family of the Year. And, because that person happened to be one of the music “consultants” on the new movie Boyhood (July 11), that song was also playing at a key moment in the movie’s main character’s life.

“Everything in the movie is attached to something real,” filmmaker Richard Linklater tells TIME. “It all kind of happened in some form or fashion. I wanted the same with the music. I wanted to hear, ‘I just broke up with my girlfriend and I was driving in a car and that song came on the radio and it made me feel like everything was O.K.’ That means something to me, that somebody somewhere had an emotional experience with that song. I didn’t want songs that no one had an opinion about.”

That mission — to populate Boyhood with songs that could stir up emotions — was particularly important given the film’s unusual backstory. Linklater (who also spoke to TIME for this week’s issue) spent 12 years filming the story of his protagonist’s youth, which allowed him to catch young star Ellar Coltrane growing up in front of the camera. Linklater describes the movie as different from anything he’d ever done before, and says the music was no exception. Though he tried it with an orchestral score, that felt too authorial, like adding a voiceover. Instead, he decided, every song heard in Boyhood would have to be something that the characters would actually listen to, in that year and that place in their lives.

“It had to be songs of the time,” he explains. “Music is obviously such an evocative nostalgia or memory trigger, for a place and time. You hear a song and pow! You’re back in eighth grade.”

That’s where the consultants came in. Linklater says that he originally intended to ask Coltrane and his young co-star Lorelei Linklater (the director’s daughter, who plays the hero’s sister) what kids their age were listening to, but found that their tastes were too specific to themselves and not the characters. (He liked Rage Against the Machine; she liked harpsichord music.) So he recruited a few young people — interns, friends of kids of other people — to write narratives about songs that were up for inclusion on the soundtrack, as a litmus test.

“It was fun to get educated,” he says, even about types of music that he wouldn’t ordinarily listen to, like the Cobra Starship song that will take many viewers right back to the summer of 2009. “You look at it from a kid’s point of view and go, hey, if I was this age I would totally love this. Ultimately everything in the movie I do like.”

For the songs that weren’t the soundtrack to real-life moments, Linklater used the characters as touchstones for the songs. For example, the musical aspirations of the protagonist’s father, played by Ethan Hawke, shaped the soundtrack. In fact, many of Hawke’s lines directly address the music they’re accompanied by, from a scene in which he deconstructs a Wilco track to one in which he gives his son the gift of a CD of songs from the Beatles’ post-Beatles solo career.

“For a while I was playing with George Harrison’s ‘What is Life’ [for that scene]. It was a bit on-the-nose,” Linklater says. He ended up with Paul McCartney’s “Band on the Run,” which he describes as one of the greatest pop songs ever made. It also captures what he calls “the eternal-ness of all things Beatles” in one of the film’s few moments in which the song playing doesn’t offer a timestamp of sorts, a clue as to which year we’re looking at.

Most of the film’s music was picked after the fact, as the decade-plus of shooting began to come to an end. The logistical advantage of that strategy is clear, as it resulted in what Linklater describes as extreme luck in terms of licensing songs from major artists. (Rap songs proved hard to get because of the complicating nature of samples, he says, and Weezer shut down the use of one of their songs, but otherwise the production scored songs relatively easily.)

There proved to be a strategic advantage too: picking songs more recently allowed Linklater the advantage of knowing which songs would stand the test of time. “You could already look at it from the future,” he explains. “This film is a period film shot in the present.”

For the film’s later scenes, however, the benefit of hindsight was unavailable. Eventually, the consultants’ memories gave way to Linklater’s tastes, his guesses at which songs will hold that power years from now. He recalls that when he was making 2001’s Waking Life he listened to Radiohead’s Kid A and the Flaming Lips’ The Soft Bulletin over and over. (Linklater has been a Flaming Lips fan since the ‘80s and their hit “Do You Realize??” appears in Boyhood.) Those albums were new at the time. Over a decade later, hearing them brings him back.

The album that served that function for Boyhood was Arcade Fire’s The Suburbs. “I met [Arcade Fire’s] Will Butler last year and I was like, ‘Hey man, you don’t know how much that album occupied the last part of this movie,’” Linklater says. The song “Deep Blue” from that album ended up playing over one of the movie’s closing scenes.

There’s just one exception, one song in the film that will summon no memories for viewers. Linklater is one of the only people in the world who might feel differently, as the song that plays over the end credits is a new track that Jeff Tweedy wrote for the movie.

Studies have shown that musical tastes are mostly set by time Linklater’s story ends, by the age at which boyhood begins to be replaced by the specter of adulthood, the barrier that separated Linklater from his music consultants. The filmmaker was aware of that fact, and that’s part of the reason why he was so careful about the music he used: his character was going through the age at which music has the most power to implant itself in memory. For the young, every song is its own moment. With age the music becomes what Linklater calls undifferentiated. The feelings it provokes are, accordingly, less specific—and thus less useful for artistic purposes.

At the same time, his own experience belies that finding. Linklater’s feelings about the music in Boyhood are extremely specific.

In fact, “Hero,” that song his consultant remembered soothing a post-break-up heart, nearly didn’t make the cut. It was the very last song chosen for the film, and Linklater thought it might be, like the George Harrison song, too much. He changed his mind because it was for a moment that needed a little bit of “too much” in order to work.

“You know when it works,” Linklater says of the music. “That’s the good thing. You know it when you finally crack it.” 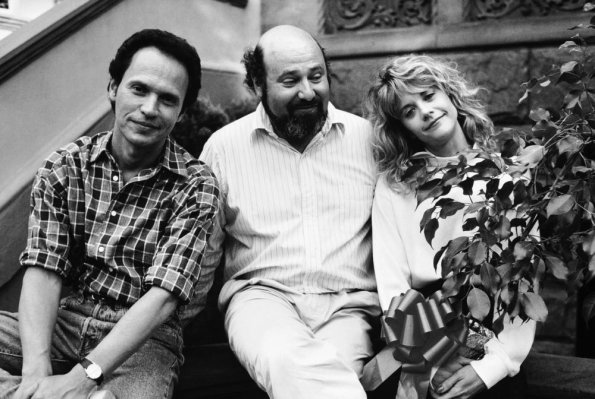 Here's How Rob Reiner Taught Meg Ryan to Fake an Orgasm for When Harry Met Sally
Next Up: Editor's Pick