Scientists Are Getting Closer to a Blood Test for Alzheimer's

A team of scientists have identified 10 proteins in the blood that can predict the onset of Alzheimer’s disease.

The study, which was published in the journal Alzheimer’s & Dementia, looked at more than 1,000 people and is considered a significant step toward the development of a blood test for Alzheimer’s. The trouble with the disease is that developing drug treatments is difficult since they are often given in clinical trials when the disease has already progressed too far. The hope is that identifying the disease earlier could pave the way for drugs to halt its progression.

In the study, researchers examined blood samples from 1,148 people. There were 476 with Alzheimer’s, 220 with ‘Mild Cognitive Impairment’ (MCI) and 452 elderly control subjects who did not have dementia. All the blood samples were tested for 26 proteins that were previously linked to Alzheimer’s, and some the participants also had an MRI scan on their brain. First, the researchers found that 16 of the 26 proteins were strongly linked to brain shrinkage that happens with Alzheimer’s and MCI. In a second round of testing, researchers looked at which of the 16 could predict if MCI became Alzheimer’s. It was then that they found the combination of 10 proteins that were able to predict which people with MCI would eventually get Alzheimer’s within a year. The prediction method had 87% accuracy.

“Memory problems are very common, but the challenge is identifying who is likely to develop dementia,” slead study author Dr. Abdul Hye from the Institute of Psychiatry at King’s College London said in a statement. “There are thousands of proteins in the blood, and this study is the culmination of many years’ work identifying which ones are clinically relevant. We now have a set of 10 proteins that can predict whether someone with early symptoms of memory loss, or mild cognitive impairment, will develop Alzheimer’s disease within a year, with a high level of accuracy.”

Detecting the disease early-on could be a major breakthrough for clinical trials and would be less expensive than current methods that use brain imaging or cerebrospinal spinal fluid to identify the disease. 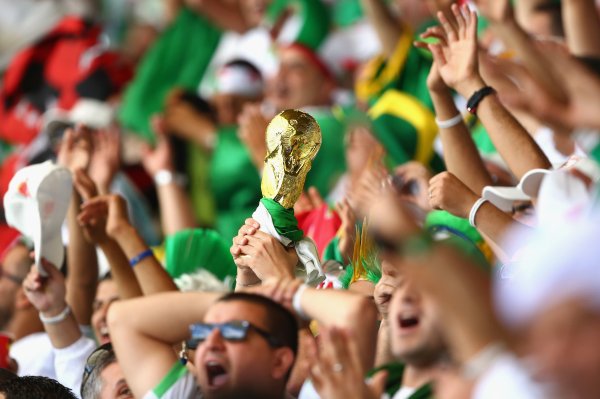 This Infographic Shows Which World Cup Team Has The Loudest Fans
Next Up: Editor's Pick