The World Cup reaches the semifinals this week, starting with Germany taking on host Brazil. A day later, Argentina faces the Netherlands. Although the pre-tournament favorite, Brazil hasn’t done much to back up that designation. Here’s why it could be the end of the road for the Seleção.

1) No-Mar
With Neymar out of the World Cup with a fractured vertebra, the Brazilians not only have lost their best scorer, they’ve lost their talisman, and to some degree their hope. Neymar was willing to put Brazil on his back and carry it. He’s a player whose value extends beyond his incredible skills. And with Thiago Silva suspended because of his own stupidity in getting a second yellow card, Brazil has lost its defensive anchor, too.

2) Brazil’s strikers need to add a syllable (and some goals)
Fred. Hulk. Jo. Brazilian players often go by one name—Pele, Ronaldo, Ronaldinho—but its current crop of monosyllabic frontrunners have come up short on goals. Buy a vowel. That’s why players such as Willian and Ramires need to step in Neymar’s absence.

3) The team is mediocre
It may be the worst thing you can say about Brazil, but it’s what Colombia’s players remarked after the game against them—which Colombia lost 2-1 on two set pieces rather than from the run of play. Mexico players were likewise unimpressed after El Tri’s scoreless draw with the Seleção. The magic that marked great Brazilian teams—when three or four players could each do amazing things— is missing from this outfit. Even worse: teams no longer fear Brazil. Germany certainly won’t be intimidated.

4) Brazil is playing like a team that’s afraid of losing
There’s more pressure on this team than any team in the history of football. How could it not get to them? In fact, it has. Neymar’s loss gives Brazil’s team a soul-saving excuse should it lose to Germany, not exactly a motivating thought.

5) Germany isn’t Colombia
Or even Mexico, and that’s not a good thing. Brazil thrives in a wide-open, up-and-down game. Germany is not likely to allow that kind of freedom, as it showed against France. If the Germans cut down on the space, Brazil is going to find it awfully tough going. So are the spectators.

And here, three reasons not to give up on Brazil

1) It got to the semis, didn’t it?
Brazil has won 4 games and tied one, and although none of those results have been pretty to watch, the team has managed to find a way to progress. Against Colombia, it found a way through a corner kick and a piece of powerful artistry from David Luiz on a magnificent free kick.

2) Again, Germany isn’t Colombia.
Or even Mexico, and that’s a good thing. The Germans have looked less impressive with each subsequent game after pole-axing a weak Portuguese team in their opening match. Against France, it reverted to a circa 1986 model of play, with lots of possession in the back and little going forward. And the winning goal? A header by one of its giant backs after winning a free kick. Boring old Germany.

3) It’s the World Cup and it’s in Brazil.
The script has been written, and Brazil just has to play to play its part. Certainly, the crowd at the Estadio Mineirao in Belo Horizonte is going to turn the joint into a noise avalanche. Brazil’s players just need to ride it to victory. 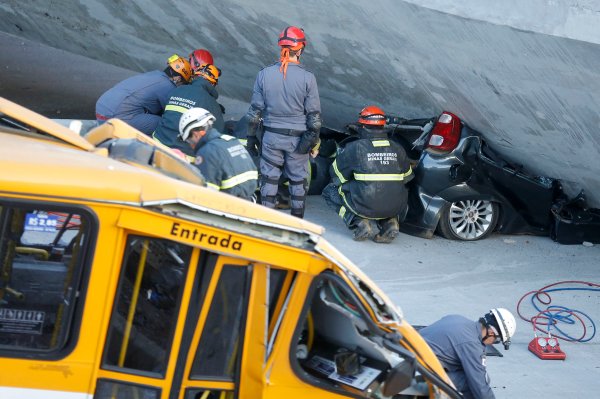 A World Cup Overpass Collapses In Brazil, Killing 2
Next Up: Editor's Pick