Gertrude Weaver holds a flower given to her a day before her 116th birthday at Silver Oaks Health and Rehabilitation in Camden, Ark on July 3, 2014.
Danny Johnston / AP
By Olivia B. Waxman

Gertrude Weaver of Arkansas celebrated her 116th birthday on July 4 and is the new oldest-living American, according to the Gerontology Research Group, which keeps track of super-centenarians worldwide.

The organization’s database administrator Robert Young told the Associated Press that Weaver earned the title after records from the 1900 Census and her 1915 marriage certificate (she wed at 17) confirmed her 1898 birth year. She is now the second-oldest living person, after Misao Okawa of Osaka, Japan, who was born March 5, 1898. Until July 4, the record of oldest living person in the United States was held by Jeralean Talley of Inkster, Michigan, who recently celebrated her 115th birthday on May 23.

When TIME asked how it feels to be the oldest person in the United States right now, Weaver said, “I don’t know. I’ve never been this before.”

The secret to long life is: “Kindness. Treat people right and be nice to other people the way you want them to be nice to you,” she said over the phone, speaking from her room at Silver Oaks Health and Rehabilitation, a nursing home in Camden, Ark., about two hours southwest of the state’s capital city Little Rock. “The Lord blessed me, I think, because I’m good to my family and good to my children and grandchildren. And I feed them.”

Nowadays, the highlights of her week are manicures, Bible study, concerts by singers at schools and church groups, and “wheelchair dancing”, part of an exercise class called “Sittercise,” which she attends three times a week. “We chair dance because we can’t get up anymore,” Weaver says. She is also visited regularly by friends and her granddaughter Gradie Welch, 78, who swings by in the mornings and helps her lay out her clothes for the Sunday church service at the facility. “She is a loving and compassionate grandmother,” Welch tells TIME.

In terms of Weaver’s health, the administrator at Silver Oaks Kathy Langley says she does not suffer from any chronic health conditions, which is generally common for super-centenarians. Weaver says she does not drink or smoke and sleeps well. “I do my sleeping anytime.”

TIME recently reported the prevalence of centenarians in the U.S. population at about 1 per 5,000 and 1 per 5 million for super-centenarians, according to Thomas Perls, director of the New England Centenarian Study at Boston Medical Center, the world’s largest study of centenarians and their families. He argues that the secret to longevity has to do with a rare combination of genes, many of which may be on the X chromosome. Other studies suggest long life may have to do with having strong social ties and just generally being a happy, conscientious and giving person.

Weaver would add trying your best at everything to that list. “Just do what you can, and if we can’t, we can’t.” 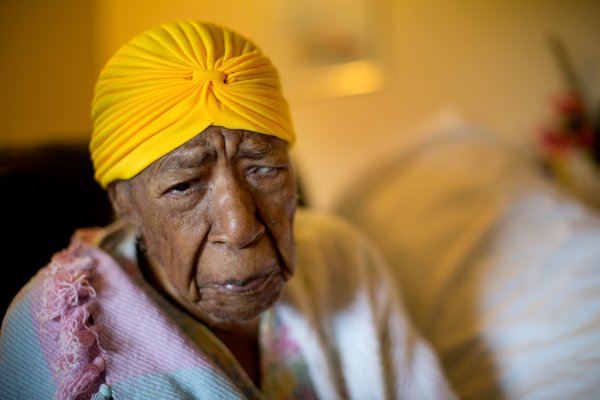 Long-Life Secrets From An (Almost) 115 Year Old Woman
Next Up: Editor's Pick