Princeton Mom: "Stop Acting Like Such an Entitled Princess"

Susan Patton, the Princeton mom who advised female students to spend their college years searching for husbands, is back! And now she says she has the answer to all marital woes: Ladies, you aren’t appreciating your men enough.

“Stop acting like such an entitled princess,” Patton said on Monday’s Fox & Friends. (Patton was responding to a segment from Sunday’s show that focused on what husbands should do for their wives.) “Recognize that there are many women who miss their opportunity entirely to marry and have children. If you’re fortunate enough to have found a man to marry, respect him.”

And for those less fortunate women still waiting on a ring, don’t forget that your clock is ticking. “If you are in your mid-30s or older the idea that you’re going to find yourself another husband, almost impossible,” said self-described human resources specialist and life coach. “And if you don’t believe me ask your maiden aunt, she will tell you when she’s done feeding the cats.”

In order to avoid becoming a cat lady, Patton recommends staying in a marriage regardless of happiness. “Don’t even think that divorce is an option. You work on it. You make it work,” she said. She may have some regrets in that area—the Princeton grad recently finalized her own divorce. 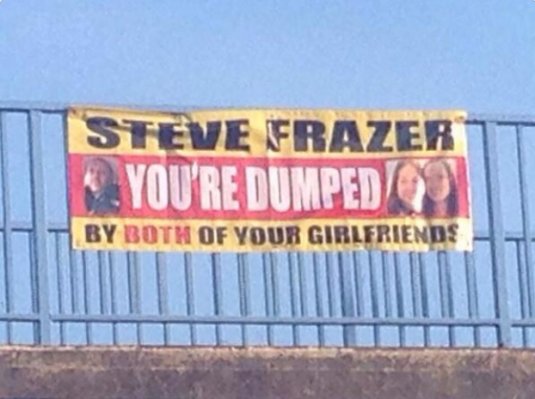 How to Dump a Cheater: Say It With a Freeway Banner
Next Up: Editor's Pick