Magic, or some other supernatural tendency, has had a long and weirdly intimate relationship with the game of soccer.

This isn’t simply a matter of the clairvoyant octopus or turtle that may have accurately predicted the outcome of a World Cup match or two. When Ghana’s national team, for instance, lost to Zambia in the 2012 Africa Cup of Nations, Ghanaian coach Goran Stevanovic pointed to deliberate acts of witchcraft between his players as a plausible explanation for the upset. (Stevanovic, it should be said, was fired shortly afterward.)

So let us be disturbed, but not particularly surprised, by Helio Sillman, the Brazilian “black-magic enthusiast” who, via a voodoo doll in his occult curio shop in northern Rio de Janeiro, has plans to “take [Germany’s] top player and bind his legs so he can’t run on the pitch,” reports AFP.

Brazil will play Germany on Tuesday afternoon in what’ll likely be a riveting match, considering the near infallibility of both teams so far. In the past few weeks, Brazil has trounced Cameroon, Chile, Croatia and Mexico; Sillman has voodoo dolls of players from all four teams sitting in a bowl in his shop. The match results are proof, he says, that his magic works.

The Brazilian team may need all the magic it can get. Neymar, the team’s golden player, apparently fell outside the domain of Sillman’s protective aura when he was kneed in the back during Friday’s quarterfinal match against Colombia, causing a particularly nasty lumbar vertebra fracture that’ll keep him benched for the remainder of the World Cup. 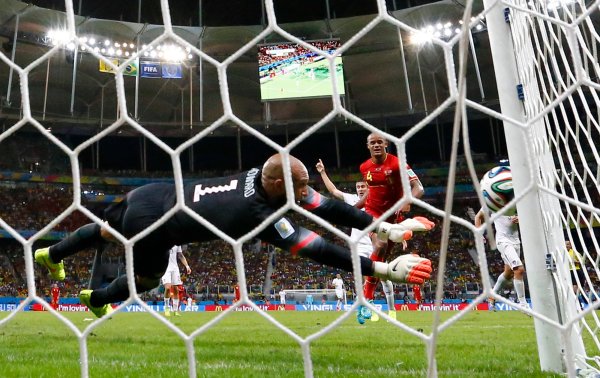 Belgium’s Kompany Gives Shout-Out to Howard
Next Up: Editor's Pick