A series of Israeli airstrikes on the Gaza Strip left seven Hamas gunmen dead early on Monday morning — the largest number of fatalities suffered by the Islamic group in a single military action since a border crossing into Israel in 2012 that resulted in 180 Palestinian deaths.

Israeli military authorities said in a statement that the drone strikes were targeted at nine “terror” areas in order to stop “rocket attacks against southern Israel” directed by Hamas, reports Reuters. The Israeli military added that Hamas had launched 150 rocket strikes from its Gaza stronghold since mid-June. Hamas said the seven Palestinian fighters were killed at Rafah, a southern Gaza town near the Egyptian border, which has a large Hamas presence.

Prime Minister Benjamin Netanyahu on Sunday warned that any larger retaliation against Hamas was to be avoided, as the militant group had rockets capable of reaching far into Israeli territory including Tel Aviv, its financial center. But he advised his Cabinet “to do whatever is necessary” to regain peace in the disrupted communities in southern Israel.

Rising tensions in the area have been catalyzed by several days of clashes in eastern Jerusalem following the July 2 murder of Palestinian teenager Mohammed Abu Khdeir, al-Jazeera reports. Palestinians say the murder was revenge for the kidnapping and slaying in late June of three Israeli teens whose bodies were found near Hebron, a Hamas stronghold. Hamas has not claimed responsibility for the deaths. 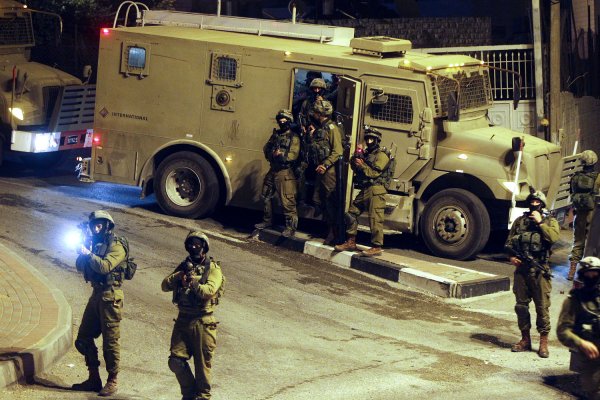 Israel Makes Arrests for Palestinian Murder
Next Up: Editor's Pick