Everything You Need to Know About Mr. Janet Yellen

George Akerlof, husband of Janet Yellen, walks to his seat in the State Dining Room of the White House in Washington, Oct. 9, 2013, where President Obama announced he nominating Yellen to be chair of the Federal Reserve, succeeding Ben Bernanke.
Pablo Martinez Monsivais / AP
By Belinda Luscombe

In Lean In Sheryl Sandberg devotes a chapter—“Make Your Partner a Real Partner” to finding the right guy to marry. “When it comes time to settle down,” she writes, “find someone who wants an equal partner.” In her exclusive interview with new Fed chairman Janet Yellen in TIME this week, Rana Foroohar paints a picture that suggests that Yellen did just that when she wed Nobel prize winning economist George Akerlof.

The couple have been married since 1978, after having dated for only six months. They met at the Fed when they had to sit an overflow table during one of those lunches bureaucrats have with visiting speakers. They have one son, Robbie.

How do a Nobel Prize winner and a high level government official make it all work? Yellen gives Akerlof, 73, who looks a like a more studious Bill Gates, a lot of credit for her success. “Academia is very flexible, but I had a spouse who was very committed to being a completely full partner in our marriage,” Yellen tells Foroohar. This includes full-on fathering. “I think if you counted up how many hours each one of us logged in, he certainly gets more than 50%,” she says.

“When Janet was at the Fed, I supported her as much as possible by taking over household duties,” Akerlof wrote in his autobiographical note for the Nobel committee in 2001. “Later, when she was at the White House my role in providing psychological support in the daily political storms was yet more important.”

Friends have noticed that the couple has a particularly equal relationship. “He’s adjusted his own life to give her what she’s needed. He’s been willing to go to DC, and sit at a desk at the IMF or whatever – his view is, I’m a researcher and a thinker, and I can do that anywhere,” says fellow economist Laura Tyson. “I left Washington because it was a family job — and my family was done with the job. George has been great about making geographic decisions to suit Janet’s career.”

So who is this intriguing Nobel Laureate prepared to put his career on the backburner for his wife? This is what you need to know:

He’s a serious brainiac
He won the Nobel Prize for economics with Joseph Stiglitz, whom he met at M.I.T. and A. Michael Spence for their work on information asymmetry. His paper, “The Market for ‘Lemons,’” which was published when he was 30, showed that markets will collapse if sellers have more information than buyers, because buyers get skittish about all purchases and things of actual value can’t be sold for what they’re worth. Friends say the couple often host dinner parties with other economists, at which everyone discusses wonky and brilliant ideas and that the two love discussing each other’s theories. “It’s wonderful to work with him,” Yellen has said. “He’s so original.”

He’s eccentric
He threw up so often in kindergarten in Pittsburgh that the school asked he not attend any more. (He was allowed to come back in first grade if he sat away from other kids during lunch.) And in his Nobel biographical note he recalled that a teacher at his school “was certain that I had the handwriting of a murderer, a prediction which has so far proven incorrect.” He opened his Nobel Prize Lecture with a reference to Richard Scarry, the children’s author.

He comes from a line of (possibly slightly mad) scientists
After his grandfather was denied tenure at Johns Hopkins (where he had established the nation’s first cardiology clinic) he completely switched fields and became the chairman of the pharmacology department at the University of Minnesota medical school. His father scored a job at Princeton University after he produced titanium rings using his own method of electro-discharge chemistry, but the equipment broke and he couldn’t get it to work again. His brother Carl is an astrophysicist at the University of Michigan. Friends and colleagues say Akerlof is the free thinker who throws a lot of ideas up in the air to see what sticks, and Yellen is the editor who reins him in, and helps him get to his most brilliant work.

He was almost a journalist
He worked for two years as a student reporter on the Yale Daily News, before not being invited back for a third year. “This was probably the best thing that ever happened to me,” he writes. “I would never have been a good reporter because I am not accurate regarding facts.” He then focused all his energy on math and economics.

He’s more liberal than his wife
Akerlof says of the success of his marriage: “Not only did [Yellen’s and my] personalities mesh perfectly, but we have also always been in all but perfect agreement about macroeconomics. Our lone disagreement is that she is a bit more supportive of free trade than I.”

But he’s not an ideologue
One of the papers he and Yellen wrote together looked at why the rise in birth control technology, such as the Pill and safe abortion procedures, had been paralleled by a rise in single motherhood. They concluded that when pregnancy was preventable by women, men felt excused from any responsibility attached to the product of their sexual encounter. This theory was often cited by social conservatives and fans of abstinence-only sex-ed.

Not everyone considered him the perfect husband
He was briefly married to an architect, Kay Leong. They divorced after he didn’t get promoted to full professor at Berkeley, mostly, he says, because of his “monomaniacal” reaction to the slight. She married another architect, also an academic, and moved to New York. He met Yellen within the year.

We’ll be publishing a selection of responses to our Janet Yellen cover story on Time.com. Join the conversation by sending your thoughts to letters@time.com.

Click here to join TIME for as little as $2.99 to read Rana Foroohar’s exclusive interview with Janet Yellen. 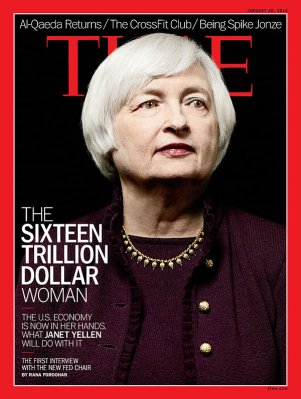 The Most Unprecedented Thing About Janet Yellen
Next Up: Editor's Pick