Randy Newman stepped onto the City Center stage in New York City Tuesday night as the Devil incarnate: he sported a red-lined black cape and, on his gray head, a set of flaming plastic horns. He would be playing Lucifer, he told the audience at the one-night-only performance in the Encores! Off-Center summer series, in “my version of Goethe’s Faust. His Faust, of course, is a masterpiece. I read the classic comic book, and I concur. Is my Faust the equal of Goethe’s?” Pause. “Only time will tell.”

Time moves slowly for those who would make theater of the folk tale about a man who is tempted to sell his soul to the Devil. Goethe began work on his two Faust plays when he was 23 and continued until his death 60 years later, in 1832. Nearly two centuries later, his unwieldy tragedy is ranked among the triumphs of German literature.

Newman, the 70-year-old Oscar-, Grammy- and Emmy-winning pop composer, has been Fausting for a meager two decades. The piece first appeared as a concept album in 1995, with Newman in the role of the Devil (Mephistopheles in Goethe’s version), James Taylor as the Lord, Don Henley as Faust, Linda Ronstadt as his beloved Margaret, Bonnie Raitt as Margaret’s friend Martha and Elton John as a British angel named Rick.

Newman might have devoted his energy to Broadway scores, as earlier pop songwriters like Irving Berlin and Frank Loesser had done. But Broadway didn’t welcome music in the pop-rock vein, until top-40 tunes had become classics suitable for greatest-hits shows like Jersey Boys and Beautiful. And maybe the collaborative discipline of writing for the stage didn’t appeal to the hermit-y Newman. At the Faust curtain call he seemed embarrassed by the theatrical tradition of cast members’ joining hands. Every note that night sounded full and fine, but when it came time to bow, Newman was out of synch. It may have been his first time on a New York stage; it may be his last.

So no Broadway. Newman created hits for others (“I Think It’s Gonna Rain Today,” “Mama Told Me Not to Come”) and himself (“Short People,” “I Love L.A.”); and his 1974 “Louisiana 1927” (“They’re trying to wash us away”) became the anthem-dirge for New Orleans after the Katrina hurricane. Like his uncles Alfred, Lionel and Emil, and his cousins David and Thomas, he composed lush film scores (Ragtime, Pleasantville). And, in what some observers consider his career deal with the Devil, he contributed chipper jingles to Pixar movies, winning Original Song Oscars for “If I Didn’t Have You” from Monsters, Inc. and “We Belong Together” from Toy Story 3. His only full song-score was for Disney’s The Princess and the Frog: nine lovely songs with a bluesy New Orleans lilt.

(READ: Corliss’s review of The Princess and the Frog)

Briefly, Faust looked to follow the trail of other pop concept albums — Jesus Christ Superstar, Tommy, Evita, Chess, Les Misérables — that were turned into musical-theater standards. Shortly after the album was released, Faust got a staging at San Diego’s La Jolla Playhouse, and then at Chicago’s Goodman Theatre, with David Mamet reshaping the libretto. Producer Lorne Michaels announced his intention to bring the show to New York City, but it never got here — until it played this week, a block and a half from Broadway, in an extension of City Center’s acclaimed Encores! series of musical revivals.

(READ: Why Encores! is the best thing nearly on Broadway)

On the evidence of this week’s performance — with a stripped-down book, a glittery Broadway cast directed by Thomas Kail, an 11-piece orchestra and the 15-member Inspirational Voices serving as the Lord’s gospel choir — Newman’s Faust may not quite measure up to Goethe’s, or to Gounod’s 1859 opera. As a song cycle, it’s also a bit below Newman’s finest albums, Good Old Boys (1974) and Land of Dreams (1988). The songs are a series of sardonic, occasionally angry, often moving statements that work individually but don’t quite cohere. It’s closer to vaudeville, of the most sumptuous, acerbic sort.

In tone and viewpoint, this is the anti-Faust, an atheist’s Faust. Newman proposes that belief in God, let alone in a human soul, is its own cosmic comedy. In his first number, the Devil offers the Lord (Isaiah Johnson, from Peter and the Starcatcher) a pocket history of organized religion: “Some fools in the desert / With nothing else to do, / So scared of the dark / They didn’t know if they were coming or going, / So they invented me / And they invented You. / And other fools will keep it all going / And growing.”

(READ: a 1954 review of Gounod’s Faust by subscribing to TIME)

In Newman’s telling, the Lord is kin to the God described by Peter Cook’s Satan to Dudley Moore’s Faust in their 1967 film comedy Bedazzled: an egotist who created Earth and Heaven for no reason other than to have his creatures perpetually glorify Him in speech and song. For a moment Cook plays God and asks Moore to be Lucifer: “dance around, praising Me,” for all eternity. Moore soon says, “I’m getting a bit bored with this. Can’t we change places?” And Cook replies, “That’s exactly how I felt.”

Newman’s Lucifer — called Luci by his divine frenemy — is no less rancorous toward the Lord’s complacency. Yet he doesn’t agree with Milton’s Satan, in Paradise Lost, that it’s “better to reign in Hell than serve in Heav’n.” Tired of the ease with which mankind falls into sin, and then into Hell, he’s eager to get back home. So he bets the Lord that he can convince a human, any human, to sell his soul to the Devil; the stake is Luci’s restored status in Heaven as God’s most beautiful Archangel.

The earthling in question is Henry Faust (Tony Vincent, who sang Judas in the 2000 Jesus Christ Superstar revival and St. Jimmy in American Idiot). Instead of Goethe’s noble scholar, this Faust is a selfish creep “in his eighth year as a sophomore” at Notre Dame — a true American idiot, and a violent one, who’s “got suicide and murder runnin’ in and out my brain.” When the Devil tells him he can have all worldly glory in exchange for his immortal soul, Henry asks, “So what’s the catch?”; he doesn’t believe in a soul either. He befriends the sweet Margaret (Laura Osnes, who played the title role in the revival of Rodgers and Hammerstein’s Cinderella) and impregnates her; she goes mad, sings a lullaby to their baby — the lovely “Sandman’s Comin’ Soon” — and drowns it, then dies.

Margaret’s poignant Calvary is straight from Newman’s source. He drolly describes it as “the comic high point of Goethe’s original play, and one of the most delightfully urbane moments in all of German literature.” But it’s just one of the small atrocities Newman presents to strengthen his argument that God’s world is a place of egregious imbalance. In “Best Little Girl,” the Devil tells of a churchgoing sweetie whom he coaxes into a date with a lifeguard; the two “were found the next day / Drowned in their own vomit.”

Later, an Angel Child (sweet little Brooklyn Shuck) tries to console the Devil, singing, “Perhaps when you were little / No one held you in their arms / And told you that they loved you very much.” The Devil has to remind her that, two years earlier, the girl was shot and killed by a man who went unpunished, got rich and, when he dies, will “be whisked right up to Heaven.” Relating this tale gives the Devil no pleasure. “Why? / You may ask yourself why. / For thousands and thousands of years / I have asked myself why.” If life and death are unfair, then the greatest sinner must be the puppet master — God.

So Newman’s Faust is a cantankerous debate not between Faust and Mephistopheles but between a God who may not exist and a Devil reduced to cynicism by observing the pain that humans inflict and endure. That theme is more suitable for a balladeer whose lyrics crawl inside the bitter sentiments of the ignorant or the dispossessed, and which he performs in the croak of a surly hobo.

And as Newman’s song often encase misanthropic words in angelic ragtime melodies, so his listeners always had to infer the ironic abrasion between the songwriter and the views of the characters he creates. How many people heard his 2012 “I’m Dreaming (of a White President),” which mocks the attitudes of some of Obama’s most vicious detractors — and for which Newman suggested a donation to the United Negro College Fund — as a vindication of their wistful racism? “I’d like it to be clearer which side I’m on,” the deadpan satirist told Slate. “Of course, it comes a little late.”

(WATCH AND LISTEN: The video for Randy Newman’s “I’m Dreaming”)

A similar gulf opened in this week’s Faust. How much amusement were we to take from the world’s miseries, even when sung? Answer: Plenty. The author-performer provided some when his Devil, early in the show, takes a comic hit from the Lord’s dismissal of “those stupid old shuffle songs” that Newman has been writing for five decades; later, in the midst of playing and singing “Never Good Enough,” he mutters, “He could be right about those shuffles.”

The audience was in an exuberant mood throughout, taking Newman’s bleak jaundice as jauntiness, laughing off the apostasy and loving those shuffles. I think the crowd got a contact high from just being present at the only New York performance a Newman musical was ever likely to see, and given thrilling voice by the entire cast. Michael Cerveris, a Tony-winner for Steven Sondheim’s Assassins, parlayed his one song, “Little Island,” into a poignant requiem for the British Empire. Vincent tore the house down with Faust’s thunderous “Bless the Children of the World,” then Osnes lifted it up with the tender “Gainesville” (“I have tried all my life to be kind to others / Even when others were unkind to me”). Sweet music trumps sour lyrics every time.

The closest Faust came to having a hit song, or a pure love song, was “Feels Like Home,” performed originally by Raitt and covered by Ronstadt in a trio with Dolly Parton and Emmylou Harris. A depressive’s prayer of redemption, it received a splendidly throaty reading by Vonda Shepard, the Ally McBeal piano-bar singer cast here as Martha, with Newman joining in. It was one of those moments unique to theater: you could sense the people on stage and those in City Center’s 2,257 seats united in awe.

At song’s end, the audience erupted in grateful cheers — and Newman quickly wiped a tear from his right eye. You see, scoffers and believers alike: the Devil Randy has a heart. Maybe even a soul. 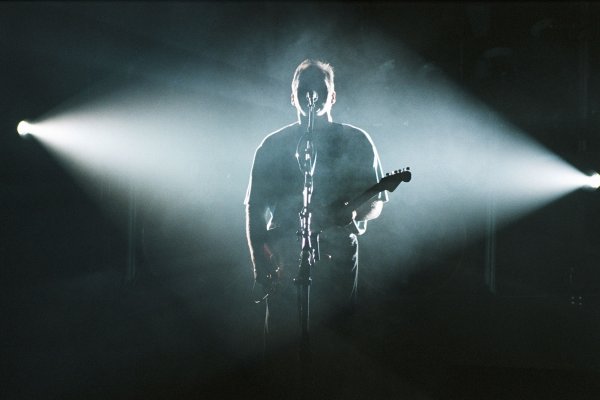 Pink Floyd's First Album in 20 Years Due in October
Next Up: Editor's Pick