Cancer Wages Its Own War Against Syrian Refugees

It was just before Syrian civilians started rising up against their government in 2011 that Fayhaa al-Dahr, 22, from the northern city of Raqqa, noticed a strange swelling in her neck. Doctors advised surgery to excise the tumors growing on her vocal chords, but even though Syria has one of the best government-subsidized medical systems in the Middle East, the operations and the follow-up treatment would be expensive.

To pay for al-Dahr’s care, her father sold some land than had been in the family for generations. When another tumor appeared, he sold more land. By the time the third tumor was taken care of, there was no more land to be sold, and the uprising had turned into a war that made it impossible for al-Dahr to travel to the capital for her chemotherapy appointments. When a rocket destroyed her home in December, al-Dahr and her family saw no choice but to take refuge in neighboring Lebanon. At least there, they believed, al-Dahr could continue her treatments. They were wrong.

Lebanon is host to some 1.1 million Syrian refugees, part of an exodus of 2.9 million seeking shelter from a war that has claimed more than 160,000 lives and has wrought untold damages to the middle-income country. Unlike refugees fleeing conflicts in Africa, where diseases of poverty such as diarrhea, malaria or cholera take their toll, Syrian refugees are afflicted with chronic and costly illnesses like diabetes, heart disease and cancer. The international humanitarian agencies that provide for refugees the world over simply do not have the funds to treat these diseases, leaving many, like al-Dahr, without access to proper medical care. Her cancer has metastasized, and she now has a tumor in her upper thigh so excruciating, she says, “I am living on painkillers.”

A recent study published in The Lancet Oncology journal documented a high demand for cancer treatments among refugees from the recent conflicts in Iraq and Syria, with host countries and refugee organizations struggling to find the money and the medicines to help. Cancer, writes Dr. Paul Spiegel, Chief Medical Expert at United Nations High Commissioner for Refugees (UNHCR), is likely to play a much greater role in refugee care going forward. “Cancer diagnosis and care in humanitarian emergencies typifies a growing trend toward more costly chronic disease care. Something that …. is of increasing importance because the number of refugees is growing.”

As it is, the UNHCR warned on July 3 that the organization had received only 30 percent of its $3.74 billion budget for Syrian refugee programs for this year, a shortfall that would see many vital programs, including health care, slashed.

Al-Dahr’s doctor in Damascus had warned her of the consequences of missing chemotherapy appointments, and when she first arrived in Lebanon, she did try to continue her treatment. But the costs—$1,900—were twice what she paid in Damascus. Her family was able to borrow enough cash to pay for one round in January, but when her Lebanese doctor called a few weeks later to remind her of her follow up, she knew she couldn’t afford another session. “He was very worried about me, and called several times to beg me to come, but there was nothing we could do and nothing he could do.” The doctor may have been willing to volunteer his time and expertise, but the drug and hospital costs are immutable.

“It’s a sad story,” says Dr. Dr. Elie Bechara, an oncologist in Beirut who works with other doctors to treat refugees pro-bono. “We are overwhelmed by these cases from Syria. Sometimes we are standing still, watching, and we are not able to help them. It is frustrating.”

Lebanon boasts some of the finest medical facilities in the Middle East, but nearly 90% are privately run, and most of them are for profit. UNHCR has spent tens of millions of dollars on treatment for refugees at private hospitals, but funds are limited. With the rising number of refugees — 1.5 million, a third of the Lebanese population, are expected to have registered by the end of the year — costs too will rise, forcing UNHCR to choose between funding emergency care and primary health clinics that can save thousands of lives and spending thousands of dollars to save one life.

Last year UNHCR covered medical treatment for 41,500 refugees in Lebanon, but each of those cases was judged on specific criteria: the cost of the intervention against the chances of a positive outcome. “It’s a horrible decision to have to make,” says Spiegel. “If there is a poor prognosis, we can’t go that route. It doesn’t mean the patients won’t get treatment—they may search elsewhere, and sometimes embassies or private donors step in—but we can’t afford to help where there is no hope.”

Palliative care, at least, is not that expensive, adds Spiegel. “We never say, ‘There is nothing we can do, go away.’ We just say we can’t treat the cancer but we will treat the consequences.” Al-Dahr falls into that category. Instead of chemotherapy, she gets painkiller injections at her local pharmacy, and she tries not to dwell on her illness. “When you don’t know what is going to happen, it is better to stay in the present,” she says. “Thinking about the future only brings more problems.”

Given the funding shortages, cases like al-Dahr’s are likely to become more common, says Spiegel. “Syria is our biggest and most expensive operation to date, and there is a question of how long donors will continue supporting it as things get worse. If we continue like this, there will be more like this woman who will not be able to receive treatment.”

Like a cancer patient with a poor prognosis, Syria is starting to look like a hopeless cause, and thus less likely to receive aid. 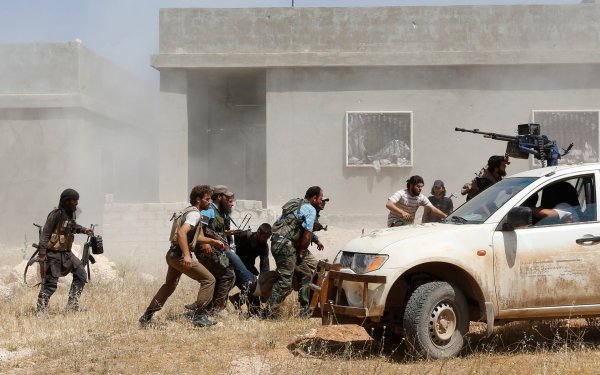