On Thursday, the Supreme Court ruled that an evangelical college in Illinois will not have to fill out a form offered to religious nonprofits that would effectively transfer the cost of its employees’ contraceptives to insurers. Wheaton College argues that doing so would “trigger” emergency contraceptive coverage and is therefore still against the institution’s religious beliefs.

The court said that Wheaton College does not have to file the contested forms while the case is on appeal. Instead, the college should write the Department of Health and Human Services (HHS) declaring that it is a religious nonprofit organization that, according to Obamacare, is exempt from paying for contraceptives because of a religious objection.

Justices Ruth Bader Ginsburg, Elena Kagan and Sonia Sotomayor dissented, saying they would have made the college fill out the form. “Those who are bound by our decisions usually believe they can take us at our word,” wrote Sotomayor in the dissent. “Not so today.”

“Let me be absolutely clear: I do not doubt that Wheaton genuinely believes that signing the self-certification form is contrary to its religious beliefs,” she wrote. “But thinking one’s religious beliefs are substantially burdened … does not make it so.” She added, “Not every sincerely felt ‘burden’ is a ‘substantial’ one, and it is for courts, not litigants, to identify which are.”

The ruling is just part of an ongoing legal battle over the Affordable Care Act. On Tuesday, the Supreme Court ruled in Sebelius v. Hobby Lobby that the Christian-minded arts-and-crafts chain, Hobby Lobby, would not have to offer coverage of certain contraceptives, including Plan B and the IUD, in their employees’ health plans because they believe that those types of birth control amount to abortion. The Affordable Care Act has previously required that for-profit companies cover such birth control, though nonprofit religious organizations (like churches) were exempt and could pass on the burden to the insurance company. In the Tuesday ruling, Justice Samuel Alito suggested that HHS could extend the accommodations that they have in place for religious nonprofits to for-profit companies so the insurer would provide birth control without charging the company.

But Wheaton’s objection to the accommodation suggests that both for-profit and nonprofit organizations with religious affiliations would be unhappy with that solution since they believe they’re still enabling the purchase of contraceptives. So far a total of 122 religious nonprofits have sued. In her dissent, Sotomayor points out the hypocrisy in Justice Alito’s argument for the Hobby Lobby decision in the wake of this new ruling. 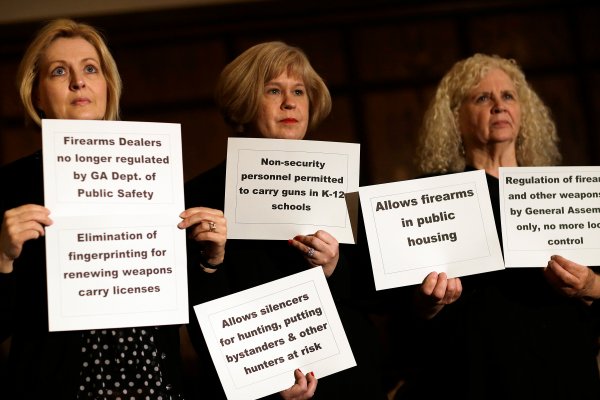 The Dangers of Georgia's New Gun Law
Next Up: Editor's Pick