World Cup Cheat Sheet: No Tim Howard, But Some Great Games Ahead

Bummer about the U.S., isn’t it? Tim Howard deserved another game just on his performance alone. But let’s be honest, you can’t suddenly start attacking after you’re down 2-0 and expect to win. Lack of attack is what often happens as underdog teams get deeper into the World Cup. But the quarterfinals promise a lot more attacking, and are well worth watching, even if you’re just a casual fan.

France vs. Germany (Friday, 12 noon ET): No European team ever lacks motivation to play against Germany. The grudge list of history is too long. But for France, it’s more about redeeming the reputation of Les Bleus, which the team trashed in the 2010 World Cup, following a player revolt against Raymond Domenech, the coach from another planet. Relatively speaking, the current French squad is playing blissfully. Coach Didier Deschamps has a lot of buttons to push, from precocious Paul Pogba and the vibrant Mathieu Valbuena in the midfield, Karim Benzema and Olivier Giroud up front and the world-class Hugo Lloris in goal. Germany has looked less impressive every game so far, gasping for air against the suffocating Algerian pressure until Andre Schuerrle rescued die Mannschaft in extra time. Germany coach Joachim Loew is probably busy tinkering with the parts of his Bayern Munich-centered team —Thomas Mueller, Bastian Schweinsteiger, Philipp Lahm— as well as the lethargic Mesut Özil, to get them to produce more power. Right now Loew has a Mercedes sedan and he needs an F-1 model. The Germans, as you know, are very good mechanics. This game is going to be about French style vs. German muscle, and style is looking good.

Brazil vs. Colombia (Friday 4 p.m.): Which team would you rather be coaching? The glamorous home side, the famous Seleção of Brazil, or the guys from the country nearby? Brazil coach Big Phil Scolari’s team was on the verge of collectively wetting its pants against Chile. The pressure to win is so great that Scolari had to bring in a psychologist to consult some emotion-wracked players after the narrow penalty-kick shootout win over the Chileans. But if you are Colombia’s coach José Pekerman, you can just tell your team, “Take it to’em, boys.” Colombia is a team playing without its leading scorer but, more importantly, playing without fear. And it has the wondrous James Rodriguez in the middle—the Monaco man’s price has skyrocketed during this tournament— creating highlight reel goals. Colombia will feel free to go at Brazil’s vulnerable defense, which features wingbacks like Marcelo who just hate hanging around their own end of the field. Brazil will also be missing Luis Gustavo, who has held its midfield together. Brazil’s offense, run by the endlessly inventive Neymar, lacks any cohesive imagination in its attack. There’s no beauty in Brazil’s beautiful game at moment. The Seleção had better find some, or the party could well end this weekend.

Argentina vs. Belgium (Saturday 12 p.m.): Game after game, Argentina has faced opponents trying to frustrate its attack at all costs. The Swiss erected massed ranks of defenders in front of its goal like so many Alps, and waited to counterattack. It’s a strategy that almost worked but for another burst of genius from Lionel Messi to set up Angel di Maria’s winning goal. Belgium, like Switzerland, is a small country, but unlike the Swiss, the Belgians are loaded with talent. They are here to play, not defend. Against the U.S., midfielder Kevin de Bruyne spent 68% of the game in the American end of the field, leading endless attacks. So did Eden Hazard, whose penchant for getting behind defenses should worry Argentina. Then again, if Messi is on your team, you can relax a little bit, knowing that he’s capable of miracles. Not that Argentina should need them. In a wide-open game, with players like di Maria and Sergio Aguero surging forward, this match could restore the high scoring that marked the group stage, and should restore Argentina as a favorite to win it all.

Netherlands vs. Costa Rica (Saturday 4 p.m.): The Ticos are one of the last teams that anyone would figure to reach the quarters, but its qualifying and World Cup run has been impressive. Costa Rica beat Uruguay, Italy and Greece, and drew with England. Led by Bryan Ruiz, who only recently had a hard time getting a game with Fulham, the Ticos have also handled Mexico, a team that gave the Oranje fits in the round of 16. Still, any team featuring Robin van Persie, Arjen Robben and Wesley Sneijder is going to be a handful, as Spain learned. Each player has the ability to change a game in an instant, although Robben’s conspicuous diving—it ought to be a red card offense— is hardly recommended viewing. Don’t expect the Ticos to be awed by this much talent; do expect them to be done in by it. 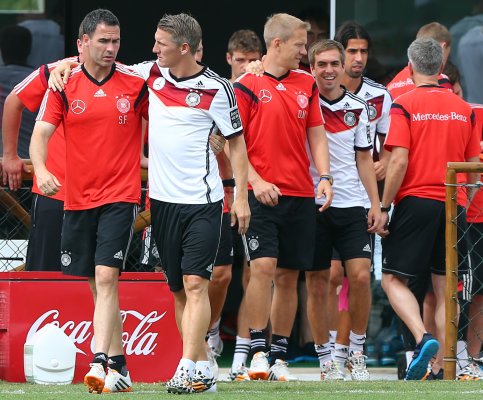 An American Assist in Germany's World Cup Quest
Next Up: Editor's Pick