Brazil's Neymar reacts as his team celebrates their penalty shootout win against Chile at the Mineirao Stadium in Belo Horizonte, Brazil on June 28, 2014.
Toru Hanai—Reuters

Are our players cracking up? It’s the question all of Brazil is asking in the run up to the national team’s quarter-final clash against Colombia on Friday.

No country has in the history of the tournament ever been under so much pressure to win the World Cup as Brazil is this year, and the signs are that their players are struggling to cope.

Captain Thiago Silva and goalkeeper Júlio César were overcome by tears at the end of extra time in Saturday’s game against Chile–before the dramatic penalty shoot-out that saw Brazil scrape through.

“Make no mistake. [Coach Luiz Felipe Scolari] is startled by the tearfulness of the players, the emotional state of some experienced athletes and the difficulty of lowering the adrenaline levels.” wrote Luiz Antonio Prosperi, the sports editor of the Estado de S. Paulo. “It’s as if the snake is killing itself with its own poison.”

Brazil began the tournament as overwhelming favorites. Not only has the country more World Cup victories than any other, but it won the Confederations Cup last year and has the extra advantage of playing in front of a home crowd.

Confidence within the team was sky high. “I believe 100 per cent that Brazil will win the World Cup,” said Scolari last year. “We already have one hand on the trophy,” Scolari’s deputy Carlos Alberto Parreira said a few weeks ago.

Yet even though Brazil topped their group in the opening stage, they have not been playing well and very nearly were knocked out by Chile in the Round of 16, which Scolari said would have been the greatest humiliation in the history of Brazilian soccer.

Anything less than outright victory will be deemed a failure. This is always the case for Brazil in World Cups, but the situation is worse this time because of they are hosts.

And people remember what happened in 1950, the last time the tournament was in Brazil.

Brazil was the favorite, but lost to Uruguay in the final group stage match. Keeper Barbosa, who was judged to have made a mistake in Uruguay’s winning goal, became a nation’s scapegoat.

Before his death, virtually penniless, in 2000, he used to say: “Under Brazilian law the maximum sentence is thirty years. But my imprisonment has been for fifty.”

“No one wants to be Barbosa,” Márcio Santos, a member of Brazil’s 1994 World Cup winning side, has said.

Earlier this week the psychologist Regina Brandão, who has worked with Scolari since 1993, visited the Brazilian training camp in the hills near Rio de Janeiro.

“We have a good relationship with her,” said Brazil’s star player Neymar after she met the players. “She has helped us and I am learning a lot of stuff.”

Neymar denied that the team was choking. “No one has emotional problems. The [Chile] game was emotional and I got emotional, but we are all well and are prepared to take on Colombia and, God willing, go through to the next stage.”

As the team’s outstanding talent, Neymar, aged 22, is under the most pressure to perform and he has looked relaxed and comfortable during most of the competition, scoring four goals already and converting Brazil’s final penalty in the shoot-out against Chile.

Yet he wept during the national anthem before the game against Mexico, perhaps a sign of the vulnerability that was much talked about after the game.

But the player who has looked most troubled by pressure is Thiago Silva, Brazil’s captain, who at the end of extra time in the Chile game left his teammates to sit on a ball on his own, where he cried and prayed.

Discussion this week about the national team has been as much about the mental state of the players as it has been about the tactics. One concern is that the team is very young, with only two players in the current line up who were also starters in 2010.

Vinicius Mota, of the Folha de S. Paulo, wrote: “Scolari’s team is vulnerable because of the noticeable immaturity of its players….It is not their age but the way that they have been isolated from daily life since the moment they became successful sportsmen. For almost everything they do they have assistants to help. On the pitch, with the hopes of millions of Brazilians on their shoulders, the spoilt children don’t have anyone to run to. They choke. They let themselves be dominated by weaker opponents. They cry.”

Yet there are those who believe that the team has showed guts to get this far, such as Tostão, who played alongside Pelé in the 1970 World Cup winning team.

“It is fashionable to say that the biggest problem of the national team is emotional,” he wrote in a column, “that the players can’t handle the pressure and cry too much, as if crying was incompatible with reason and lucidity. I think the opposite. What will save this team is the emotional involvement of the players, pushed on by the fans and by the pressure of playing at home.”

Whatever happens against Colombia Friday– there won’t be a dry eye in the house. 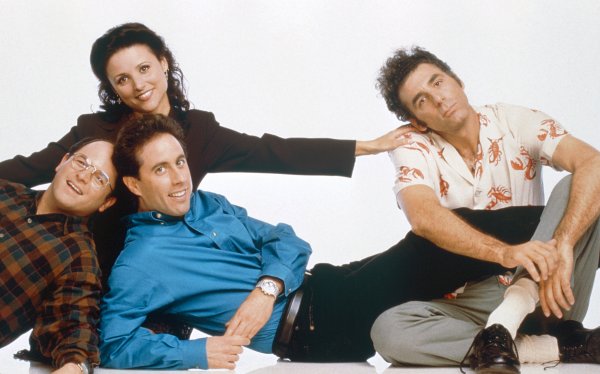 Seinfeld at 25: There's Still Nothing Else Like It
Next Up: Editor's Pick