Louis Zamperini gestures during a news conference, in Pasadena, Calif. Zamperini, a U.S. Olympic distance runner and World War II veteran who survived 47 days on a raft in the Pacific after his bomber crashed, then endured two years in Japanese prison camps, died Wednesday, July 2, 2014.
Nick Ut—AP
By Aleksandra Gjorgievska

Louis Zamperini, a World War II veteran who ran for the U.S. track and field team at the 1936 Olympics and later survived two years in Japanese prison camps, died Wednesday. He was 97 and had been battling pneumonia, his family said.

“He recently faced the greatest challenge of his life with a life-threatening case of pneumonia,” Zamperini’s family said in a statement. “After a 40-day long battle for his life, he peacefully passed away in the presence of his entire family, leaving behind a legacy that has touched so many lives. His indomitable courage and fighting spirit were never more apparent than in these last days.”

At age 19, Zamperini—who was born to Italian immigrant parents and grew up in Torrance, Calif.—qualified to run in the 1936 Olympic Games in Berlin, becoming the youngest-ever American Olympic qualifier for the 5,000 meters category. He placed eighth, having run his last lap in 56 seconds—a feat that caught the attention of Adolf Hitler, who insisted on meeting him. Zamperini then set his sights on the 1940 Tokyo Olympics, but his plans were interrupted by the onset of war. He enlisted in the U.S. Army Air Corps in 1941.

In 1943, Zamperini survived a plane crash in the Pacific Ocean, after which he floated on an open raft for over a month before being imprisoned by Japanese sailors. Zamperini and another survivor spent the following two years in a series of prisoner of war camps, where they were subjected to repeated torture and starvation. Zamperini authored two autobiographies, one in 1956 and another in 2003, both titled Devil at My Heels. His survival story has also been chronicled by Laura Hillenbrand in her 2010 best-selling book Unbroken. A movie with the same title—based on Hillenbrand’s book and directed by Angelina Jolie—is set to be released by Universal Pictures in December. 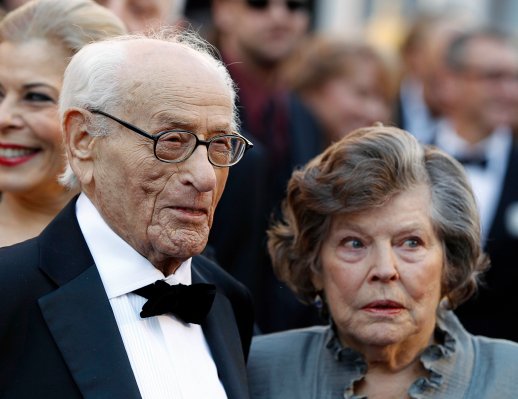 Versatile Actor Eli Wallach Dies at 98
Next Up: Editor's Pick