Israeli Military Asks Hamas to Calm Things Down in Gaza

The Israeli military said Thursday that it hoped to cool tensions in Palestinian territories, not long after it had boasted about the number of times it struck the Gaza Strip and amid growing unrest over the killing of a Palestinian teenager.

“I think the main motto that the IDF is trying to pursue right now is a status of de-escalation,” Lt. Col. Peter Lerner, a spokesman for the Israel Defense Forces, said in a conference call with reporters. “Indeed, we are conveying to Hamas in various channels—open and back room messages to Hamas—to de-escalate, to restore a sense of security, to bring down the level of violence.”

The appeal for calm came after Hamas began launching rockets from Gaza, following months of Israeli efforts to stymie rocket launches toward populated areas from the isolated Palestinian coastal enclave. The Islamist militant group was apparently reacting to the slaying of Muhammad Hussein Abu Khdeir, 16, in a possible revenge attack on Wednesday after the burial of three kidnapped Israeli teenagers the day earlier. Israel blames the militants for their deaths and has been pounding the Hamas-controlled Gaza Strip for the last two weeks, including 15 air strikes overnight that left at least 11 people injured.

Israel has also been shifting troops to the Gaza border as Prime Minister Benjamin Netanyahu mulls how to respond to the deaths of the Israeli teens. But that response may well be muted by outrage over Abu Khdeir’s death, following his reported abduction hours after a nighttime march by Jewish extremists chanting “Death to the Arabs.”

Lerner emphasized that the only reservists called up were headed for headquarters and that infantry were summoned primarily to “reinforce” Israeli communities near Gaza. The largest of those communities, Sderot, had two close calls in the last 24 hours: A direct hit on a house and another missile that penetrated a home where children had assembled for a summer camp. The missile did not explode and no injuries were reported.

Some 20 rockets were launched on Wednesday, many by Hamas, whose ballistic missiles are identifiable by their longer range and larger warheads. “More precise, more powerful,” Lerner said.

Lerner said Israel was hoping to similarly ease tensions on the West Bank, where thousands of security forces were dispatched to crush Hamas’ infrastructure and arrest hundreds of activists under the operational umbrella of a search for the Israeli teens. Soldiers had been cautioned on the rules of engagement and were alert for a spillover of the protests that erupted in East Jerusalem after Abu Khdeir’s death. Fridays are always a potential flash point, especially during the Muslim holy month of Ramadan, which began this week.

The main concern, however, appeared to be Gaza. “We do not want to have more exchanges with Hamas,” Lerner said. “But we do need to be prepared. …. It’s a challenge, and we hope Hamas will respond.” 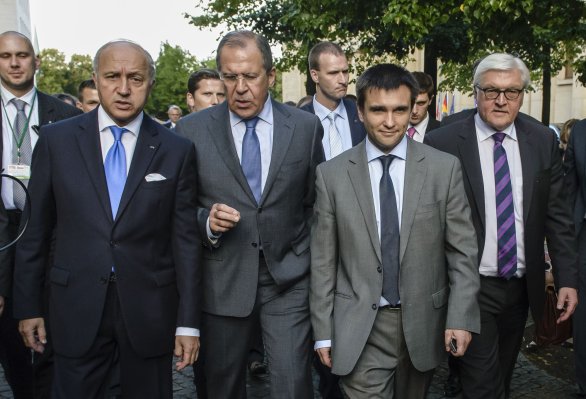 Ukraine Talks Peace, But the Fighting Rages On
Next Up: Editor's Pick