Being the mayor of Murrieta, Calif., is only a part-time job, and Alan Long, who’s held the post since January, earns his living as a battalion chief in a nearby fire department. There, he’s in charge of emergency management and preparedness, skills that have been particularly handy in recent days.

Now Long and Murrieta, a midsize city about halfway between Los Angeles and San Diego, have become a new flash point in the fierce and often contentious debate over how to handle a recent crush of children and families streaming across the Mexican border. In what’s been called a humanitarian crisis, from October 2013 to June 2014, more than 50,000 unaccompanied minors were caught illegally crossing the border, according to federal officials. More than half of the children came from Honduras, Guatemala and El Salvador, seeking refuge from violence in their home countries and lured by rumors that it’s easy to obtain legal status in the U.S.

The tidal wave has prompted border-patrol offices in Texas, overwhelmed by the sheer numbers of children and families, to transfer undocumented immigrants to processing facilities in other states. The move has raised concerns that a broken federal immigration system is burdening local communities far beyond the border.

This concern came to a head Tuesday, when protesters in Murrieta confronted several buses transporting 140 immigrants to a border-patrol center there. The passengers — presumably all undocumented and said to be children and parents — had been apprehended in Texas and flown to San Diego when they boarded buses bound for Murrieta. But facing a roadside crowd stationed blocks from the processing center and carrying signs that said, “Stop Illegal Immigration,” “Return to Sender” and “No New Illegals,” the border-patrol agents on board turned back and went to a center in San Diego instead.

“I wasn’t surprised the protest happened,” Long told TIME in an interview. Rumors of the immigrants’ arrival had been swirling in the city for weeks. On Monday, Long held a news conference in which he confirmed that 140 immigrants would land in San Diego at 11 a.m. on Tuesday and travel by bus to Murrieta that afternoon. Long said he never intended to incite a protest and that local residents most concerned about the immigrant transfer already knew about it, even without his announcement. He said he was just trying bat down false information being passed around the community — including that the immigrants on the way were criminals or carrying diseases — and present the hard facts.

“I’m getting credit for organizing this protest, but I’ve never organized or told people to protest,” Long said.

Rather, he said he hoped to encourage Murrieta residents to contact elected officials in Washington and urge them to repair the immigration system and beef up border enforcement. Calls from Murrieta to members of Congress may have taken place at Long’s urging, but the protest itself has garnered far more attention and been held up by anti-illegal-immigration activists as proof that locals can stand their ground against the intrusion of undocumented immigrants and by immigrant-rights activists as an example of xenophobia and compassionless behavior at its worst.

Long, who was born in the U.S. but is ethnically half-Mexican, said Murrieta residents are concerned that a large influx of undocumented immigrants will strain local resources. Judging by comments made by some residents at Long’s Monday news conference, they’re also concerned that undocumented immigrants will be released into their community en masse. “They’re going to be dumped in minivans throughout the county,” one woman present said.

Immigrants like those on the bus to Murrieta typically face three possible scenarios, according to Immigration and Customs Enforcement (ICE). If they are a threat to public safety or national security, they could be detained. Those who are not eligible to attain legal status could be deported, although that process often takes time. If they are not a threat, pass background checks and health screenings and have a claim that they could obtain legal status, they could be released into a community in California or elsewhere and monitored while their application is reviewed. Monitoring, according to ICE, can include electronic bracelets, in-person required check-ins, voice-recognition telephonic software or in-home visits by immigration officials. Immigrants who believe they may be able to attain legal status risk that if they do not comply with monitoring requirements.

It’s not clear whether the border patrol will try to transport another group of immigrants to Murrieta. But already, Long said, more rumors in the community are swirling.

“We are a very compassionate community,” Long said. “We understand these immigrants are coming from a less desirable location. It’s not about them. We’re opposing the federal system that’s broken.” 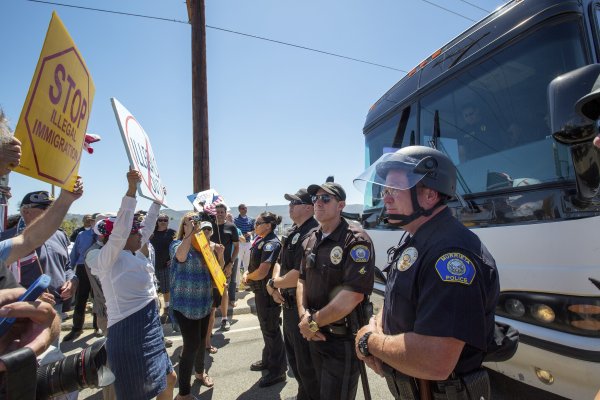