Maisie Williams — the actress behind fan-favorite Arya Stark on Game of Thrones — just passed the written portion of her driver’s license test. But that’s not the only reason she’s psyched. Heatstroke, the teenage actress’ first-ever movie and her second professional acting gig, is arriving in theaters and on VOD on July 4.

“This is the first time I’ve actually spoken about the film. This is really exciting for me, to actually be able to talk about this a bit more. It’s not been quite as secret as Game of Thrones but that doesn’t mean it’s any less exciting,” she tells TIME. “You hear about so many child stars who have their one movie or one series and then that’s it. I remember [getting cast] just being like a breath, like, this is my future. It’s all very well people saying Game of Thrones is the biggest show ever, but you have to keep up with that.”

And making a movie proved to be a new experience, despite her experience with Thrones. For example, Williams says she still doesn’t know all the Thrones crew members, because the operation is so massive, but that Heatstroke was on a smaller scale, so she got a better sense of what was going on behind the scenes. On the other hand, there are some similarities between the projects: in Heatstroke, she plays a rebellious teen whose trip to Africa with her hyena-researcher father turns deadly, leaving her to make a dangerous trek across a hostile landscape — which isn’t so far from what she’s been through on Thrones recently. Plus, her experience with direwolves (sort of) came in handy: Williams says that her favorite moments on set were working with the live hyenas involved in the story.

“It was absolutely amazing to be that close to a hyena, this legit wild animal. It’s not like a tiger or a polar bear that if you go to a zoo you can see in captivity. I just feel like humans have made those sort of animals so much less impressive by bringing them into our world, but something like a hyena, you don’t see that every day,” she says. “They came so close, they were nibbling my shoelaces and breathed on me.”

Which is not to say that Williams knows whether any Heatstroke-Game of Thrones comparisons will hold up when the HBO show returns for its fifth season, which hasn’t started filming yet (though it’s been confirmed that portions will be shot in Spain). “We haven’t got the scripts, we haven’t got our schedule, we haven’t got anything like that,” she says of the next season of Thrones. “Everyone thinks that we know everything. They’re like, Can you spoil anything for the new season? We’re like, We don’t have a clue. No one tells us. We’re waiting like everyone else.”

And that’s another thing for her to be excited about: finding out. Williams says that the time between the Thrones season finale and the beginning of shooting the next season can be an odd time, full of a feeling of being “left in the middle,” but that she’s heard rumors that new scripts will be coming through soon. Not that she’ll tell anyone when she does know what happens to Arya next.

“As soon as you do spoil something, they’ll be the first ones to tell you that you’ve ruined it and you’re so annoying,” she says. “People act like they want to know, but they really don’t.” 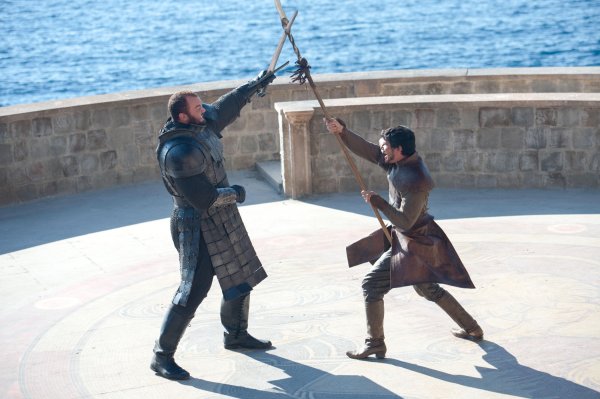 <i>Game of Thrones</i> Headed to Spain for Season 5
Next Up: Editor's Pick