President Barack Obama pauses while speaking about transportation and the economy on July 1, 2014, at the Georgetown Waterfront Park in Washington.
Charles Dharapak—AP
By Eliana Dockterman

The pay gap between men and women working at the White House has not narrowed since President Barack Obama’s first year in office, according to a new report, despite Obama’s emphasis on pay equity ahead of the midterm elections.

One explanation for the gap is that there are more men than women in higher-paying, senior jobs at the White House: 87 male White House officials earn more $100,000, compared to 53 women. “At the White House, we have equal pay for equal work,” White House spokeswoman Jessica Santillo told the Post. “Men and women in equivalent roles earn equivalent salaries, and over half of our departments are run by women.” She added that the White House is working to place more women in senior positions.

Obama has argued throughout the year that raising the minimum wage would help women and has signed two executive orders that aim make workplace pay more transparent and allow women to discover if they are earning less for the same job. The executive orders only apply to federal contractors, but the president has also pushed the Paycheck Fairness Act, which would mandate the same transparency for the general workforce.

“A woman deserves equal pay for equal work,” Obama said in this year’s State of the Union address.

“She deserves to have a baby without sacrificing her job,” Obama added.

Other parts of the federal government have a similar wage gap. But the 13% gap is still better than that of the nation as a whole, which by one measure has a 23.5% disparity. 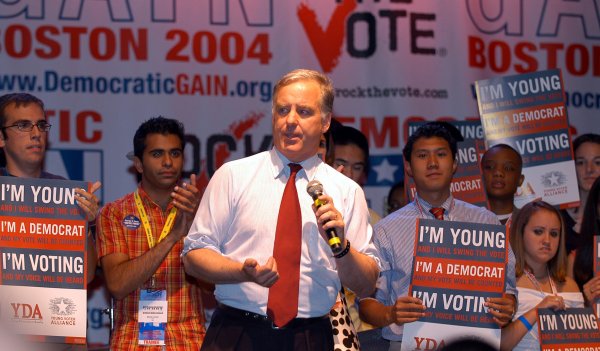 How Howard Dean's Scream Helped Obama Land the Presidency
Next Up: Editor's Pick