TV personality Adam Richman arrives at the Los Angeles Premiere 'A Million Ways To Die In The West' on May 15, 2014 at Regency Village Theatre in Westwood, California. (Photo by Barry King/FilmMagic)
Barry King—FilmMagic
By Eliana Dockterman

The Travel Channel has announced it will indefinitely postpone a new show featuring host Adam Richman, star of the Travel Channel’s Man v. Food, after the TV personality made some insensitive comments about dieting in an Instagram post.

Last month, Richman posted a picture of himself on Instagram showing off his new body. The TV host—who has made a name for himself taking massive food challenges like eating a yard-long bratwurst or 72-ounce steaks—dropped 70 pounds over the course of 2013 (and more since). “Had ordered this suit from a Saville Row tailor over a year ago. Think I’m gonna need to take it in a little,” he wrote in the Instagram post, adding the hashtag #thinspiration.

Whether Richman knew it or not, #thinspiration has earned a reputation in pro-anorexia and pro-bulimia circles as a slogan encouraging eating disorders. In 2012, Instagram (following in the footsteps of Pinterest and Tumblr) banned thinspiration or “thinspo” photos meant to inspire others to lose weight in unhealthy ways from the social media site. Though many of these photos were aimed at women, more recently health professionals have worried about eating and workout disorders in men, who seek not only to lose weight but gain muscle in unhealthy ways.

The backlash to Richman’s comments was swift: many were offended by a celebrity’s use of #thispiration and ridiculed him. The TV host defended himself, writing,:

But he didn’t stop there. After another wave of negative comments, Richman wrote to one of his critics: “Grab a razor blade and draw a bath. I doubt anyone will miss you.” The exchange has been captured by screen grabs on XOJane.

Richman later tweeted an apology, which has since been deleted. “Yes. I’ve responded to internet hate recently with vile words directed at those hating me. I am sorry, I should know better & will do better,” he tweeted, according to screen grabs captured by Jezebel. He followed with another (now deleted) tweet: “In real life, if you say stuff you regret in anger, you cool down, apologize & move on.If you’re a celeb on social media – it becomes a blog.” Richman claimed on Instagram that he did not know the history of #thinspiration.

Following the controversy, the Travel Channel has postponed Richman’s new show Man Finds Food, which was supposed to premiered on July 2. The channel has yet to announce a new date for the show. 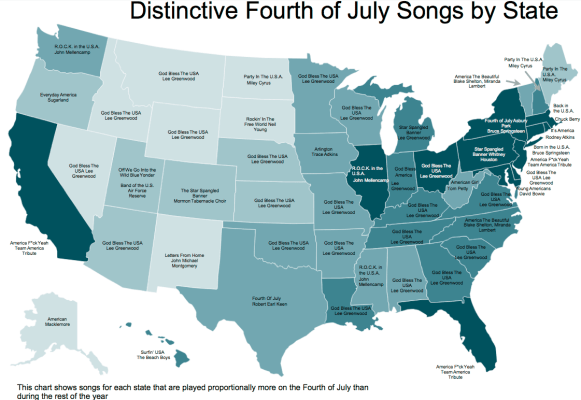 This Map Shows The Most Popular "Fourth of July" Songs in Each State
Next Up: Editor's Pick