Paralympian Oscar Pistorius sits in the dock during his murder trial at the High Court in Pretoria, on July 2, 2014.
Gianluigi Guercia—AFP/Getty Images
By Mirren Gidda

Oscar Pistorius is suffering from post-traumatic stress disorder and could commit suicide, according to a psychologist’s report heard at his trial Wednesday.

The report, which was read out by the Olympic athlete’s defense lawyer Barry Roux, claimed he was traumatized by the death of the girlfriend he claims he accidentally killed, the BBC reports. Pistorius was charged with Steenkamp’s murder after he repeatedly shot her on Feb. 14, 2013. The athlete claims he mistook Steenkamp for an intruder.

“The degree of anxiety and depression that is present is significant, he is also mourning the loss of Miss Steenkamp,” Roux read out. “Should he not receive proper clinical care, his condition is likely to worsen and increase the risk for suicide.” This new report follows one heard by the court Monday that said Pistorius wasn’t suffering from a mental disorder at the time of the killing.

The prosecution, led by Gerrie Nel, has alleged that double-amputee Pistorius deliberately shot the model and law graduate after the couple had an argument.

Neither prosecution nor defense has challenged this second report as both sides can use it to their advantage. The prosecution, led by Gerrie Nel said the report shows Pistorius can recognize right and wrong and so can be held responsible for his actions.

Roux said the report, a culmination of a month of psychiatric evaluation, showed Pistorius had a history of feeling insecure, in part because of his reliance on prosthetic legs. It also found no signs of narcissism or explosive rage that can characterize abusive men, he said.

Pistorius has denied the murder charge. If convicted he faces a minimum jail sentence of 25 years. 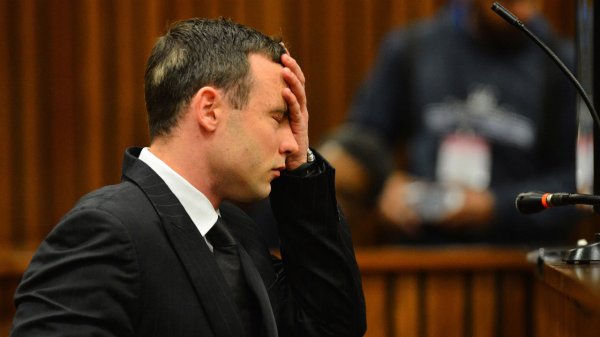 Psych Eval Rules Pistorius Wasn’t Mentally Ill When He Shot His Girlfriend
Next Up: Editor's Pick