Belgium Beat the U.S. Because They Played a Better Game

Finally, Tim Howard could no longer save his team. Two minutes into overtime, Belgium’s Kevin De Bruyne collected yet another loose ball after yet another U.S. breakdown, to score past Howard to take a 1-0 lead in their round-of-16 game. And when Romelu Lukaku added what seemed to be the finishing touch from a De Bruyne assist a few minutes later, the American World Cup dream finally looked to be over. The disappointment was coast to coast, as millions of people stopped work or gathered in stadiums and outdoor venues to watch.

Then the game exploded back to life. Down two goals in extra time, U.S. coach Jürgen Klinsmann played his last card, the German-American teenager Julian Green, brought on for a sniff of Cup experience. But when the fresh-legged Green connected with Michael Bradley’s pass to flick the ball past Thibaut Courtois with his first touch, it was suddenly game on. Late, very late, too late, the Americans took the initiative. A Jermaine Jones flick went just wide. At 113 minutes a rare designed play on a free kick — Bradley to Jones to Clint Dempsey — nearly sprung the trap, with Courtois providing the game-saving block against Dempsey. Jones smashed one high four minutes later.

To be blunt, this was a game that Belgium richly deserved to win. The Red Devils were the better team and maintained nearly constant pressure on the U.S. defense for the bulk of the game. With Eden Hazard running down the left wing and De Bruyne everywhere else, the Red Devils tilted the playing field from the early minutes. The first U.S. shot didn’t take place until the 21st minute, when Jones, who had an incredible World Cup, swept a pass toward Courtois, who was largely untroubled until that incredible overtime.

Amazingly enough, the U.S. had a chance to steal the game in regulation, during injury time when substitute Chris Wondolowski — another surprise move by Klinsmann — found himself alone in front of goal with Jones’ headed pass settling at his feet. But Wondo whiffed, sweeping the ball high and wide with his right foot, and American chances for a smash-and-grab job went with it.

In soccer, you get punished for giving up possession. It happened to Switzerland earlier in the day against Argentina. And throughout the course of a lopsided game, Belgium almost made the U.S. pay dearly for its lack of possession of the football. But there was Howard to bail them time and time, again. But eventually, something has to give. “It’s a bummer,” said Klinsmann. “We were so close. But I think we can all be very, very proud of this team.” So does an entirely new generation of American fans. 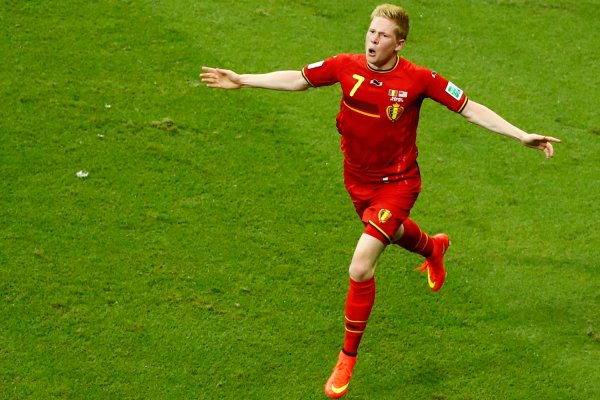 No, Twitter, Prince Harry Did Not Score for Belgium
Next Up: Editor's Pick