Behind the counter at a Burger King in the heart of San Francisco is a rainbow-colored menu board advertising a product that the fast-food behemoth has never sold before and isn’t selling anywhere else: The Proud Whopper.

When customers visiting during Sunday’s pride parade asked cashiers what made this Whopper different from a standard-issue burger, they simply said, “I don’t know.” The mystery was revealed once diners opened the rainbow-colored wrapper and got a taste: absolutely nothing is different about this burger, nothing at all. To emphasize the point, the interior of the wrapper comes with a second message: “We Are All the Same Inside.”

The campaign was conceived just a few months ago as a way for Burger King to bring the company’s new “Be Your Way” tagline to life. Fernando Machado, a senior vice president of global branding, led the effort, which included on-the-spot filming of customers’ reactions outside the location at Market and 8th Streets. (This post will be updated to include the video once it is available.) “As a brand, we welcome everyone,” Machado tells TIME. “We felt that [the Proud Whopper] could bring to life a message of equality, self-expression, authenticity and just being who you are.”

Even in the liberal bastion that is the City by the Bay, not all the responses were positive. In a rough cut of the reaction video, one bystander says, “Well, if that’s what they’re gonna do, they won’t be having my business anymore.” Others smile, some cry out of solidarity, many express their support. One, hilariously, questions whether “gay people even eat fast food.”

Burger King also sponsored pride parades in New York and San Francisco, both of which took place this past weekend, and the company gave out about 70,000 rainbow-colored paper crowns. Machado says that he knows their clear signal of support for the LGBT community isn’t going to float everyone’s boat. “As with anything in life, there will be people who will like it, there will people who will dislike it,” he says. “We just hope that people will understand that the message is a beautiful one.”

In the fast food world, the Proud Whopper campaign puts Burger King in stark contrast to Chick-fil-A, which is still trying to move past anti-same-sex marriage comments made by CEO Dan Cathy, prompting gay couples to stage “kiss-in” protests in 2012. Machado says this effort isn’t designed to be a contrast. “Frankly we were not concerned about benchmarking ourselves compared to other brands,” he says. “We were much more concerned to do what was right for our brand.”

Burger King scrapped their 40-year-old food-centric slogan “Have It Your Way” in May, replacing it with the people-centric “Be Your Way.” Machado says it’s all about making a connection with customers. “We really want to be more than burgers, fries and shakes,” he says, “and occupy a space that’s more meaningful to people.”

The Proud Whoppers, which went on sale June 28, will be available at the San Francisco location throughout San Francisco Pride week. 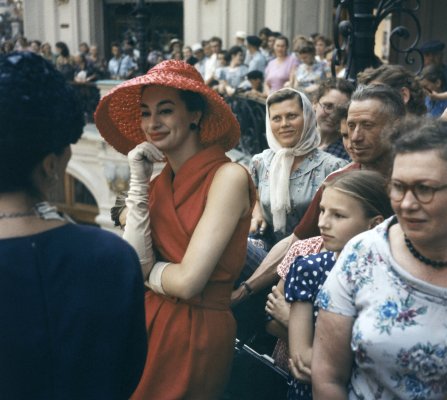 Haute Couture and the Cold War: Dior in Moscow, 1959
Next Up: Editor's Pick