Turkey's Erdogan Plans to Go From Premiership to Presidency

Turkey's Prime Minister Recep Tayyip Erdogan greets Justice and Development Party members at a meeting, in which he is named as his party's candidate for the country's first direct presidential election, in Ankara on July 1, 2014
Umit Bektas—Reuters
By Piotr Zalewski

It was fine pantomime, but it was also a sign of political things to come.

Back in May, Recep Tayyip Erdogan, Turkey’s famously irascible Prime Minister, lost his temper at an official function as a prominent lawyer berated his government. “This kind of rudeness is unimaginable,” he yelled. “You’re lying.” Turkey’s President, Abdullah Gul, tried to calm Erdogan but failed. The Prime Minister eventually made it known he was leaving the venue in protest. Then, in a gesture that seemed to be far less of an entreaty than a command, he motioned for the President to do likewise. Gul, obligingly, made his way toward the door.

On Tuesday, less than two months later, Erdogan confirmed what his body language had earlier suggested — that the key decisions about Turkey’s political future were his to make, that he would be the Islamist-rooted Justice and Development Party’s (AKP) candidate in an Aug. 10 presidential election, and that Gul, his political ally, would head for the exit.

In an emotional speech at an AKP rally in Ankara in front of 4,000 party faithful, Erdogan pledged to transform the office to which he aspires from a largely ceremonial post into the main node of executive power. “This is no simple technical change,” he said, referring to a constitutional amendment that will see Turkey’s President elected by popular vote for the first time. “A President elected by the people and not by Parliament … is a turning point for democracy,” he said. “A popular election will invest the presidency with strong legitimacy and real meaning.”

To most Turks, Erdogan’s decision to enter the race did not come as a surprise. Earlier this year, the AKP decided to cap at three the number of terms that its members can serve in parliament, a rule that would have prevented Erdogan from returning as Prime Minister. Gul, meanwhile, confirmed that he would not run for re-election over the weekend.

Over the past year, Erdogan has had to contend with a series of antigovernment protests, a major corruption scandal, fallout from the deadliest industrial disaster in Turkish history and, most recently, a hostage crisis in Iraq. He appears to have weathered it all. Most opinion polls now give him over 50% of the vote, enough to defeat his main challenger, Ekmeleddin Ihsanoglu, a former head of the Organization of Islamic Cooperation, in the first round.

Ihsanoglu has practically “no chance” of stopping Erdogan’s march toward the presidency, says Turkish columnist Kadri Gursel, as the candidate of an opposition that is “incapable of managing political processes, perceptions and political communication.” The two main opposition parties waited until mid-June to unveil the septuagenarian Ihsanoglu as their joint candidate, ensuring that he would remain an unfamiliar, untested product by the time Turks went to the polls. Days later, several members of the secularist opposition made it clear Ihsanoglu was far from their preferred nominee.

Tuesday’s announcement may have put an end to the speculation about Erdogan’s political future, but it has left a number of other questions unanswered. Turks still have no clue as to who will replace Erdogan as Prime Minister should he win, and whether he intends to stay on in his current job should he lose.

But if Erdogan does win the presidency, says Gursel, it will only strengthen his iron grip over Turkish politics and his party. “It will be the continuation of his premiership,” he says, “and even in a more powerful manner”

“Erdogan will dictate the main lines of policy that should be followed and the [new] Prime Minister will apply them,” he says. “This will be one-man rule.”

Others think that Erdogan risks overplaying his hand. “He thinks he’ll get the majority in the 2015 parliamentary election, change the constitution and [implement] a presidential system, but I think it’s going to be difficult,” says Cenk Sidar, managing director of consultancy firm Sidar Global Advisors, based in Washington, D.C. In the end, “he may get stuck as regular President, a figurehead,” he says.

Erdogan himself appears confident he will remain Turkey’s de facto leader for the foreseeable future, constitutional changes or not. Across the country, his face beams from billboards proclaiming “Target 2023,” the year when Turks will celebrate the centenary of their republic. Erdogan plans to be master of ceremonies. Should he win the presidency, then repeat in 2019, he will get his wish.

“Today,” he said on Tuesday, announcing his bid for the presidency, “we are getting ready for a beautiful journey.” 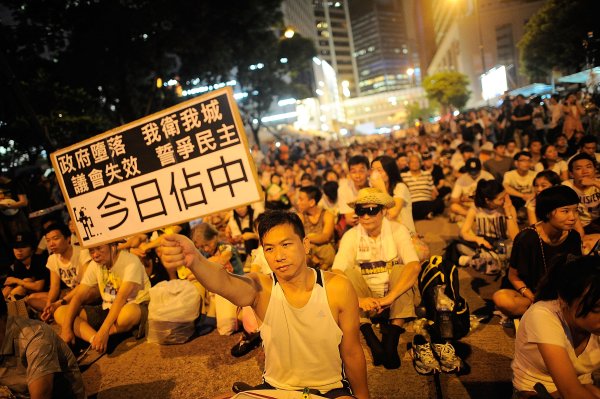 Large Crowds Rally in Hong Kong for Democracy
Next Up: Editor's Pick