Under the new policy, Japan’s powerful but low-profile military would be allowed to defend friends and allies under attack for the first time, even overseas. It’s part of a new interpretation of Japan’s war-renouncing constitution that Abe has pushed since taking office 18 months ago.

But ending the ban on so-called collective self-defense comes amid widespread public opposition. Thousands of protesters ringed Abe’s office during his televised announcement. A middle-aged man in a business suit set himself afire in protest in downtown Tokyo on Sunday — a shocking event in normally docile Japan.

But in many ways, the new policy merely formalizes the linguist sleight-of-hand that has allowed an officially pacifist nation to maintain a military of 250,000 well-trained and well-equipped troops in the first place.

“This is not a game changer,” says Brad Glosserman, executive director of the Pacific Forum CSIS in Honolulu. “The Japanese have always been able to find a way to do whatever was needed to defend their interests and meet their obligations under the U.S.-Japan Security Treaty. What this does is allow them to do things more openly.”

At issue is Article 9 of the constitution, written in the early days of the U.S. occupation of 1945–52. The article formally renounces Japan’s right to wage war or maintain a military:

Various interpretations over the years have allowed Japan to develop robust air, land and sea forces and maintain the right to defend itself against attack, should that ever be necessary (so far, it hasn’t). Until now, however, Japan’s Self-Defense Forces have operated on the premise that they could not come to the aid of friendly countries — like the U.S., for example — unless the Japanese were directly attacked as well.

Abe says that has to change. North Korea’s development of nuclear warheads and long-range missiles, and China’s growing defense spending and military assertiveness, means that no country in the region can defend itself on its own, according to Abe. If Japan wants to count on its friends, its friends must be able to count on Japan too.

“The most important thing is that this makes it possible for us to work more closely with countries in the region to maintain the balance of power and deterrence vis-à-vis China. Unless Japan can exercise the right of collective self-defense, we can’t even participate in joint training exercises, even in peacetime,” says Narushige Michishita, director of the Security and International Studies Program at the National Graduate Institute for Policy Studies in Tokyo.

Abe has been pushing an aggressive defense agenda even as he’s struggled to right Japan’s ailing economy. He has organized a new National Security Council, rammed through a tough new state-secrets law and ordered a small but important increase in defense spending.

But ending the ban on collective self-defense has been a hard sell, even to Abe’s own ruling block. Resistance from within his coalition forced a milder version of the policy than recommended by a handpicked advisory committee earlier this year. Abe has attempted to placate concerns by vowing Japan would never abandon its pacifist ideals. Under no circumstances, he said Tuesday, would Japanese troops be sent to fight in wars like those in Iraq or Afghanistan, even if the new policy permits.

“We shall never repeat the horror of war. With this reflection in mind, Japan has gone on for 70 years after the war. It will never happen that Japan again becomes a country which goes to war,” Abe said.

The public may need more convincing. In a Kyodo News poll over the weekend, 55.4% of respondents expressed opposition to Abe’s plan, up from 48.1% just a month ago. Thousands of well-dressed, mostly middle-class citizens protested overnight Monday and Tuesday in front of Abe’s official residence at the perceived shift from Japan’s pacifist post-WWII constitution. “The current constitution is the result of the sacrifice of more than three million Japanese and more than 20 million Asian victims of war,” Yoshihiko Murata, a 74-year-old protester, told the Guardian. “We should value it more.”

On Sunday, a man spoke calmly for 30 minutes against the new policy from a pedestrian bridge near the busy Shinjuku train station, then doused himself with gasoline and set himself on fire. The man survived, though his current condition is not known. Although the incident was largely ignored by Japan’s mainstream news media, the incident lit up the country’s busy social media and scores of videos were posted on YouTube and other sites, garnering more than a million views.

The U.S. welcomes the new policy, as have leaders in Australia and the Philippines. The reaction in China and South Korea, which suffered mightily during Japan’s era of wartime and colonial expansion, has been less sanguine, of course. Michishita says the new policy is unlikely to make much practical difference. Japan has not had to invoke its right of individual self-defense since the end of World War II. If deterrence works, the same should hold for collective self-defense.

“People might expect us to do more now that we have the right to exercise collective self-defense, but we might end up doing not much more, and that might actually undermine the confidence of people in the region in Japan,” he says. “They could end up saying, ‘Well, after all this fuss, Japan is not going to do anything significantly different.’” 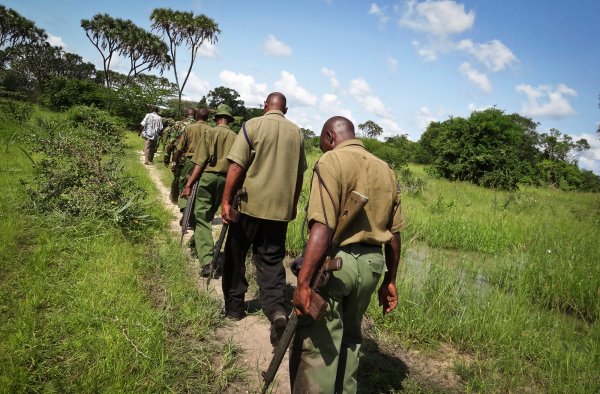 Kenya Faces Homegrown Threat From Al-Shabab
Next Up: Editor's Pick