SALVADOR, Brazil – They may not chant it like their American counterparts, but Belgians also believe that they will win.

Two years of hype, their players’ success at the club level and three wins during the World Cup’s group stage have Red Devils fans feeling pretty good heading into Tuesday’s round-of-16 showdown with the U.S. here in Brazil’s original capital. That’s according to American midfielder Sacha Kljestan, who’s had a front-row seat on Belgium’s emergence as a World Cup contender while playing for Brussels-based power Anderlecht, which claimed its third consecutive league title in May.

“Every car has Belgian flags on it. People are wearing the jerseys everywhere. People are behind the team and I do think they’re fully expecting to beat the U.S.,” said Kljestan, who left MLS for Brussels in 2010 and fell short of earning a spot in Jurgen Klinsmann’s World Cup roster. “Belgium played them twice in the last three years [in exhibitions] and won both times. I don’t know if the national team is going to be overconfident but I feel like the people here are confident they’re going to beat the U.S.”

Belgium defeated Klinsmann and Co., 1-0, in Brussels in Sept. 2011, shortly after the new coach took over, and then again, 4-2, last year in Cleveland.

U.S. defender Omar Gonzalez said there were mitigating circumstances in 2013, when the Americans had just one day of training before facing Belgium. But nine of the 11 U.S. starters that day have been key contributors at this World Cup, and they were torn apart by the talented and dynamic Red Devils. That match was indicative of Belgium’s performance over the past two years. It stormed through World Cup qualifying, finishing 8-0-2 in a group that included Croatia and Serbia, and has lost only three of 24 games in that span, all friendlies.

“It’s a very good team, a team full of players who are playing at the highest level in Europe for the biggest clubs,” U.S. midfielder Michael Bradley said. “A country that doesn’t have the history of Germany or Italy or some of these countries, but when you look over the past few years, when you look at the quality of their players, it certainly has to be talked about as one of the best teams in Europe.”

Indeed, Belgium lacks that history. Its heyday came in the 1980s, when it won the silver medal at the 1980 European Championship and finished fourth at the World Cup six years later. But like many of Europe’s second-tier soccer nations, Belgium had difficulty sustaining its success. It’s most recent appearance at a major tournament (before this summer) came back at the 2002 World Cup. Those fallow periods aren’t uncommon. Countries like Sweden, Turkey, Croatia or Portugal will find themselves blessed with a “golden generation” of players, make a run and then fall back to the pack, hoping the cycle eventually repeats itself.

For Belgium, that time is now.

“They have only one player, [Daniel] van Buyten, who’s even played in a World Cup or a European Championship before, so I think they’re trying to be realistic,” Kljestan said. “But it’s hard not to get your hopes up when you see how talented the group is.”

WATCH: World Cup Round of 16 Preview: USA vs. Belgium

Fourteen of the 23 players on Belgium’s roster were on the books at clubs that competed in last season’s UEFA Champions League (if you count Julian Green, a Bayern Munich reserve, the U.S. had two), and that doesn’t include the men who turn out for the likes of Liverpool, Tottenham Hotpsur and Everton. Goalkeeper Thibaut Courtois and right back Toby Alderweireld won La Liga, and nearly the Champions League, with Atlético Madrid.

Kljestan said he couldn’t put his finger on the precise reason for the Belgian renaissance, but he does have a few ideas. He recalled the visit his older brother, Gordon, paid to Brussels in 2011. A retired midfielder who bounced between MLS and the U.S. minor leagues, Gordon Kljestan now works for the L.A. Galaxy. Back in 2011, he was helping the MLS club with its youth development and spent time studying the system at Anderlecht, which produced the likes of Belgium and Manchester City captain Vincent Kompany, Manchester United’s Marouane Fellaini and Adnan Januzaj and Everton (on loan from Chelsea) striker Romelu Lukaku.

“They start them young here,” Sacha Kljestan said. “The Anderlecht academy has children at under-6 and Gordon saw a group of like 10, 11, 12 year-olds, they did a thing every other day at school – most of them went to the same school – where just before lunch they took an hour and did a technical training session. And then they had their lunch and went back to class. That’s something we would never dream about doing in the U.S.”

Not every academy player attends the same school, but Anderlecht helps arrange it for those who want to, including for kids who might hail from elsewhere but choose to live with a family in Brussels.

They have players playing multiple positions, too,” Kljestan said. “When they bring guys up to the first team that are young guys, they stick a forward out on the wing a little bit, move them around, and these guys know how to play. I think they just understand soccer. They can’t just play one – they have to have an understanding how to play multiple positions. That’s important in the learning process.”

That education helps forge chemistry at the World Cup level. No team has won the sport’s most coveted trophy without at least 10 players from its domestic league on the tournament roster. Belgium has only three. Kljestan said there may not be a “specific Belgian style of play,” but the tactical and technical training its players get from a young age helps them adapt and thrive.

“People compare Belgium and Holland because they’re right next to each other,” he said. “I think Belgium is a more organized, defensive league and I guess you can see that in their national team. I think Belgium is really well organized and their defense is really strong. That’s their most important piece.”

Belgium yielded just one goal during the first round, although no one would claim that a quartet including Algeria, Russia and South Korea was among the tournament’s toughest. It faces significant injury issues heading into Tuesday’s match with the U.S. The charismatic Kompany is questionable with a groin issue and was scheduled to train with his team Monday evening. Arsenal’s Thomas Vermaelen, an outside back, is out with a hurt hamstring and Kljestan’s Anderlecht teammate, Anthony Vanden Borre, will miss the rest of the World Cup with a fractured ankle.

“They have a ton of replacements who are really good,” Kljestan said. “I don’t think [Kompany] will miss the game. I think he’ll play through it. But whoever steps in, they still have a really good defense.”

Van Buyten will play in front of Courtois, perhaps alongside Nicolas Lombaerts (Zenit St. Petersburg), while Jan Vertonghen (Tottenham) and Alderweireld are likely starters on the flanks. Further up the field, the offense will run through midfielder Kevin De Bruyne (VfL Wolfsburg), rover Eden Hazard (Chelsea) and Lukaku, with multiple talented pieces around them.

WATCH: U.S. Players Look to Seize Moment in Round of 16 vs. Belgium

Kljestan said the U.S. was prepped during the group stage to face a dynamic attack like Belgium’s. Both Ghana and Germany were quick and mobile and the Americans handled themselves well with a plan that also might work on Tuesday.

“The best defense is defending from the inside out,” he said. “Make them keep the ball wide and obviously our strength is dealing with balls coming into the box. Whether Omar is playing or Geoff [Cameron] is playing, that’s their strong point – clearing and winning balls in the box.”

Belgium’s soft spot also may be on the flanks.

“If there’s a weakness with Belgium, I think it’s their outside backs,” Kljestan said, adding that U.S. fullback Fabian Johnson could be critical to the U.S. attack if he’s able to find opportunities to run at the Belgian rearguard.

“He’s been great for the U.S. and I think he’ll be a factor,” in Salvador, Kljestan said.

That weakness is relative, however. Front to back, this is as strong a team as the Americans have faced under Klinsmann. What Belgium lacks in international pedigree it makes up for in week-in, week-out seasoning at the sport’s biggest clubs, not to mention sheer talent.

“[We’ve got to] stick to our game plan. We’ve been doing well, I think, defensively. We’ve been trying to contain teams. I think our football going forward has been very good [and] we need to find a way to bottle up their key players. But they have so many of them, it’ll be difficult,” said U.S. goalkeeper Tim Howard, an Everton teammate of Lukaku and midfielder Kevin Mirallas.

“They’re known around Europe as just one of the up-and-coming, really hungry and talented teams. All of their players are playing at top clubs. Certain guys who are playing at top clubs can’t even get in [Belgium’s] starting lineup, because there’s other guys keeping them out. It’s a young, hungry, really fit, strong, team. They’ve got all the qualities of being great. So hopefully they won’t take flight quite yet.” 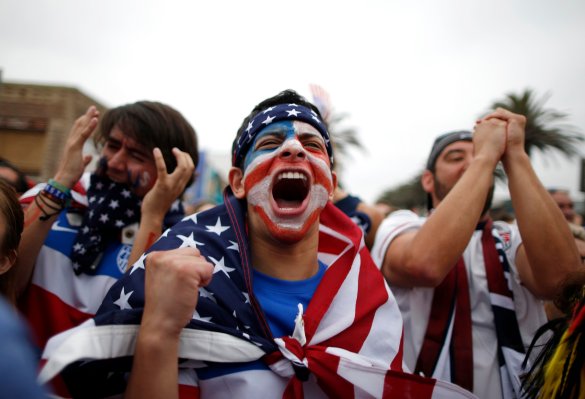 Welcome Aboard the Soccer Bandwagon, Team USA Fans
Next Up: Editor's Pick