A senior Israeli government official on Monday likened Hamas to the brutal fighters sowing chaos in Iraq and said there could be no dealing with a Palestinian government that includes the group, just hours after three Israeli teenagers believed to have been kidnapped by Hamas were found dead.

“This is just a reminder that Hamas is a cruel terrorist organization that sent 100 suicide bombers, terrorists, into Israel in the past, and has now executed three teenagers, three young boys,” said Yuval Steinitz, Israel’s Minister of Intelligence.

“I don’t see much difference between these Hamas terrorists and the people from ISIS who executed the Iraqi soldiers,” Steinitz told a group of reporters in Washington, D.C., referring to the latter group’s mass execution of hundreds of captured Iraqi security forces during its mid-June blitz into northern Iraq.

The three boys were abducted while hitchhiking on June 12. Their fate consumed Israel as a massive hunt was conducted, but their bodies were discovered in an open field near Hebron Monday.

Steinitz said that the killings reinforce Israel’s position that it could not negotiate with a Palestinian unity government combining the Palestinian Authority, which holds power in the occupied West Bank, and Hamas, which has ruled over Gaza since 2007. Despite Israeli protests, the Obama Administration continues to work with and fund the Palestinian government, led by Palestinian Authority President Mahmoud Abbas, on the grounds that it does not include any cabinet ministers affiliated with Hamas.

Though both ISIS and Hamas are Sunni radical groups, they have very different identities and agendas and ISIS employs violence on a much larger scale. But Steinitz hopes that the killing of the teenagers will “remind the world” of Hamas’ true nature, and insisted Abbas “cannot proceed with this unity government with this terrorist organization.”

U.S. officials have not publicly confirmed that Hamas is behind the abductions and killings. On Monday, State Department spokeswoman Jen Psaki wouldn’t say whether that conclusion would lead the Obama Administration to sever ties with the Palestinian government.

Steinitz also argued that Abbas himself bears responsibility for the killings, noting that the abductions took place near that Palestinian Authority–controlled town of Hebron. “Those Hamas terrorists came from Hebron and are under total control of the Palestinian Authority,” Steinitz said.

Steinitz is in Washington as part of an Israeli delegation of nine, including officials from the Mossad, Israel’s national security council and its atomic energy agency. They met Monday with senior Obama officials who are negotiating with Iran over its nuclear program, including the State Department’s Iran lead negotiator, Wendy Sherman, and Deputy Secretary of State William Burns.

The meeting was arranged on short notice, a day before the U.S. delegation leaves for a final round of talks with Iran in Vienna, Steinitz said. He reiterated Israel’s position that Iran should not be allowed to retain domestic uranium-enrichment capability or to operate a “heavy water” nuclear reactor whose fuel can be fashioned into bombs. He cited the removal of chemical weapons from Syria as a model of deal that involves total dismantlement of a weapons capability.

The current interim nuclear deal between Iran and the U.S. expires on July 20. Few observers expect the two sides to reach a comprehensive agreement by then; many expect an extension that could range from a few weeks to several more months, although even an extension will be politically complex proposition for both sides. U.S. officials have given no indication that Iran might be willing to surrender its domestic nuclear program entirely as Israel wants.

Despite all the chaos in the region, including in Iraq and Syria, he said, “we regard the Iranian nuclear issue as the most important in the Middle East — and the world.”

Steinitz was also skeptical about Iran’s potential to play a positive role in stabilizing Iraq. “It doesn’t seem to me that Iran is eager to cooperate with the U.S. or the West as regards Iraq, because Iran’s goals are different,” he said. 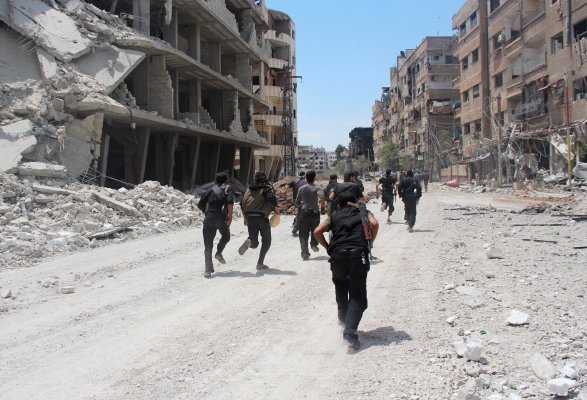 Why Obama Is Finally Getting Serious About Syria
Next Up: Editor's Pick