Can’t make the ten-hour flight to Brazil in time for the U.S. vs Belgium World Cup match on Tuesday? TIME offers the following list to help you figure out where to catch the action:

Best Place to Hang Out with a World Cup Star: Las Vegas
If you’re looking for a place to escape the sweltering Vegas heat, let the air conditioning in the Wynn Encore Resort and Casino cool you down. The sports book at the Wynn is known for its luxurious appointments. As with any good sports book, it has dozens of television screens and also two large 12-foot by 12-foot screens. More importantly, maybe you’ll catch a glimpse of Wayne Rooney, the English forward who’s reportedly vacationing there after his team was eliminated from the World Cup.

Biggest Crowd: Chicago
Looking for a place to hang out with 20,000 of your closest friends? Officials in Chicago moved the viewing party on Tuesday to the 61,500-seat Soldier Field, home to the Chicago Bears during football season, after recent parties drew unexpectedly large crowds.

Most Cultured Venue: Washington D.C.
On the calendar of the Goethe-Institut in Washington D.C., a World Cup viewing party is listed between a theatrical production of a work by Franz Kafka and an exhibition of German prints. If you catch the game here maybe you’ll absorb some of the culture as well. Just know in advance that the crowd at this organization dedicated to German culture probably wants Germany to win the whole thing.

Best Beach Scene: Redondo Beach, Calif.
Los Angeles’ hometown soccer team, the Galaxy, is hosting this gathering beachside at Veteran’s Park. After the game, you can go for a quick drive down the coast to Newport Beach, home of U.S. coach Jurgen Klinsmann.

Most Soccer-Devoted Sports Bar: New York City
Bars all over New York City are showing soccer. But if you’re looking for a place that has been dedicated to the beautiful game before everyone started jumping on the bandwagon, check out Nevada Smiths. Its website describes it as a place “Where Football is Religion.”

Best Place To Hang Out With A Big City Mayor: Boston
Marty Walsh, Boston’s new mayor, is hosting his second World Cup viewing party outside of City Hall. The New England Revolution mascot and cheerleaders will be on hand to keep people in good spirits.

And if you still can’t make it to any of these places, you can stream the games live via ESPN. Just make sure your boss doesn’t see, or try recycling Klinsmann’s note to get out of work for a bit. 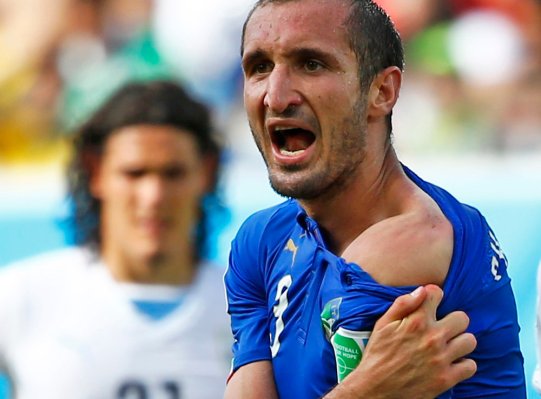 Chiellini to Suarez: No Worries About the Bite
Next Up: Editor's Pick