When Miami’s Big Three came together, they were ripe for ridicule, easy to dislike. Two championships later, and the day before this year’s intriguing NBA summer of free agency begins, the Miami stars are acting like the grown-ups in the room. The trio, as a group, seem willing to take a substantial pay cut in order to free up salary cap space for Miami, so the team can continue to add role players and win the Eastern Conference, which it has done four years in a row. Why else would Chris Bosh, and Dwayne Wade, each leave some $42 million on the table by opting out of their contracts with two years left? Odds are, they’re working in concert with LeBron James to return to Miami, at a lower annual salary.

For athletes who have made heaps of money over their careers, it might seem silly to applaud them for shaving off a million here and there. But hey, no matter how rich you are, every extra million means something: for you, your kids, your kids’ kids, your charities. LeBron James, who also opted out of his deal with two seasons to go, is going to get a maximum contract, which will pay him around $22.2 million next season. Bosh could likely recoup his $42.7 million, and then some, on the open market, but his opt-out signals a return to the Heat at some discount.

The real standout here, however, is Wade. He’s no longer the player he once was, and apparently knows it. Wade, 32, has a history of knee injuries, and is coming off a poor performance in the Finals. No team on the open market will pay him $20.2 million next year, and $21.7 million in 2015-2016. Some team could conceivably offer him that $42 million, and a little more, over the next four years. But if Wade wanted to truly maximize his earnings, he’d play out the next two years at a salary that his performance no longer justifies, then, if he’s still healthy, sign one more lucrative long-term deal, or a series of shorter deals, as his career plays out. But he’s chosen not to.

Most likely, he’ll come back to Miami at a significantly lower annual salary. Maybe Miami gives him that $42 million, plus some more, over five years, as a token of appreciation. But Wade’s annual salary cut, combined with James’ max deal and Bosh’s reduced wage, gives the Heat the best chance to add players and compete.

While Wade is sacrificing, a player known for his unselfish play, former point guard Jason Kidd, got very greedy. Kidd tried a coup in Brooklyn, the franchise that, just a year ago, took a flier on him as head coach, even though he just retired as a player and had no experience. So much for loyalty. Kidd was handed a team with the highest payroll in the league, and his performance was, well, somewhat promising. His team started out 10-21. To help show him his way around a clipboard, Kidd brought in a former coach with the Nets, Lawrence Frank, as the league’s highest-paid assistant. He then promptly demoted Frank to the league’s highest-paid writer of internal “daily reports” that the head coach almost certainly doesn’t read. Kidd also dumped Diet Coke onto the court after one of his players “accidentally” bumped into him, forcing a timeout, apparently forgetting that NBA games are televised and can easily catch him in the act. The sloppy gamesmanship cost Kidd $50,000.

To Kidd’s credit, however, the Nets turned their season around, finishing 44-38 and advancing to the second round of the playoffs for the first time in seven years (Miami bumped them out). But no way does that result justify his power play. Kidd told the Nets he also wanted full control of basketball operations, usurping general manager Billy King, a man who was instrumental in his hiring. The Nets told one of the top players in the history of their franchise to take a walk: he’s now heading to Milwaukee, where he likely will receive a better deal than the four-year, $10.5 million pact that he signed with Brooklyn. Larry Drew is out as head coach, and Kidd’s in. Kidd does not have full control of personnel in Milwaukee — yet. Milwaukee has new owners, and Kidd is chummy with one of them, billionaire hedge fund investor Marc Lasry. As compensation, the Nets get two future second round draft picks from Milwaukee, in 2015 and 2019.

The Nets are probably better off with those picks, and a new coach, than they were with Kidd. The ex-point guard might have dished out over 12,000 assists during his 19-year playing career, good for second all-time. But down in Miami, Wade’s kind of assist is more impressive than any of them. 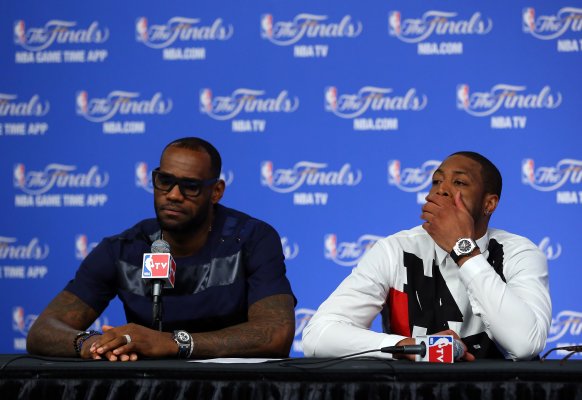 Dwyane Wade Opts Out of Heat Contract, Bosh May Be Next
Next Up: Editor's Pick