But Earnest quickly added that President Obama, who has been touring the country promoting his ability to work around Congress, plans no immediate executive actions to remedy the situation created by the Hobby Lobby ruling. “The Supreme Court was ruling on the application of a specific law that was passed by Congress,” Earnest said. “So what we’d like is for Congress to take action to pass another law that would address this problem.”

This is a notable departure in strategy for the White House that is likely to increase the visibility of the issue in an election year, while delaying the arrival of a solution for those women who will now be denied certain contraceptive coverage. All signs Monday pointed to the fact that Democrats would rather stage a political fight over the issue than quickly resolve it for the affected women. Both the Democratic Party and the White House Twitter accounts spend much of the day rallying people to outrage on social media over the decision. “It’s time that five men on the Supreme Court stop deciding what happens to women,” tweeted Senate Majority Leader Harry Reid.

Legal observers say it would not be difficult for the Obama Administration to resolve the situation unilaterally. The Department of Health and Human Services has already taken unilateral executive action to ensure that women employed by religious nonprofits get contraception coverage in cases where the employer declines to pay. “There was nothing in the statute that specifically allowed them to create the exemption for non-profit organizations so I don’t see why they couldn’t extend that to for-profit corporations,” said Timothy Jost, a law professor at Washington and Lee University and an expert on the Affordable Care Act’s regulations. “I don’t know why they couldn’t do it themselves.”

In fact, in a concurring opinion at the Supreme Court, Justice Anthony Kennedy recognized Obama’s unilateral powers as a rationale for allowing the for-profit companies to opt out of the contraception mandate in the Affordable Care Act. “In other instances the Government has allowed the same contraception coverage in issue here to be provided to employees of nonprofit religious organizations,” Kennedy wrote. “The accommodations works by requiring insurance companies to cover, without cost sharing, contraception coverage for female employees who wish it.”

But the White House has chosen to first try for a legislative fix in Congress, where the chances of success are slim at best. Republicans are mostly united in praising the Supreme Court result, all but foreclosing chances that a change in the law makes its way through the Republican-controlled House of Representatives, where most GOP lawmakers still back repeal of the Affordable Care Act.

Polls suggest that the issue could benefit Democrats in the election year. A Reuters/Ipsos poll conducted over the last month found that only 35% of the country believes that employers should be able to decide what kind of contraceptives their health plan provides for employees based on religious beliefs. By contrast, 53% of the country opposed giving employers that power.

The White House, meanwhile, is leaving open the option for unilateral executive action, but only once Congress fails. “We’ll consider whether or not there is a range of other options that may be available that don’t require legislative action,” Earnest said, declining to put a timeframe on the review. 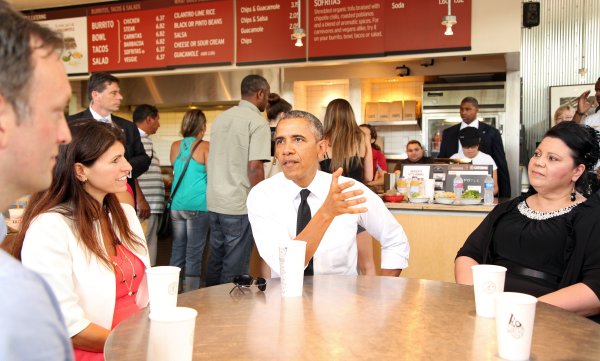 Obama Wants Federal Workers to Have More Family Time
Next Up: Editor's Pick