Kenya is under attack from within. Over the past two weeks, suspected al-Shabab militants have massacred 60 people in a Kenyan coastal town, marking the country’s worst terrorist violence since the Westgate mall siege that left at least 67 people dead last year. Eyewitnesses said the attackers stormed the town of Mpeketoni in minivans flying the black al-Shabab flag, shouting “Allahu Akbar” (God is the greatest). Speaking in Somali and Swahili, an official language in Kenya, the gunmen asked if the residents were Muslim. If not, they fired, according to reports.

The attacks underscore the increasing homegrown al-Shabab threat in Kenya, once seen as a stable ally of the United States in East Africa, a popular destination for American tourists to go on safari and sunbathe on the beach of the Indian Ocean. Yet Kenya, with its porous borders, political corruption, and high density of Western targets is now being described as a breeding ground for al-Shabab, a terrorist group with origins in Somalia and links to al-Qaeda, that is actively targeting U.S. citizens and businesses in Kenya and possibly abroad. The oppressive Kenyan response is not helping. Today, critics say Kenya’s latest anti-terror campaign, described by human rights groups as indiscriminate persecution of Somali refugees and Kenyan Muslims, is backfiring, with the anti-Muslim sentiment being used by al-Shabab to whip up support inside the country.

“Probably the greatest misunderstanding of al-Shabab is that people underestimate the degree that al-Shabab has become a Kenyan problem,” says Matt Bryden, the head of Sahan Research, a Nairobi-based Horn of Africa think-tank. al-Hijra, a Kenyan associate of al-Shabab, has mobilized its Kenyan followers through extremist Muslim preachers, targeting youth in mosques and through jihad propaganda; online videos featuring the organization’s leaders and an online magazine, Gaidi Mtaani. Al-Hijra members, estimated by Bryden to number over 700, have battlefield training, having crossed the border to fight in Somalia. Meanwhile, their charismatic leader, Kenyan Ahmed Iman Ali, is at large. “The tempo of attacks and the scale of attacks suggest that al-Shabab and al-Hijra have taken the initiative,” he says, “what observers are looking for is a sign that the Kenyan government has taken the initiative back.”

That sign has not come. The latest terrorist attacks were met with confusion. After first declaring al-Shabab responsible for the massacre, the Kenyan government later blamed the violence on longstanding ethnic devisions, putting the attack squarely on the opposition’s soldiers. The claim was met with skepticism.

Usually, Kenyan leaders cast terrorism as a foreign threat, a Somali problem. But in response to the quickening tempo of al-Shabab bombings, the Kenyan government announced “Operation Usalama Watch,” a crackdown on Somali immigrants and refugees in Kenya. Under the campaign, which means “Operation Safety Watch” in Swahili, over 4,000 Somalis and Muslim Kenyans were detained at the MOI International Sports Center in Kasarani, a suburb of Nairobi. The sports grounds were used as a mass jail, before people were either cleared and released by police, sent to impoverished refugee camps, or deported back to war-torn Somalia. In May, Linda Thomas-Greenfield, US Assistant Secretary of State, Bureau of African Affairs, expressed “strong concerns” about the operation, questioning its rectitude after Human Rights Watch reported people dying during brutal round-ups, children becoming estranged from their parents, and police officers beating people and soliciting hundred-dollar bribes. “It’s a lazy, knee jerk response to a deeply serious problem of violent extremism that Kenyans are facing,” says Jonathan Horowitz, a legal officer at the Open Society Justice Initiative, a New York-based non-profit. “Abuses—extrajudicial killings, torture, disappearances—are propaganda and recruitment tools.”

For the United States, the potential radicalization of Kenyan youth is a worst-case scenario. “You’ve just rounded up a group of men, and you’ve set them in a place to get up to either mischief or find another avenue, which could be al-Shabab,” says Lauren Ploch Blanchard, African affairs specialist at the Congressional Research Service in Washington. Huge resources have been spent to prevent Kenyan radicalization. Kenya is the fourth largest recipient of U.S. aid for civilian counterterrorism operations, with $43 million earmarked over the past four years, and an additional $117 million for counterterrorism and border security programs. “Some of this is difficult and frustrating, yet we need to be there to help them so that we don’t have to come in and do it all ourselves,” says U.S. Congressman Mac Thornberry, speaking from his office in Washington. “There’s been a greater effort to gather information about what al-Shabab is doing, what they plan to do,” said Thornberry, who sits on the House Armed Services Committee, “but the primary responsibility within Kenya is obviously up to the Kenyan government.”

Beginning in April, the Kenyan government’s anti-terror campaign saw 6,000 Kenyan police descend on Eastleigh, a bustling, gritty suburb of Nairobi, home to thousands of Somali refugees and Kenyan Muslims. Visiting Eastleigh, I met Ahmed Mohamed, the secretary general of the Eastleigh Business Community, at the Nomad Palace Hotel, a hotel in luxury Mogadishu style with velvet sofas studded with fake diamonds and coffee cups decorated with golden camels. Over a lemon tea with honey, Mohamed described Operation Usalama Watch as a nightmare. “At first they came in and started knocking down doors and flushing out people, it was really, really terrible,” says the 36-year-old, “they were rounding up everyone and taking them to Kasarani stadium, which was later called a concentration camp.”

Today the controversial operation is still going. At the Kasarani stadium, where a billboard proudly displays a champion long distance runner with the slogan “Home of Heroes,” troops in fatigues and maroon berets patrol the grounds with guns slung over their shoulder. Four men were walking from the stadium, just released after four days inside. “I’ve never understood the objective of these police operations, was it to take out illegal immigrants or was it to fight terrorism? Because if it was to fight terrorism they’re going about it the wrong way,” says Mohamed, a Kenyan Muslim. “When you knock down a door at 2 am in the morning, and wake up the elderly grandmother, with her children, what do you expect a teenager to think at that very moment? It will only create animosity in him.”

To the young, al-Shabab promises not only revenge, but fortune and adventure. “Al-Shabab, they even recruit our youth, they tell them we’ll pay you money,” says Benson Sekwa, a burly 38-year-old taxi driver in Nairobi who says a 22-year-old friend of his was recruited by the group. Sekwa’s friend went to Somalia to train and was arrested upon his return to Kenya. “You could tell him don’t do that, but he can’t hear you,” says Sekwa, “he’s after the money.”

As long as the Kenyan government is heavy-handed, observers say al-Shabab and al-Hijra will continue to capitalize on the anti-Muslim sentiment to rally Kenyan youngsters to wage jihad. “The worst case scenario is if the government continues to rely on the hammer, on the security sector, exclusively, to deal with the threat,” says Bryden. “For the moment, we haven’t seen a sign of the government using soft power as a way of undermining jihadist groups,” he says. “If they rely solely on military policing then I’m afraid the threat will endure.” 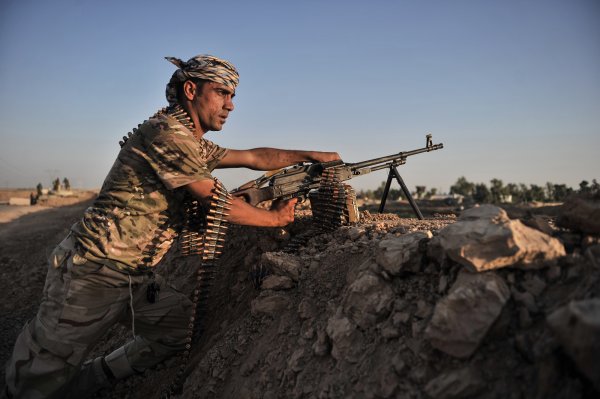 Kurds to Vote on Independence From Iraq
Next Up: Editor's Pick