5 Things Women Need to Know About the Hobby Lobby Ruling

On Monday, the Supreme Court ruled in a 5-4 decision that the government cannot require certain employers to provide insurance coverage for birth control if they conflict with the employer’s religious beliefs. The ruling on Burwell v. Hobby Lobby Stores, Inc. is not only a blow to the Affordable Care Act but also, critics argue, to women’s rights.

Here’s what women need to know:

1. If you work at certain types of for-profit companies, they no longer have to cover the cost of any contraception that they say violates their religious beliefs

The Affordable Care Act (a.k.a. Obamacare) requires most health insurance plans to cover birth control without cost-sharing. Without healthcare coverage, the pill can cost about $25 a month and an IUD (intrauterine device) can cost up to $900 (though it’s inserted once and lasts up to 12 years).

Before the ruling, houses of worship were already exempt from the birth control insurance mandate. Non-profit organizations with religious affiliations, like Catholic colleges and hospitals, have to inform the insurer if they object to contraceptives, and the insurer is then responsible for figuring out a way to guarantee contraceptive coverage for the workers without the company using its premiums to pay for it.

The privately-owned corporation Hobby Lobby, an Oklahoma-based craft store with self-described Christian values, argued that they too should not have to cover certain emergency contraception because of their religious beliefs. The company objected to paying for emergency contraception including Plan B, Ella—both commonly known as the morning after pill—plus two types of IUDs. Hobby Lobby said they believe these types of birth control amount to abortion. The company did not object to covering other types of contraception, including birth control pills.

The Supreme Court ruled in favor of Hobby Lobby, but the ruling applies only to companies considered “closely held.” According to the IRS, a company is “closely held” if five or fewer people own more than half the corporation. Closely held firms make up over 90% of all American businesses, and about 52% of the American workforce works for a closely held corporation, according to studies from Columbia University and New York University. The Affordable Care Act, however, only requires employers with 50 or more employees to provide health insurance to workers, so many “closely held” firms are already exempt.

Justice Samuel Alito suggested in his ruling that the Health and Human Services (HHS) department could extend the accommodations that they have in place for religious non-profits to these for-profit companies so the insurer would provide birth control without charging the company. However, both religious groups and women’s rights groups think this would be insufficient. Some religious non-profits have alleged that these accommodations still infringe on their religious beliefs and are suing the federal government. And advocates at the Women’s National Law Center have said companies should be required to provide contraception as a basic healthcare need. The Obama administration may need to come up with a an alternative way to provide coverage, but it’s unclear what those options would be or how difficult they would be for consumers to access.

Justice Ruth Bader Ginsburg wrote the dissenting opinion and was joined by Justice Sonia Sotomayor, Justice Elena Kagan and Justice Stephen Breyer (the only male justice who dissented). “The exemption sought by Hobby Lobby and Conestoga would…deny legions of women who do not hold their employers’ beliefs access to contraceptive coverage,” Ginsburg wrote. “Religious organizations exist to foster the interests of persons subscribing to the same religious faith. Not so of for-profit corporations. Workers who sustain the operations of those corporations commonly are not drawn from one religious community,” she continued.

Ginsburg notes that an IUD without coverage costs a month’s pay for minimum-wage workers. And critics of the ruling say that because a federal work around hasn’t been developed yet, many of the women who currently work for places like Hobby Lobby have lost easy access to key family planning options and the most most effective type of birth control. Even after the gap is filled, it still may be cumbersome to acquire birth control. While some women are able to choose their place of employment taking health care into consideration, because of geography and economic restrictions, that’s not possible for all women.

3. The ruling may depress use of IUDs at some privately held corporations that deem it a form of emergency contraception

Today’s decision, which gives certain companies the option of not covering the IUD among other types of contraception, arguably undermines gains made in IUD usage. The IUD can also be used as emergency contraception if it is inserted five days after intercourse, hence the Hobby Lobby’s objection to it and not birth control pills.

This isn’t the way most women use the IUD: many gynecologists will only schedule an appointment for IUD insertion until after a woman gets her period that month so as to ensure she’s not pregnant. Some will even perform an ultrasound. There are no statistics on how many women use the IUD as an emergency contraceptive method instead of alternate methods like the “morning after” pills, but James Trussell—a Princeton Professor who has done extensive research on the topic—told TIME’s Sarah Begley, “I would say that the number [of women] who get IUDs as emergency contraception is miniscule.”

The fallout from today’s ruling could be that some women who work companies that refuse to cover the IUD may be discouraged from using this effective birth control method by additional costs they may incur or the complications of finding supplemental insurance.

4. Women’s rights groups are angry because they see the ruling as a loss of autonomy for women

Some women’s rights advocates have taken the argument even further than Ginsburg did. Up until this point the Religious Freedom Restoration Act (RFRA) has been interpreted as a protection for individuals’ religious practices—not those of corporations. The Supreme Court just said that these protections also extend to for-profit companies, but didn’t protect a woman’s right to choose her method of birth control. Thus, many critics argue, the Supreme Court decided that corporations are people, but women are not. Women’s rights groups say restricting insurance coverage for some types of contraception, or making coverage more difficult to obtain, undermines access to birth control in general and point to studies that have shown that offering greater access to contraception—rather than restricting it—leads to fewer unintended pregnancies and thus reduces the number of abortions by 75 percent annually.

5. Under the ruling, some corporations could attempt to refuse coverage for other, non-contraceptive medications and procedures citing their religious beliefs

As Ginsburg writes in her dissent, “Would the exemption…extend to employers with religiously grounded objections to blood transfusions (Jehovah’s Witnesses); antidepressants (Scientologists); medications derived from pigs, including anesthesia, intravenous fluids, and pills coated with gelatin (certain Muslims, Jews, and Hindus); and vaccinations?”

In the majority opinion written by Justice Alito, he specifies that the ruling applies only to the contraceptive mandate, and states that it should not be understood to include to other insurance mandates, like those for blood transfusions or vaccinations. But Ginsburg notes that even if the Alito exclusion holds, there are other issues: “Approving some religious claims while deeming others unworthy of accommodation could be ‘perceived as favoring one religion over another,’ the very risk the [Constitution’s] Establishment Clause was designed to preclude,” said Ginsburg. 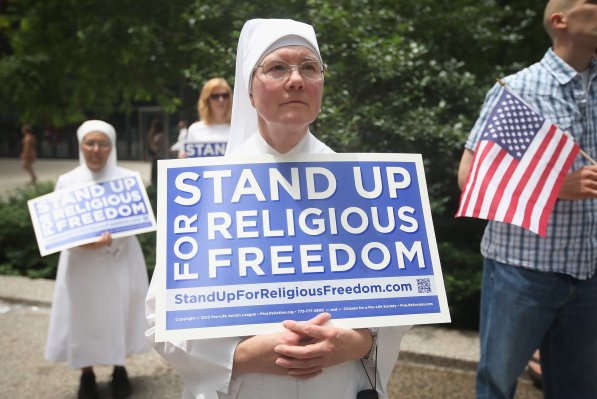 Hobby Lobby Ruling Is a Win for Separation of Church and State
Next Up: Editor's Pick