On Sunday night, Hobby Lobby was simply a craft store. On Monday morning, it became the champion of religious liberty for conservative faith groups across the country.

The Supreme Court of the United States ruled in a 5-4 split decision on June 30 that closely-held corporations can hold religious views under federal law, meaning that religious for-profit companies can refuse to pay for the employee contraceptive coverage required by President Barack Obama’s health care reform law.

Conservative Christian voices immediately praised the ruling and offered their prayers of thanksgiving. Tony Perkins, president of the Family Research Council, called the ruling, “one of the most significant victories for religious freedom in our generation.” Rick Santorum, former U.S. Senator and Republican presidential candidate, described it as “a tremendous victory for our freedom of conscience.” Russell Moore, president of the Ethics and Religious Liberty Commission of the Southern Baptist Convention, tweeted “Hallejulah” within seconds, and then “Gave proof through the night that our First Amendment’s still there.” Soon after, Moore posted on his blog, “This is as close as a Southern Baptist gets to dancing in the streets for joy.”

A supporting chorus of the faithful around the country quickly added to the rejoicing. The U.S. Conference of Catholic Bishops called Monday a “great day for the religious freedom of family businesses.” George Wood, general superintendent of the Assemblies of God church, commended the court “for recognizing that individuals do not surrender their religious freedom rights when they incorporate as a closely held, for profit business.” Brian Fisher, president of Online for Life, stated, “No person or entity should be forced to provide baby-killing drugs to their employees.” Samuel Rodriguez, president of the National Hispanic Christian Leadership Conference, explained that the decision does not stop here: “I do believe that while this outcome validates this fundamental right, the many threats in both culture and society make religious liberty the quintessential civil rights issue of the 21st century.”

It would be a mistake, however, to believe that all religious groups are pleased with Monday’s ruling. Many religious leaders, Christian and non-Christian, see the decision as a setback for both the freedom of faithful practice and access to health care for which they have advocated for years. “The Court has privileged bosses and their corporations–who now are allowed to exercise religious belief, even though a corporation can’t sit in a pew–over women,” said Rev. Dr. Althea Smith-Withers, who chairs the Religious Coalition for Reproductive Choice, whose members include the American Jewish Committee, the Episcopal Church, and the United Church of Christ. “Contraception is a moral good, a fact supported by the various denominations and organizations that make up our coalition. It’s a shame that it may be out of reach for the women who need it the most.”

Union Theological Seminary president Serene Jones called the decision a loss for Christians who desire to be faithful. “As a Christian, I believe that God creates human beings individually, and that the mark of our individual blessedness before God is our souls,” she said in a statement. “I am horrified by the thought that the owners of Hobby Lobby as Christians think their corporation has a soul, and I’m even more appalled that the Supreme Court agrees.”

Sister Simone Campbell, executive director of NETWORK, a national Catholic social justice lobby, is concerned that corporate owners now have more faith and health-related protections than their employees. “It is fairly stunning that the Supreme Court in today’s Hobby Lobby ruling held that a corporation’s owners can extend their religious preferences to the corporation’s employees regardless of their employees’ religious views,” Campbell says. “It raises the serious concern about employees being able to get needed services.”

The divide is a reminder that conservative religious groups are celebrating a broader victory. Yes, they transformed a dispute about health care coverage requirements into a symbolic case about religious freedom. But they have had few big culture war wins in recent years, especially as public opinion shifts in favor of marriage equality. The Hobby Lobby ruling—handed down on the last day of LGBT Pride month—is a bright spot for conservative Christians who feel besieged by cultural values they do not share.

The case’s broader religious freedom implications, however, may be more limited than many victors might hope. The decision is based on a 1993 law called the Religious Freedom Restoration Act, not the First Amendment more broadly. Justice Samuel Alito, who wrote the majority opinion, was careful to clarify the ruling is restrained in scope. “This decision concerns only the contraceptive mandate and should not be understood to hold that all insurance-coverage mandates, e.g. for vaccinations or blood transfusions, must necessarily fall if they conflict with an employer’s religious beliefs,” he wrote in the ruling. “Nor does it provide a shield for employers who might cloak illegal discrimination as a religious practice.” 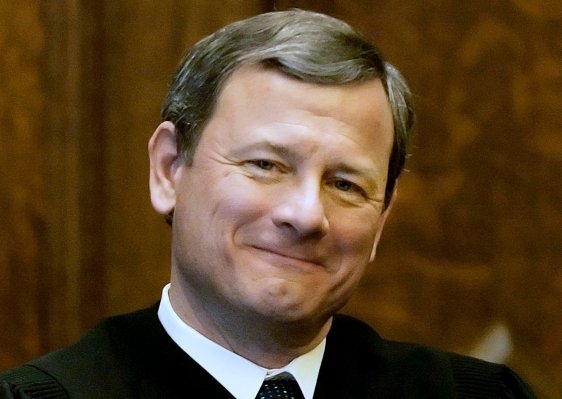 John Roberts Bridges the Gap
Next Up: Editor's Pick