American Corporations Are Powerful Enough Without a Conscience

The U.S. Supreme Court is shown on June 25, 2014 in Washington.
Win McNamee—Getty Images
By Rana Foroohar

Corporations have more economic power than they’ve ever had in this country as measured by their share of overall U.S. GDP. Now, thanks to a new Supreme Court ruling, they have more religious freedom too. In the closely watched Sebelius versus Hobby Lobby case, the court decided in favor of Hobby Lobby, a craft retail store chain run by a family of Pentecostals who believe that offering up certain birth control options via employee insurance, which had been mandated under the Affordable Care Act, conflicted with their religious beliefs. The courts thought they had a point–and the ruling says that such “closely held” family companies are no longer required to provide contraception for workers, similar to religious non-profits, some of which already have the same exception.

The upshot? Companies can now officially have a conscience. Just as the Citizen’s United case allowed companies the rights of individuals when it came to political donations, this case is setting a big precedent for corporations to be treated as individuals when it comes to religious freedom.

There are all sorts of potential business implications. First and most immediately, you could see a difference in access to paid contraception for women who work in big publicly held firms versus privately held and/or family owned ones. That’s no small thing, given that private firms drive 50 percent of GDP and about 65 percent of new job creation in this country. It could also create a further divide in access to contraception between rich and poor women. The former tend to work in greater numbers for large, publicly held companies. The latter are more likely to be laboring in small, local firms–the town hairdresser, a restaurant, or a doctor’s office–than in bigger firms like Hobby Lobby.

The ruling could also open the door to all sorts of other challenges to workplace legislations based on notions of religious freedom. Take the Employment Non-Discrimination Act, for example, that would include sexual orientation amongst the protected characteristics in workplace discrimination suits. Could firms like Hobby Lobby challenge that, too?

Finally, and perhaps most profoundly, this ruling gives more power (economic and personal) to U.S. corporations, at the expense of individual human labor. That’s a shift that’s been happening for decades now (and interestingly, was forwarded by another anti-union ruling that came down from the Court today). And to me, it’s worrisome. At a time when corporations have more economic power than ever, pay the lowest share of taxes as a percentage of the total take in history, and are creating fewer jobs than in the past, do they really need more special treatment that compromises a public good (in this case, equal access to healthcare) and puts more of a burden on individuals? I don’t think so. 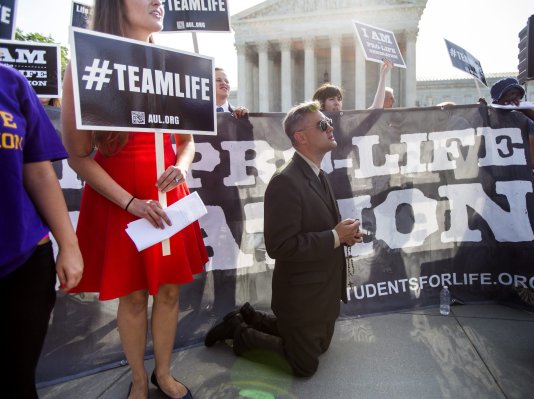 Court Sides With Hobby Lobby
Next Up: Editor's Pick