Pro-life supporter Michael Hichborn with American Life League prays outside the US Supreme Court where the nine justices are expected to issue their ruling on the Hobby Lobby case, which challenges the Affordable Care ActÕs mandate that employee health plans include pregnancy preventive services, in Washington on June 30, 2014.
Jim Lo Scalzo—EPA
By Michael Scherer

Private corporations that are so-called “closely held” have a right to religious freedom under U.S. law just like individual citizens, the Supreme Court ruled Monday, in a divided opinion that will allow religious for-profit companies to refuse to pay for the employee contraceptive coverage required by President Barack Obama’s health care reform law.

The 5 to 4 decision, written by Justice Samuel Alito, found that the contraception mandate in the Affordable Care Act violates a 1993 law called the Religious Freedom Restoration Act (RCPA) in the case of two for-profit businesses, the arts and crafts chain Hobby Lobby of Oklahoma City and the cabinetry maker Conestoga Wood Specialties of Pennsylvania. The owners of both stores argued that certain forms of covered contraception, including Plan B, ella and intrauterine devices, had the potential to work after conception, violating their religious values. The ruling applies to “closely held” corporations that are controlled by just a few people.

Congress passed the RCPA in 1993 to mandate that the government use the “least restrictive means” of furthering its interests in situations that infringed on the religious freedoms. Alito ruled that the contraception mandate did not meet that test, which he said must be applied even in case of objections by closely held corporations. “Any suggestion that for-profit corporations are incapable of exercising religion because their purpose is simply to make money flies in the face of modern corporate law,” Alito wrote in his opinion.

But Alito also limited the scope of his opinion in response to concerns from liberal justices. “This decision concerns only the contraceptive mandate and should not be understood to hold that all insurance-coverage mandates, e.g. for vaccinations or blood transfusions, must necessarily fall if they conflict with an employer’s religious beliefs,” Alito wrote. “Nor does it provide a shield for employers who might cloak illegal discrimination as a religious practice.” Alito also wrote that the case may not apply directly to large publicly traded companies, where the beliefs of the shareholders are more difficult to discern.

The cases asked the court to weigh the rights of closely held for-profit corporations to follow the religious beliefs of their owners against the rights of employees to get health insurance coverage for a broad range of contraception.

Political reaction to the ruling was swift. White House Press Secretary Josh Earnest said that the decision “jeopardizes the health of women” employed by affected companies.

“The Supreme Court ruled today that some bosses can now withhold contraceptive care from their employees’ health coverage based on their own religious views that their employees may not even share,” he said. “President Obama believes that women should make personal health care decisions for themselves rather than their bosses deciding for them.”

Democratic National Committee chairwoman Debbie Wasserman Shultz described the decision as an assault on women’s access to health care. “This decision takes money out of the pockets of women and their families and allows for-profit employers to deny access to certain health care benefits based on their personal beliefs,” she said in a statement.

Republican National Committee chairman Reince Priebus countered that the decision was a victory for religious freedom. “We’re grateful the Court ruled on the side of liberty,” he said in a statement. “The central issue of this case was whether the federal government can coerce Americans to violate their deeply held religious beliefs.”

The Obama Administration has previously given waivers on the contraception mandate to certain non-profit religious organizations, like churches and mosques. Other non-profits with religious affiliations, like the University of Notre Dame, are pursuing separate lawsuits against the mandate, which could reach the Supreme Court in the next term.

In a concurring opinion, Justice Kennedy wrote that employees of Hobby Lobby and Conestoga Wood Specialties may be able to still get full contraceptive coverage with a government workaround that has been offered to employees of religious non-profits. “The accommodation works by requiring insurance companies to cover, without cost sharing, contraception coverage for female employees who wish it,” Kennedy wrote.

The dissent in the case, led by Justice Ruth Bader Ginsburg, decried the majority ruling, calling it “a decision of startling breadth” that would allow commercial enterprises to “opt out of any law (saving only tax laws) they judge incompatible with their sincerely held religious beliefs.”

Joined by Justices Elena Kagan, Stephen Breyer and Sonia Sotomayor, Ginsburg went on to argue that corporations, even those controlled by a single family, do not have free exercise rights for religion. “[T]he exercise of religion is characteristic of natural persons,” she wrote, “not artificial legal entities.”

Most Popular on TIME
1
Meet TIME's First-Ever Kid of the Year
2
Georgia Election Official Calls Out Trump
3
Who Should Be TIME’s Person of the Year for 2020? Vote Now 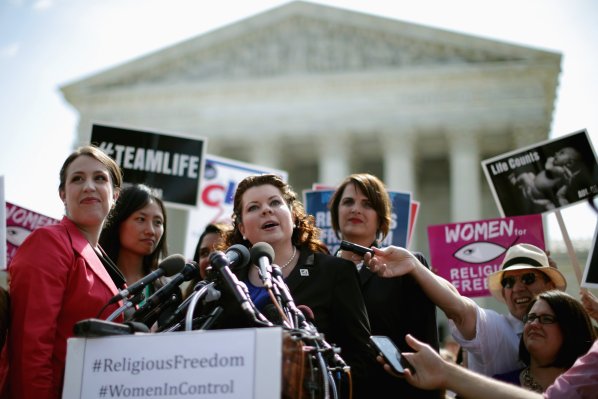