As Sony's Walkman Turns 35, a Look Back at Its Inception

Imagine you’re the co-founder of a global corporation, a Japanese electronics industry behemoth with virtually limitless resources at your disposal. But you live on planes, you like to listen to classical music during lengthy trans-Pacific trips, and you’re tired of schlepping your company’s bleeding edge bulky monaural-only player around.

So, because you can, you instruct your research and development wing to build a smaller, more portable version for your personal use. The year is 1978.

From that self-serving request — made over three decades ago by frustrated Sony co-chairman Masaru Ibuka and serviced by Sony’s tape recorder division with a device Ibuka liked so much he pushed to bring it to market — poured the world’s first portable audio empire. Sony’s Walkman, which turns 35 years old on July 1, 2014, went on to sell hundreds of millions of magnetic tape-reeling units, decades before Apple’s iPod ushered in the digital, solid state audio playback revolution.

Portable audio devices weren’t new when Sony’s first Walkman, the unsexy-sounding model “TPS-L2,” arrived on July 1, 1979. The world’s first portable audio player appeared two-and-a-half decades earlier in 1954: the Regency TR-1 — it had a more logical-looking model number, the TR being short for “transistor,” itself technology that was turning heads in the mid-1950s. It cost $49.95 when it launched, or $442 in today’s dollars. It played back radio audio, of course, weighed 12 ounces (with its 22.5-volt battery, which lasted 20 hours), was about the size of an inch-thick stack of index cards and didn’t fit in your pocket. But though Regency only sold about 150,000 TR-1 units, it’s recognized as the first device that got people out and listening to music on the go.

Magnetic tape appeared earlier still, back in 1930, courtesy German chemical engineering company BASF, though at this point the tape was wrapped around giant reels and hung on machines that were anything but portable (AEG showed off the first reel-to-reel commercial recorder in 1935, dubbed the “Magnetophon”). It took half a century — a period that witnessed the emergence of everything from 8-track players in the 1960s to semi-portable cassette-wielding “boombox” stereos in the 1970s — before Sony began toying with the notion of music-focused tape players small enough to fit in the palm of your hand.

Even then, one of Sony’s first attempts at a high-end “portable” stereo music player was hardly mainstream: the TC-D5, released in 1978, was heavy and cost a fortune. It was the bulky TC-D5 that Sony’s Ibuka was hauling back and forth on all those lengthy business flights, and which prompted him in 1978 to ask Norio Ohga, Sony’s section manager of its tape recorder division, to have a go at creating a stereo version of Sony’s Pressman — a relatively small, monaural tape recorder Sony had begun selling in 1977 and targeted at members of the press.

Ohga took Ibuka’s request to Kozo Ohsone, the tape recorder business division’s general manager, who immediately began fiddling with a modified Pressman that wouldn’t record audio but instead offered stereo playback. The resulting device so pleased Ibuka after he tried it on a business trip that he went to then-Sony chairman Akio Morita, saying “Try this. Don’t you think a stereo cassette player that you can listen to while walking around is a good idea?”

Morita did, and he thought the world would, too, immediately instructing his engineering team to begin work on a product “that will satisfy those young people who want to listen to music all day.” The device had to be ready by summer (to appeal to students on vacation) and ship at a price comparable to the Pressman’s.

After just four months in development, the device was ready. But what to call it? Sony’s Ibuka wanted “Walkman,” in accord with the company’s Pressman, but the company wasn’t so sure the name was right, at first marketing the device as the “Soundabout” in the U.S. (where it debuted slightly later in June of 1980) and with completely different names in other countries. Sony eventually settled on Ibuka’s function-angled moniker — the underlying principle was musical ambulation, after all — and so the Walkman was born, though it wasn’t an instant hit.

Sony produced 30,000 units at the device’s Japanese launch in 1979 — the TPS-L2 ran on two AA batteries and required headphones, since it had no speaker — and priced it at $150 (just under $500 in today’s dollars), but only sold a few thousand by the close of July. It took Sony representatives walking the streets of Tokyo with test units in hand, working the crowds and letting them try the Walkman for themselves, to generate interest that devoured all of Sony’s product stock by August’s close. And to address critics of the TPS-L2, who balked at the notion of its playback-only limitation, Sony quickly followed with a version of the Walkman it dubbed the TCS-300 that added the option to record as well.

The rest of the story you know: While cassette and later disc-based mobile media players have long since been supplanted by Apple’s iPod and the MP3-focused post-iPod listening era, the Walkman, through all its many feature iterations and media shifts to alternative formats like the MiniDisc (sold under the Walkman brand), has gone on to sell nearly 400 million units. By contrast, you have to add up all of Sony’s PlayStation game consoles and handhelds sold to date (the first PlayStation went on sale in late 1994) to slide past that figure.

This is somewhat less well-known — you’ll find this nowhere in Sony’s elaborate corporate self-history — but Sony got into a bit of legal trouble with the Walkman that it didn’t fully get out of until roughly a decade ago. That’s because of one Andreas Pavel, a German-Brazilian inventor who created a device way back in 1972 that he dubbed the “Stereobelt” (because you wore it like a belt). Pavel’s device was enough like the Walkman, and his patents filed well enough in advance, that Sony eventually had to pay him royalties on the Walkman’s sales, but then it only did so in certain countries and for select models.

But Pavel, described in this 2005 New York Times piece as “more interested in ideas and the arts than in commerce, cosmopolitan by nature and upbringing,” also wanted recognition for being the inventor of the “portable stereo,” so he pursued Sony, culminating in threats in the early 2000s to sue the company in every country Pavel had filed a patent. In 2003, Sony finally relented, settling out of court for an undisclosed amount, and Pavel won the right, once and for all, to call himself the inventor of the personal portable stereo player.

My own memories of the Walkman’s arrival are filtered through the haze of a pre-Internet-chronicled childhood. I was nine-going-on-10 when the Walkman debuted stateside, living in a remote Nebraska town with a population in the low thousands. (Alexander Payne exaggerates the details of small-town Nebraska life in his eponymous film, but gets the sedate pace and disconnected tone precisely right.) In 1980, my parents had a combo 8-track stereo and record player that looked like a sofa table and took at least two people to move. It had a giant lid to hide all its knobs and levers — a monument to technological unsightliness encapsulated by elegant woodwork. It was state-of-the-art where I lived, and my interface to music as the world was transitioning to mobile.

When I got my first Walkman — I don’t recall the exact year, though I’m sure it wasn’t the first model — it was a revelation, a means of listening to music when and where I wanted to, of breaking up weekend family car trips (every car trip’s forever when you’re a kid and an hour in any direction from a major city), of liberating the music I was listening to at the time (a great many John Williams film soundtracks courtesy my uncle, who’d make me cassette copies of his own recordings) from the confines of living rooms, or the aural and control compromises of automobile stereos.

I’m not sure I cared about or even fully understood Sony’s role in portable stereo-dom growing up in the 1980s, and Sony or no, a device like the Walkman (just as the iPod after it) was probably inevitable. But credit where credit’s due: Sony’s Walkman is emblematic of what it meant to be a music connoisseur during the cassette tape’s glory days, where keeping the music in transition from your living room to your car stereo to on your person after driving to a park for a stroll or jog was as simple as hitting a button (EJECT), slipping the tiny tape-spooled piece of plastic from one magnetic door to another, and pushing PLAY. 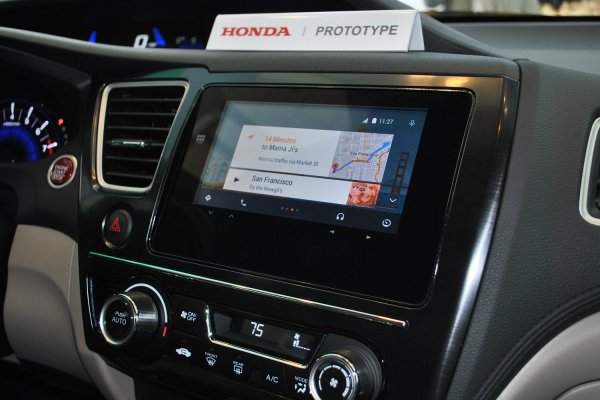 How Google and Apple Plan to Invade Your Next Car
Next Up: Editor's Pick