Gay-pride festivities across the country on Sunday are honoring the 45th anniversary of the Stonewall riots, the demonstrations that kickstarted the modern-day LGBT movement in 1969.

In 1969, a violent confrontation between raiding police and the patrons of the Stonewall Inn bar ignited a number of protests in New York City and helped galvanize the formation of some LGBT activist groups. And over four decades later, millions across the U.S. will join in pride events.

In New York City, where organizers are live-streaming the day’s events online, one of the city’s iconic landmarks, the Empire State Building, has turned on its rainbow lights to mark the weekend.

San Francisco Pride, which last year drew 1.8 million people to the weekend-long celebration, will celebrate its 44th year with an event honoring former military-intelligence analyst Chelsea Manning, who came out as transgender last year, as an honorary grand marshal.

This year’s pride events take place in what has been a banner year for transgender visibility in the media. Orange Is the New Black actress and TIME cover star Laverne Cox told a crowd at Logo’s Trailblazer Awards this week that it was important to acknowledge and remember the contributions of transgender people, like Sylvia Rivera, to early activism.

“Sylvia Rivera, a true trailblazer, was present at the Stonewall rebellion,” Cox said, according to People. “She, as a trans person, a street queen, a hustler, warned us about becoming a movement that was only for white, middle-class people. And 45 years later, the most marginalized of our communities are still struggling.”

The events also mark roughly a year since the U.S. Supreme Court struck down the Defense of Marriage Act, which prohibited federal recognition of same-sex marriages. Seven states have since legalized marriage equality, and now a total of 19 states and Washington allow same-sex marriages. A federal appeals court ruled last week for the first time that states must allow gay people to marry. 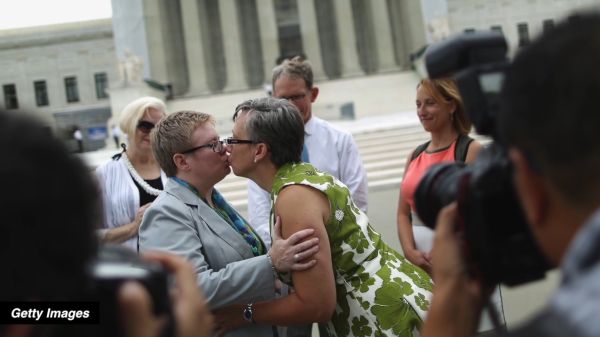 Look Back on the Historic DOMA Ruling One Year Later
Next Up: Editor's Pick