In this photo illustration, Aereo.com, a web service that provides television shows online, is shown on an iPad Mini, on April 22, 2014 in New York City.
Andrew Burton&mdash;Getty Images
By Alex Fitzpatrick

Chet Kanojia, CEO of the streaming television service Aereo, told his customers the bad news in an email Saturday morning: After the Supreme Court decided this week his company’s business methods violate copyright law, Aereo has decided to shut down. Kanojia insists that Aereo’s pressing “pause,” not “off,” but it’s unlikely the service will return in any recognizable form.

That Aereo is unlikely to come back from the grave is a simple matter of math. The Supreme Court ruled that Aereo, which streamed broadcast television to subscribers for about $8/month, was operating illegally because it didn’t pay so-called retransmission fees to broadcasters–something cable and satellite companies are required by law to do.

Aereo could return to the straight and narrow by working out a deal and ponying out the fees that the broadcasters–who originally brought the suit against Aereo in 2012–demand from cable and satellite companies. Those fees, however, are incredibly expensive. Cable companies can afford to pay them because they’re charging viewers plenty for their service–the average cable bill is now over $64 a month, per the Federal Communications Commission. Aereo can’t swing those fees by charging customers only a few dollars a month.

The most obvious survival path for Aereo would be to pass those fees onto its customers by increasing its subscription rates. But here’s the thing: The broadcast content that Aereo provides is free to anyone who wants to set up their own (cheap!) antenna on their TV or home.

Why? A big part of the government’s job in tech policy is regulating the invisible spectrum on which our wireless gadgets rely–cellphones, radios, broadcast television, Wi-Fi, Bluetooth, they all rely on spectrum to work. Back in the day, the government licensed broadcasters their spectrum–a limited and thus valuable resource–on the cheap, provided they meet certain conditions. Among those requirements was that the broadcasters’ over-the-air signals remain free for anyone within range to access with an antenna.

While most of Aereo’s customers might have seen $8/month as a reasonable fee to pay for the convenience of watching broadcast content on their laptop, smartphone or tablet, it’s unlikely they’ll pay much more for content that’s really free for them anyway.

So, for Aereo, it’s lights-off for now while they figure out what to do next — perhaps shift into cloud storage, or sell itself to a broadcaster, even. If it ever returns, though, it’s not likely it’ll look anything like what it does now.

Watch the above video for more on Aereo and the Supreme Court. 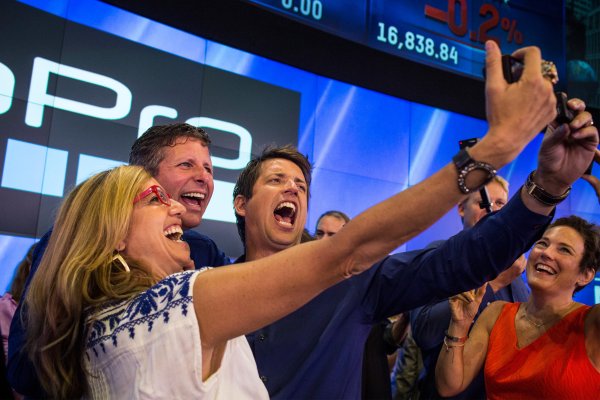