It's Time to Write LGBT History into the Textbooks

Dayne Law (R) and several others wave flags and cheer outside the Utah Pride Center after the 10th Circuit Court in Denver ruled and upheld same sex marriage in Utah on June 25, 2014 in Salt Lake City, Utah.
George Frey—Getty Images
By David Carter

On the 45th anniversary of the Stonewall riots—an event that transformed a minuscule pre-Stonewall gay rights movement into a mass movement—LGBT history is still being left out of the public school curriculum. California is the sole exception to this rule, having passed the Fair, Accurate, Inclusive, and Respectful Education Act in 2011. It mandated the inclusion of the political, economic and social contributions of LGBT persons in textbooks and the social studies curricula in California public schools. While the control of curriculum and the choice of textbooks rests with local school boards, it’s time for state legislatures to take up the issue so that such curricula are adopted nationwide.

The 1960s homophile movement, which preceded the gay and LGBT rights movements, determined that the oppression of homosexuals rested on three things: that psychiatry declared gay men and lesbians to be mentally ill, that the law criminalized homosexual sex acts and that religions condemned homosexuals as sinners. The notion by society at large that homosexuality was a mental illness was seen as the most insidious, and LGBT civil rights pioneer Frank Kameny said in 1964 that “the entire homophile movement . . . is going to stand or fall upon the question of whether or not homosexuality is a sickness, and upon our taking a firm stand on it.” In 1973, the American Psychiatric Association declassified homosexuality as a mental illness. Thirty years later, the Supreme Court ended the criminalization of homosexual acts with Lawrence v. Texas. Over the decades, both Judaism and Christianity have become more accepting of homosexuality.

The omission of LGBT history from the nation’s classrooms is a serious problem for a number of reasons, first and foremost of which is that a democracy requires tolerance, fairness and an informed citizenry. This gap in history textbooks sends the message that our story is one of inferiority. Today’s youth are growing up in a world where LGBT issues are constantly in the news and discussed around the dinner table. Moreover, LGBT rights are a worldwide struggle now, and students need to understand that to be prepared for global citizenship.

LGBT children especially need to know this history, for they can be born into families that might not recognize or accept them. All children need dignity, and LGBT children also need a valid identity. Identity is usually formed from a shared narrative—in other words, a common history. Keeping this subject matter out of textbooks offends the dignity of LGBT children and may contribute to the significantly higher rates of suicide, drug use and depression among LGBT youth.

For the most part, our history textbooks have either distorted information or censored LGBT issues. It’s common for school children to study the classic age of Greece as the fountainhead of democracy. But are they told that the Greek philosophers upheld male homosexual love one as of their highest social values? Hitler exploited fear of homosexuals as an integral part of his climb to power leading up to World War II. He made good on his word too, sending homosexuals to their death in the concentration camps. When the Allies liberated the camps, homosexuals were the only groups they did not free, and for decades Germany refused to pay reparations to them. With regard to the declassification of homosexuality as a mental illness, students should know that Sigmund Freud didn’t consider homosexuality a pathology. It was Freud’s American adherents who distorted his conclusions, resulting in gay men being incarcerated in mental hospitals and deemed unfit for employment, especially for government employment.

These few topics suggest just how complex LGBT history is. I was taught about Brown v. Board of Education in my high school in Jesup, Georgia, in 1969. Our school had only recently been integrated and issues about race, such as busing and affirmative action, were still in the news and contentious. If I could learn about Brown v. Board of Education in Jesup only four years after the Civil Rights Act passed, it is high time—41 years after the declassification of homosexuality as a mental illness and 11 years after the decriminalization of homosexual acts—that U.S. public schools see to it that today’s students are adequately informed about the debates they see in today’s headlines over LGBT issues. For America to keep its promises of fairness and equality, LGBT history must not be kept in the closet.

David Carter, the author of Stonewall: The Riots That Sparked the Gay Revolution, is currently writing a biography of pioneer LGBT activist Frank Kameny. 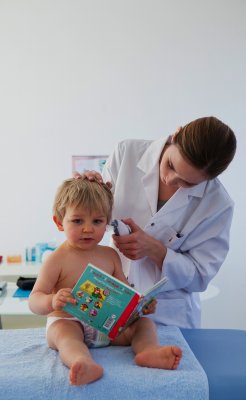 Why Pediatricians Are Prescribing Books
Next Up: Editor's Pick