Mexico Is America's Favorite Team (For a Day)

Mexico's forward Javier Hernandez reacts after scoring his team's third goal during a Group A football match between Croatia and Mexico during the 2014 FIFA World Cup on June 23, 2014 in Recife, Brazil
Javier Soriano—AFP/Getty Images
By Bill Saporito

When Mexico takes on the Netherlands in the World Cup round of 16 on Sunday, it will become America’s favorite team. At least for a couple of hours, many of the 30-million-plus people in the U.S. of Mexican heritage will be rooting for El Tri—the green, white and red. The game will be carried on both ESPN and Univision. Reflecting the growing importance the Hispanic community, ESPN bought the English-language rights to all Mexican national team games through 2018. “We are students of our audience, and our audience is changing rapidly,” says Scott Guglielmino ESPN’s senior vice president for programming and the X Games.

Also reflected is the growing popularity of soccer, as this year’s record viewership for U.S. games has demonstrated. Not long ago, the U.S. national soccer team used to dread playing a home match against Mexico. Not because the Mexicans were difficult to beat, which they were, but because the fans of El Tri would outnumber U.S. supporters in any large stadium in, say, Miami or Dallas, and turn it into an away-at-home match. The U.S. solved this problem by staging its home matches in Columbus, Ohio, in the winter and controlling the ticket sales so that American fans got the seats.

Oddly enough, the competition between the two teams has changed: In the last year or so, the U.S. has owned Mexico on the field. Mexico struggled mightily to qualify, dismissing four coaches in the process. In their final qualifying game, players were a minute away from being eliminated, losing to Costa Rica while the U.S. was tied with Panama. But a last-gasp U.S. goal sank Panama to put Mexico in a playoff with New Zealand, which El Tri won. The team has played much better since.

With an Hispanic population of 53 million, the market for the Mexican team has never been better. And as that demographic becomes ingrained in the American fabric, networks such as ESPN and marketers such as McDonald’s take advantage of it. McDonald’s has even run a television ad that plays up the cultural conflicts that Mexican-Americans might be experiencing over who to root for. “When acculturation occurs over generations and English becomes more and more the dominant language— that’s something to make sure we have a foot in,” says Guglielmino, no pun intended.

Mexico’s soccer federation also takes a practical view of the cross border competition for fans. It relies on Major League Soccer’s marketing arm– Soccer United Marketing—to manage its games and promote the team in the U.S. And with good reason. Mexico played its World Cup warm-up games in places like Gillette Stadium near Boston, Soldier Field in Chicago and San Antonio’s Alamodome, drawing big crowds everywhere. El Tri’s stars such as Oribe Peralta or Giovanni Dos Santos are instantly recognized in cities with big Hispanic populations. And Mexico’s hyperexcitable hulk of a manager, Miguel Herrera, is becoming one of the personalities of the tournament. “From our perspective , they add a rich story line in the U.S., with the way they qualified,” says Guglielmino. “There’s so much drama now that Herrera has these guys turned around.”

As long as Mexico can stay in it, that is. El Tri now plays the mighty Oranje of Holland. And while Mexico has qualified for the World Cup 14 times, the team has had difficulty getting out of the round of 16, always running into the likes of an outfit such as Argentina. Even the U.S. did a number of them in 2002. Mexico and the U.S. could possibly play against each other in the the semifinal. Until that happens North America’s fiercest rivalry will be forgotten. 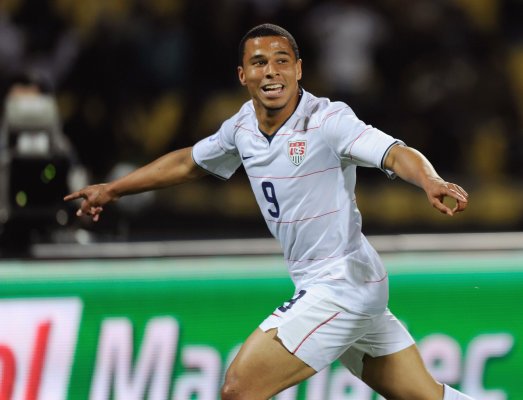