The publisher of Hillary Clinton’s new political memoir, Hard Choices, told Buzzfeed Thursday that sales of the book have been effectively banned in China.

The reasons are not hard to figure out. Clinton’s book, though notable for its careful treatment of controversial domestic issues, is full of criticism of the Chinese regime and its existing policy of state censorship. She also goes into great detail about her interactions with senior Chinese officials on some of the most sensitive issues for China, and maintains a consistent tone of disapproval for the regimes suppression of Democratic rights.

Here is a cursory glance at seven passages from the book that may be the most offensive to the Chinese:

She knocks China for blocking a U.N. resolution to call out North Korea for sinking of a South Korean naval vessel.

“Here was one of China’s contradictions in full view. Beijing claimed to prize stability above all else, yet it was tacitly condoning naked aggression that was profoundly destabilizing.” (Page 56)

“Things had only gotten worse in 2011. In the first few months, dozens of public interest lawyers, writers, artists, intellectuals, and activists were arbitrarily detained and arrested.” (Page 63)

She describes the work of Chinese censorship efforts on her speeches.

“In China, however, censors went right to work erasing mentions of my message from the Internet.” (Page 64)

She describes confrontations with President Jiang about China’s treatment of Tibet.

“‘But what about their traditions and the right to practice their religion as they choose?’ I persisted. He forcefully insisted that Tibet was a part of China and demanded to know why Americans advocated for those ‘necromancers.’ Tibetans ‘were victims of religion. They are now freed from feudalism,’ he declared.” (page 68)

She questions the power of former Chinese President Hu Jintao

[H]e lacked the personal authority of predecessors such as Deng Xiaoping or Jiang Zemin. Hu seemed to me more like an aloof chairman of the board than a hands-on CEO. (Page 72)

She tells the story of dissident lawyer Chen Guangcheng taking refuge in the U.S. embassy.

Bob hustled Chen into the car, threw a jacket over his head, and sped off. Bob reported back to Washington with an update from the car, and we all held our breath, hoping that they wouldn’t be stopped before reaching the safety of the embassy grounds. (Page 87)

She describes the Chinese crackdown on speech, and the nation’s censorship regime.

“The ‘Great Firewall’ blocked foreign websites and particular pages with content perceived as threatening to the Communist Party. Some reports estimate that China employed as many as 100,000 censors to patrol the web.” (Page 548) 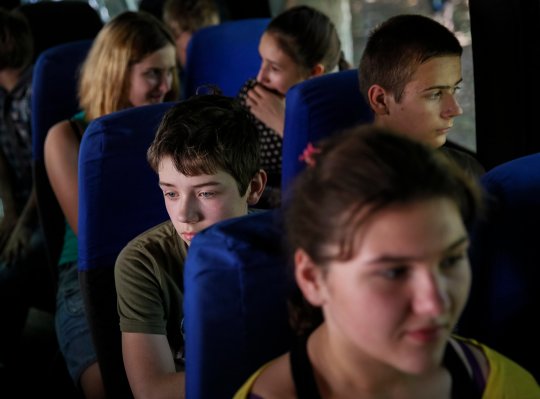 Over 100,000 Ukrainians Have Fled to Russia
Next Up: Editor's Pick