World Cup's Teddy Roosevelt Was Sent By an Ad Agency

“Teddy Goalsevelt,” the Teddy Roosevelt look-alike who rode into the World Cup in full Rough Riders regalia, is a little hard-up for cash, according to the ad agency that sent him there.

Cavalry Agency, a subsidiary of advertising giant WPP, launched a fundraising campaign to keep Teddy Goalsevelt, a.k.a. Mike D’Amico, in Brazil. Goalsevelt has made waves at the tournament, appearing opposite Will Ferrell at a pep rally and valiantly leading the U.S. soccer team through floodwaters by pointing a gloved finger toward the stadium.

Sadly, budgeting for a vacation doesn’t seem to be Goalsevelt’s strong suit. “Unfortunately, Teddy is scheduled to return to the States at round 1’s conclusion,” Cavalry wrote in an open call for donations on its Gofundme page. “We here at Cavalry, the advertising agency where Teddy (Mike D’Amico) works, see him as the team’s mascot now. And we don’t think we’re alone.” The agency offered up to match upwards of $2,500 in donations. His fans, with a big assist from McDonald’s, rallied to their side. Listerine took up the cause to keep #TeddyInBrazil. Now flush with $5,513, Goalsevelt has triumphed as the self-appointed mascot for America. Especially corporate America. 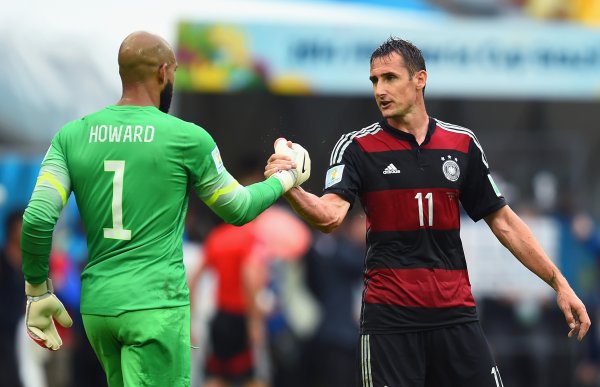 World Cup: Round of 16 Finally Begins
Next Up: Editor's Pick