Amazing Facts About Love and Marriage

Americans love love and believe in it. In our new book The Book of Odds: From Lightning Strikes to Love at First Sight, we report that the odds an adult believes in love at first sight are 1 in 1.9, more than half of us! Even more of us believe in true love, Plato’s fable of each of us having a missing half in the world who completes us and only us. The odds an adult believes we each have no more than one true love are 1 in 1.4.

Back in the Mad Men era, living together was unusual, and seen as inconsistent with building a lasting, non-rickety household, hence the term “shacking up” — but things have changed in a big way. In 1960, the odds an adult 20 or older “shacked up” were 1 in 141. Those are the odds someone is an atheist. The odds an adult is cohabiting in 2011 are about 1 in 24. This is a cultural sea change!

Anxiety about whether cohabiting leads to good marriages or increases the likelihood of divorce is seen in a lot of research on the topic. The New York Times called it “the cohabitation effect.” There is research, such as Jay Teachman’s, which shows higher divorce rates for some couples who move in together first, but it is not clear what is the cause, what the effect. Are those moving in together less committed or more tentative and their subsequent marriages shakier? Or does the lost mystery and conflicts of sharing a household negatively influence the course of a subsequent marriage?

One theory proposed by clinical psychologist Meg Jay in the Times is what she calls “gender asymmetry.” Women, she suggests, see cohabiting as a step toward marriage, while men, or some of them, see it as a way to stall the big decision. It is easy to see how such conflicted motives could be unhealthy for a marriage if never aligned.

Commitment does seem to be the key. A study by the National Marriage Project found that if couples were already planning to marry each other in the near future, their odds of staying together were equal to those of couples who don’t move in together.

Cohabitation is becoming the norm and most of those who live together want to marry and most actually do. The odds? According to Pew Research, 1 in 1.6 or 64 percent!

Then Comes the Engagement

The odds a person will get engaged in a year are 1 in 66.7. Those are the same odds that an adult will report having told eight lies in the past day. The question “Will you marry me?” is too important for dissembling, though.

Love trumps money. In fact, the odds a person would rather hear “Will you marry me?” over “You’ve won the lottery” are 1 in 1.7 or 59 percent. Who can forget their first kiss? People are more than twice as likely to say getting engaged is more memorable than the first peck.

When asked about proposals, women had a request. Don’t do it on Valentine’s Day or their birthday. 69 percent prefer it happen on a day with no other significance, so this day becomes unique on her calendar.

Are you one of those guys who would like to propose on the Jumbotron at the ballpark with tens of thousands watching? If so, Swimmingly has found out the cost of doing so at every Major League Baseball stadium. Be forewarned, however, that the vast majority of people want this moment to be a private one. And what happens if she says no? We don’t know the odds but here is a video of a rejection at center court of an NBA game, more devastating than any Dikembe Mutombo has ever dealt.

Just imagine being helped up from bended knee by the plush team mascot. No wonder proposals are so unforgettable: there is so much at stake!

Once she says “Yes!” the average engagement lasts 14 months, the gestation period of a giraffe. The average diamond engagement ring is $6,348, which no honest giraffe could afford.

Then Comes the Wedding

This is an almost universal experience. The odds an American will get married at least once in their lifetime are 1 in 1.14 or 88 percent. There are 2.4 million marriages performed each year, about 44,000 each weekend, with less than 2,000 on the other days of the week.

And they are expensive. The average traditional wedding costs $28,000, has 165 guests, and takes place in June, August, May, or July in that order. The conventions of payment have changed, in part because 1 in 3.3 grooms and brides have been married before. Those are about the odds the bride and groom will pay the bill themselves (1 in 3.1). The odds the bride’s parents pay are 1 in 5.3, and the rest of the time everybody contributes.

As if the guests were being invited to the honeymoon, 1 in 6.25 or 16 percent of weddings are now destination weddings. They cost about the same as the traditional since average number of guests is 45 not 165. They are more likely to be paid for by the couple, who tend to be highly educated and have an average household income of $110,000. The guests spend an average of $400 to attend, which may explain the profile of the destination wedding couple: it would be awkward if the travel costs were a burden to friends and family. Where do folks hold these weddings? Viva Las Vegas! The city of sin is also a city of romance to many, with 125,000 weddings a year. Hawaii is also popular, as are other warm weather destinations.

The average age of bride and groom keeps rising. In 1960, the median age of grooms was 23; now it is 29. The median age for brides was 20 and now it is 27. It is not surprising given the economics. The economic advantages for women are significant. Women with a college degree who wait to marry until at least 30 earn $18,152 more a year than women who marry before 20. Women with a high school degree who wait until 30 earn $4,052 more.

Then Comes the Baby Carriage

One more profound cultural shift, a tsunami, is slowly gaining force. No longer can one presume that the baby carriage follows marriage, no matter how persuasive the rhyme may be. Today the odds a first birth is to an unmarried woman are 1 in 2.1 or 48 percent. (The odds for all births, not just first ones, are 40 percent.) The trend line for first births suggests that we will soon be reading about how more babies are born out of wedlock than in.

These patterns alarm many, since most agree that it is good for a child to have two parents, but whether they must be married is not clear. So much is changing in the norms of family life that many are inventing their own ways of being family, new norms for different times.

One fascinating and wonderful trend is the rise of “stay-at-home dads” and men who play a greater role in parenting than their fathers did.

In 2010, there were 154,000 stay-at-home dads, caring for 287,000 children. It should be obvious that as women spend more time than ever before in the workplace, men must spend more time at home.

The odds a preschooler will be cared for by his or her father during his or her mother’s working hours are 1 in 6.25. As a father who did just that, I can say that this was no burden, but a chance to get to know my kid in some of the periods of her greatest charm and insight. The day when she scraped her knees and called out “Mommy-Daddy” was one of the proudest of my life. You have to earn the right to be trusted to bring Band-Aids and consolation, and it appears I had.

If there is something better in this life, it is rare and beyond price. 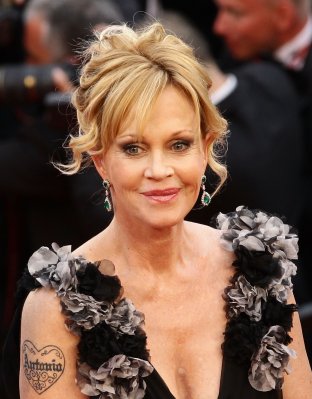 Melanie Griffith and 6 Other Celebrities Who Had Tattoos of Lovers Removed
Next Up: Editor's Pick