ATO Records
By Consequence of Sound

At Phish’s Halloween concert last year, the band began its second set with a somewhat esoteric reference to golf, of all things: “You’ll never win a major only shooting par.” The lyric belonged to “Wingsuit,” the first of 12 songs Phish debuted that night as a yet-to-be-recorded future album. Although some fans felt tricked out Phish’s usual Halloween cover-album tradition, for me and for many other phans, it was pure treat. In the ensuing eight months, we’ve replayed recordings of 10/31/13 set II over and over again, analyzing meanings, contextualizing the event and nerding out, all the while pontificating on how the eventual album would sound. Despite our propensity to unjustly discard the studio albums while cherishing the live recordings, many Phish fans wondered: Might this album be the one that breaks the jam band studio-album stigma?

Now we have our answer with Fuego, Phish’s 12th studio album and second since the triumphant 2009 comeback from their 2004 breakup. The answer is probably no: This will not be Phish’s In the Dark [the Grateful Dead’s 12th studio album, which was a surprise hit 20 years into the band’s career], catapulting them into unprecedented popularity. Partly it’s just a different era in the industry, and partly there’s no single that touches the musical zeitgeist as readily as the Dead’s “Touch of Grey” did in 1987. Despite that, the first single, “Waiting All Night,” is excellent, with a lugubrious, lo-fi sheen that floats on deep-space bass notes, brightened with acoustic guitar strums.

These new songs display veteran craftsmanship despite only one of them, keyboardist Page McConnell’s superb “Halfway to the Moon,” being honed over years of live playing. Granted, I liked most of the Fuego songs when I heard them live on Halloween and I’ve grown to love them since, finding beauty in the nuances: guitarist Trey Anastasio’s passionate and pleading chorus to “Waiting All Night,” the shimmering gleam of Floyd-esque psychedelia on “Wingsuit” and the silences between notes of “Wombat” that make it one of the most unique and exciting funk grooves Phish has created.

Judging Fuego on its ability to stand alone as a work of studio art, it has much to applaud. Phish wisely avoided trying to capture the live experience on wax, instead hiring pedigreed classic-rock producer Bob Ezrin (Lou Reed, Pink Floyd, Alice Cooper). Ezrin’s most noticeable contribution is the addition of horns and backup singers, most successfully done on “555,” bassist Mike Gordon’s minor-key funk stomp. Punchy horn interjections and powerful female vocal responses add a touch of Stax magic to the Little Feat-flavored groove, not surprising since Phish recorded Fuego in both Nashville and Muscle Shoals, in addition to the band’s Vermont barn-studio.

WATCH: David Bowie's and Mick Jagger's "Dancing In The Street" Video Without The Music

Like the compositions themselves, the brilliance of Ezrin’s work here is in the nuances. He opted to use a live recording of “Fuego” as the basic track, letting its raw energy shine through in the ass-kicking classic-rock guitar riffs and the wild, trance-like speed-funk breakdown. He slowed down “Waiting All Night” and “The Line” from their live incarnations by a hair, allowing the former to ooze a touch more lethargically and the latter to settle into its groove pocket a bit more easily. The ’60s psych pop of “Sing Monica” is crisp and endlessly danceable, with a blistering guitar solo to close out the track.

There are spots where Phish and Ezrin stumble. The most glaring is “Wombat,” a tune that needs to be approached as silly, but whose lyrics are delivered seriously, as if Phish didn’t realize the joke only works if they ham it up. The edges are smoothed over on the normally intense funk jam; not even Ezrin’s horns and soul vocals save the track.

Thankfully, this album’s shortcomings are not due to a drying up of creativity or motivation. Far from being a celebratory nostalgia lap, Phish’s 30th anniversary year of 2013 produced mind-blowing jam after jam after jam. Fuego reveals a band not content to merely keep touring as it always has, playing the workhorse “You Enjoy Myself” every fourth night (although they’ll likely still do that). Phish wrote most of these songs together, with the basic rhythms and progressions coming directly from some of their best recent concert jams. Their democratic approach to composition signals a more mature band, while individual contributions from Gordon and McConnell are some of their strongest to date.

This is not a band reveling in their storied past and “only shooting par.” Fuego is new and fresh, in both content and intent, changing things up, sinking a few birdies, and settling for a bogey or two.

More from Consequence of Sound: 11 Albums No Kitchen Should Be Without

More from Consequence of Sound: There’s a Daft Punk Documentary in the Works 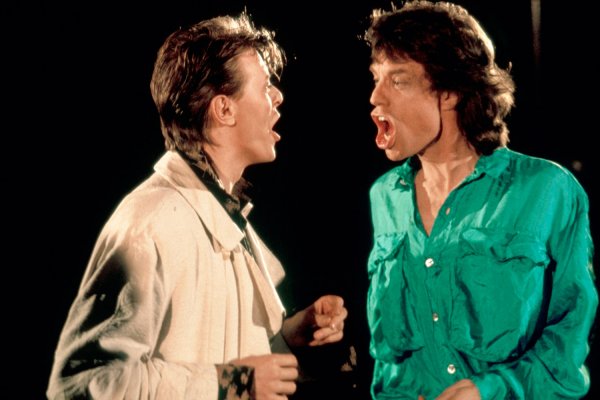 WATCH: David Bowie's and Mick Jagger's "Dancing In The Street" Video Without The Music
EDIT POST