A bipartisan group of former senior intelligence and military officials broadly criticized the Obama Administration’s program of targeted drone strikes Thursday and called for the U.S. to reassess the practice.

Their critique, in a report published Thursday by the Washington think tank Stimson Center, represents the latest challenge to the use of armed drones for targeted killings, days after courts forced the release a legal memo justifying the killing of alleged American terrorist Anwar al-Awlaki in a strike in Yemen. The report warns that armed drones create a “slippery slope” that could lead to continual wars, as the relative low-risk associated with their use could encourage the U.S. to fly more missions.

Among other recommendations, the panel called for the U.S. to conduct a strategic cost-benefit analysis of the their use, provide greater transparency in the process, and shift the authority over the program away from the Central Intelligence Agency and to the military.

“We are concerned that the Obama administration’s heavy reliance on targeted killings as a pillar of US counterterrorism strategy rests on questionable assumptions, and risks increasing instability and escalating conflicts,” the report says. “While tactical strikes may have helped keep the homeland free of major terrorist attacks, existing evidence indicates that both Sunni and Shia Islamic extremist groups have grown in scope, lethality and influence in the broader area of operations in the Middle East.

The panel, which was jointly led by retired General John P. Abizaid, the former head of United States Central Command, and Rosa Brooks, a law professor at Georgetown University, also called for President Barack Obama to create an independent commission to regularly review the use of lethal drones, or unmanned aerial vehicles.

Caitlin Hayden, a National Security Council spokesman, told the New York Timesahead of the report’s release to the public that the Administration would review the findings on the use of armed drones but added that the U.S. needs to preserve “the ability to continue those operations.

“The administration is exploring ways we can provide more information about the United States’ use of force in counterterrorism operations outside areas of active hostilities, including information that provides the American people with a better understanding of U.S. assessments of civilian casualties,” she told the Times. 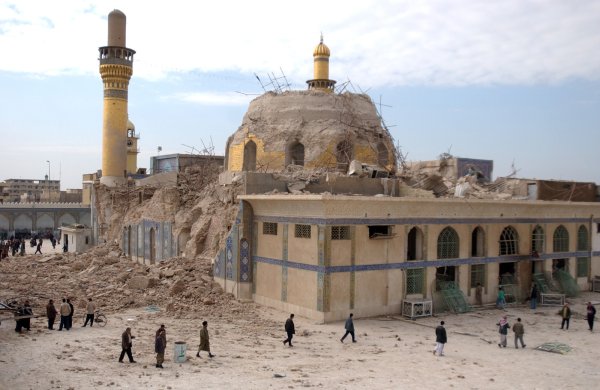 One Holy Site Could Restart Iraq's Civil War
Next Up: Editor's Pick