More than 14 years after the final episode of final episode of Boy Meets World aired on May 5, 2000, Cory, Topanga and a cast of new and old faces returns tonight for the long-awaited spinoff, Girl Meets World. This show’s titular “Girl” will be Riley (Rowan Blanchard), the 12-year-old daughter of Cory (Ben Savage) and Topanga (Danielle Fishel). Cory will be conveniently slipping into the role of once inhabited by Mr. Feeney (William Daniels) as Riley’s history teacher — though hopefully he’ll be leaving the sweater-vests in Feeny’s closet. As was the case with Boy Meets World, the new show, which premieres tonight (June 27) at 9:45 p.m. EST on the Disney Channel, will focus on the kids, but a slew of old standbys — including Feeney, Shawn (Rider Strong) and Mikus (Lee Norris) — have been confirmed to reprise their roles this season.

(MORE: Who Should Return for the Boy Meets World Spin-Off?)

TIME spoke with Savage — who assured us that we’ll be seeing the same old Cory, just, um, older — about what to expect from GMW’s debut season:

(MORE: Where Is the Cast of Boy Meets World Now?)

TIME: Over the course of Boy Meets World, Cory evolved a lot from being more of a precocious pre-teen into a more curmudgeonly member of society, at least in relation to some of the other characters on the show. Was that something your were consciously aware of at the time?

Savage: Yeah, he just kind of became an old man. I think Cory was just always sort of a grumpy old man, in a loveable way. It was always kind of in there, and got solidified with time. He liked what he liked. He liked to wear his sweaters and he liked his same routine and he liked cupcakes and cake and sitting at home with his wife. He’s the kind of guy you grew up with who always knew what he wanted and that’s who he was, and he never had to go through some exploratory phase where he had to date a bunch of girls or go out a lot. I think he was just the type of personality that settled from childhood, and that suited him just fine.

When Boy Meets World ended, did you feel like you were completely done with that character and with that world?

I think it was mostly that we had all moved onto other projects and were living our lives, and this opportunity came up and we all discussed it at length, especially Danielle and I. We just decided, let’s pull the trigger and see what happens. So far the response has been pretty positive, so we’re happy about that.

Was there anything in particular that convinced you this was something that you wanted to revisit?

I don’t know that I could reveal that, but there was definitely a series of conversation with the producers and Danielle and just a bunch of things fell into place, and everything just seemed to line up.

My first instinct when I heard about the new show was to think, “Oh, it’s going to be a show where the protagonist was going to be your younger brother from the original series.”

Did I have a younger brother?

In the very final season—

Oh my gosh, you really are a fan. You’re right, you’re right.

So to me, that was the other way it could have gone, other than it being Cory and Topanga’s child. But was it obvious to you that, “Oh, of course this would be our child?”

One of the things that struck me about Boy Meets World is that, while it was obviously geared toward a younger audience, it could also appeal to adults. Is that something that you’re hoping for with Girl Meets World?

Oh sure. I think that goes without question. I think just based on people who watched Boy Meets World, it’s not going to be just some wacky kids show. The characters, the writing — it’s all the same. Cory’s still Cory. In the episodes we’ve shot, my character’s still the same neurotic old man that everyone came to know when Boy Meets World was on. That stuff’s all there. Michael Jacobs, who was there for every episode of Boy Meets World, is at the helm again, and a lot of our writers from Boy Meets World are back. And a lot of the people from the original series are back, not just Danielle and myself.

A few of the original cast members are back, and we wanted to replicate Boy Meets World as much as we could, so a lot of our crew from the original show is back also. So all that’s going to be there, but I don’t want fans to turn it on and expect — the emphasis and priority is going to be on the kids. If we just did the continuation of Boy Meets World, that would be fun for a few minutes, but we want to do another seven years for a brand new generation. That’s our intention and that’s our hope and I think we’re off to a pretty good start.

Have you spoken at all with William Russell or Betsy Randle about how they approached playing your parents, and whether that’ll influence at all how you and Danielle approach your roles as parents?

First of all they were wonderful. Rusty and Betsy were terrific parents on-set and off, and they were always wonderful to me. And sure, all that stuff comes into play. When I was little, Rusty, who played my father, used to take me to Clippers games after work. We’d hop in his Bronco and go right from set. It wasn’t just on set — it was also how you treat the kids. And now I’m working with my “kids,” on the show and I’m trying to be the cool dad. I don’t have my own children so I’m trying to be a hip father and have them not make too much fun of me, which they do a lot, but that’s okay.

That’s how kids are I guess.

How has all the new technology that kids these days have access to these days made the show different from the original series?

You know, you just have to adapt. You could say the same thing if you watch old episodes of Seinfeld. A lot of those episodes wouldn’t have made sense if they just had cell phones. But Curb Your Enthusiasm came out and they adjusted to it. I think the morals and the lessons and the stories are there, and the scripts are tinkered with a little and changed around. The comedy and the material are all going to be there, but like anything in like, you have to adapt with the times and roll with the changes. However, Instagram on set is probably going to be an issue, but that’s okay.

Toward the college years of Boy Meets World, things got increasingly zany, for lack of a better word, particularly with Will’s character. As you guys matured as actors, were you able to have more of a role in that being the direction that the show took?

It definitely got more zany, that’s a good word. I think at that point in the show, the writers knew us so and we knew them so well, and they wrote based on our characters and personalities. They knew that Cory was this grouchy old man who wanted nothing more than to stay home at night with Topanga and eat cake, and they knew that Will — his character was so weird in the end, and so stupid, but in the most loving way. I think the writers just kind of wrote to us as actors, and they just knew the characters so well, they knew what we were capable of and that’s why the sixth and seventh seasons were the most fun, because we were just getting a little weird for a while.

Some of the memories that I have from those seasons are of Eric as “Plays With Squirrels” or of Cory pulling the blanket off Shawn and Topanga and saying, “Undahhhpants.” It just seemed like a situation where the writers and producers were taking these characters and putting them in a slightly different universe and saying, “Let’s see how strange this can get.”

I really can’t argue with that. We were having so much fun and again we were so comfortable. We were on T.G.I.F. and were just kind of going for it and having a ball. I know it seems weird, but I think it struck a chord with people and I’m not sure there were many shows on TV at that time — or even still — that were doing that sort of thing. But I think the continuing theme throughout was an earnest young man who was growing up in the world and had a big heart and a wonderful girl that we loved and a wacky brother and a good best friend, and I think what were doing with us just sort of going off the rails — the themes were still pretty consistent throughout, and I think the audience stuck with us because they thought, “No matter how wacky these characters get, we can trust them.”

Is that something you feel like is carried on on with Girl Meets World?

That’s what we’re going for. But like you said, it took six or seven years for those characters to get fleshed out and fully become who they were. We’re going all the way back to Season 1, Episode 1, Scene 1, Take 1. It’s a brand new slate. My character is fine. Everyone knows who Cory is — I’m back, I’m my daughter’s history teacher, and that’s me. The kids are finding themselves and it’s going to take some time for them to figure out who they are and hopefully in 20 years one of them will be having a conversation with someone from TIME about how their characters got weird in six or seven seasons. You’ve got 20 years of experience looking back, and we’re going to need 20 years to really appreciate Girl Meets World. 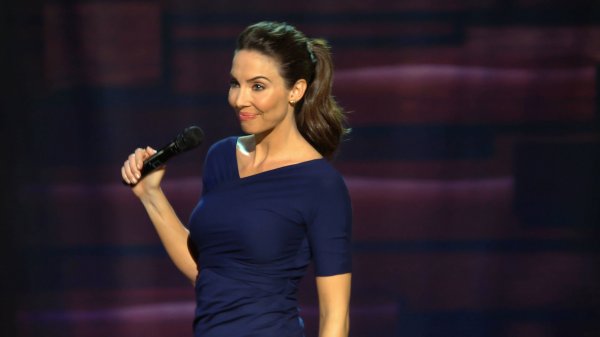 Whitney Cummings: "Crazy" Is the "New C-Word"
Next Up: Editor's Pick