Why Abortion Clinic Protestors May Not Matter

Are they allowed to do this? Are they going to hurt me? Will they be here when I’m done?

Michelle Kinsey Bruns is used to being asked these questions when she volunteers as an abortion clinic escort. Women seeking abortions at clinics across the country often must pass by protestors carrying signs, pamphlets and sometimes even megaphones. In response, many clinics employ or seek volunteers like Bruns to usher women seeking abortions through the gauntlet.

In an effort to further shield women from protestors, Massachusetts enacted a law in 2007 that created a 35-foot buffer zone outside clinics and barred anti-abortion activists from entering it. The Supreme Court unanimously struck down that law Thursday, saying it violated the First Amendment rights of protestors. In effect, the ruling means that women in Massachusetts and across the country are likely to have more contact with anti-abortion protestors in the future. What’s not clear, however, is if more contact—regardless of proximity to patients—will have an impact beyond upsetting women. In short, do protestors actually dissuade women from terminating pregnancies?

It’s hard to say. Academics who study the effects of anti-abortion protestors on women’s decision-making say it’s difficult to collect data on women who may change their minds as a result of protestors. These women may never have contact with abortion providers or researchers studying the topic. But on a related subject—the effect of protestors on women’s states of mind—there is more data.

A 2013 study published in the journal Contraception found that protestors affect the emotional state of women entering abortion clinics. The study, by researchers at the Bixby Center for Reproductive Health at the University of California, San Francisco, included interviews with almost 1,000 women who had abortions and were asked whether contact with protestors affected them emotionally. Of the women who saw protestors outside clinics, 41% reported feeling upset because of it. In addition, the more contact women had with protestors, the more upset they felt. But asked if the protestors impacted their feelings about actually having abortions, the women reported their feelings were the same regardless.

“Protestors are upsetting, but they don’t have an effect on women’s long-term feelings about their abortions,” says Dianna Greene Foster, the study’s lead author. “A woman’s reasons for having an abortion are much more salient than the brief yelling or talking from protestors.” Earlier academic research reached the same conclusion.

In the absence of hard data, anecdotal evidence suggests that some women arrive at abortion clinics and opt not to enter due to the presence of protestors. Anti-abortion protestors routinely claim they talk women out of terminating pregnancies. “I can’t refute that,” says Tammi Kromenaker, executive director of the Red River Women’s Clinic, the only abortion provider in North Dakota.

Kromenaker has security cameras outside her facility and has seen, on monitors set up inside, some women turn back while protestors are crowding the sidewalk outside. “I know there have been women intimidated out of coming into the building. I see them leave and I see the protestors hug each other,” Kromenaker says. But sometimes, she adds, “that woman calls us the next day and says, ‘Can I reschedule for next week?’” On the flip side, Kromenaker says, “If somebody you don’t know outside a clinic made you change your mind, then good, you didn’t want an abortion in the first place.”

In a brief filed on behalf of anti-abortion protestors who initiated the Massachusetts buffer zone case, the lead petitioner, Eleanor McCullen, is described as a grandmother in her 70s “who aims to stand on public sidewalks near abortion clinics in order to reach this unique audience, at a unique moment, in a compassionate and non-confrontational way.”

While the behavior of anti-abortion protestors at clinics varies widely, clinic owners and volunteers who escort patients inside say confrontation is common. A protestor at Kromenaker’s clinic once followed a patient inside and only left after Kromenaker threatened him with a stun gun. (He was subsequently arrested for trespassing and ordered to stay at least 50 ft. away from the clinic.) Renee Bracey Sherman, a graduate student who volunteers as an escort at abortion clinics in Washington, D.C., and Hagerstown, Md., says women seeking abortions are often visibly unnerved by shouts from protestors. “I know there’s a discussion about them counseling people, however, I’ve never seen someone counsel. They yell, they say very horrendous things. It’s never actually, ‘Hey, let’s just talk about your options,’” Sherman says. “I’ve seen patients going into the clinics crying, just terrified.”

Bruns, who writes the Twitter feed @ClinicEscort, which has more than 15,000 followers, has volunteered as an escort for five years in clinics in eight states. “The fact of the matter is that anti-choice rhetoric is deeply embedded in the American mind—that abortion is a horrible, brutal thing that’s dangerous,” Bruns says. “And women turn up anyway. When they see a crowd of protestors shouting with video cameras, it gives them a moment’s pause, but they keep coming. They may cry, but they have already make their decision.”

As the Supreme Court ruling makes clear, however, making someone cry is not illegal. Abortion is a constitutionally protected right, and so is saying it’s morally wrong, even if you say it loudly—so long as you are standing on a public sidewalk. 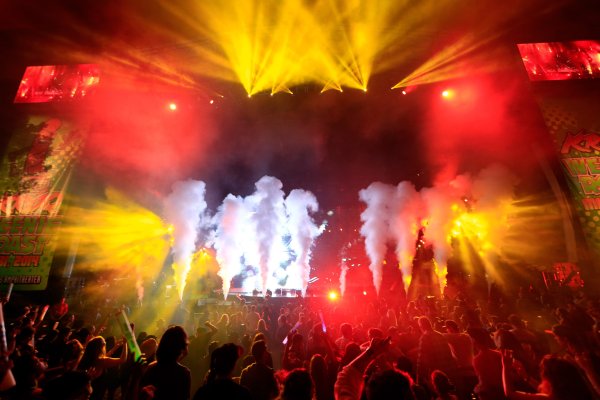 Dozens Hospitalized at Avicii Boston Concert
Next Up: Editor's Pick