Billionaire scientist Joshua Joyce (Stanley Tucci) has found a new element called transformium — harvested from the spare parts of captured Autobots — and exults, “We can change anything into anything!” Michael Bay must think his Transformers series, based on the Hasbro toys and TV series, is equally malleable. After three episodes headlined by Shia LaBeouf as a young adult who befriends the Autobot Optimus Prime, Bay launches a new cast of characters to fit into the ongoing intergalactic battle of Prime and his giant-car pals against the bad-bot Decepticons.

Both a sequel and a reboot, Transformers: Age of Extinction, which we’ll call Trans4mers, is the blockbuster the film industry has been waiting for all year. The movie is likely to register 2014’s first $100 million three-day weekend at the domestic box office and match or exceed the $1.1 billion worldwide take of Bay’s last Transformers installment, the 2011 Dark of the Moon. It also bears the signature excesses and lapses of Hollywood’s most incorrigible director of megabudget action pictures and then some. In its third hour, when the movie spins off its narrative rails, Trans4mers goes botsh-t crazy.

(READ: Corliss’s review of Transformers: Dark of the Moon)

The new hero is Mark Wahlberg as Cade Yeager, a dreamy, overmuscled tinkerer-inventor scraping by in rural Texas. Still grieving the loss of his wife, he denies their sexy teen daughter Tessa (Nicola Peltz) any contact with boys, saying, “This is a non-dating family.” The subtext for Cade’s possessiveness: he doesn’t want Tessa to get pregnant when she’s too young, as her mother did. In essence, he’s trying to retroactively erase the circumstances of his daughter’s birth. So Cade is furious when he learns that Tessa has a boyfriend, Shane (Jack Reynor, looking like an impossibly hunky Seth Rogen), who as a race-car driver is into machines, just like her dad. The cycle repeats. For a while this mainstream movie wanders into the indie-film Land of Weird, but like so many other aspects of Ehren Kruger’s screenplay, it’s put out there for the audience to puzzle over, then dropped.

Having bought an old truck at the junk sale from a closed movie theater, Cade fortuitously reignites Optimus Prime (again voiced by Peter Cullen), who’s been petrified like the Tin Man in The Wizard of Oz until Cade provides the oil can. “You’re supposed to call the government,” warns Cade’s surfer-dude assistant Lucas (T.J. Miller, channeling the early Jason Lee). “It’s the American thing to do.” Too late. The government — specifically, a CIA black ops squadron headed by the Rumsfeldian Harold Attinger (Kelsey Grammer) — is already on to Optimus. Storming the property and telling Cade, “My face is my warrant,” agent James Savoy (Titus Welliver) and his gang dispatch drones to blow the place up.

(READ: Corliss on the 75th anniversary of The Wizard of Oz)

That sends Cade, Tessa and Shane on a far-fetched rendezvous with Joshua to save the world from Attinger’s scheme to create a new breed of warrior from the transformium bots. Attinger has already pegged Optimus as an “alien combatant, here illegally,” as if the Autobot were a combination of Guantánamo inmate and Mexican anchor baby. Now the CIA rogue is in league with a superior machine called Lockdown (voiced with corrosive English snootiness by Mark Ryan), who is more or less Marvel’s Loki transplanted to the Hasbro universe. “It’s not their planet,” Lockdown says of Earth’s creatures. “Never was. Time to take it back.”

As in most monster epics, the humans are incidental — the merest collateral damage, ants on a soccer pitch — to the earth-shattering footfalls of the SPFX giants. Cade and Tessa will survive only by sheer dumb luck, and by the need to keep the characters around for further episodes in what Bay intends as a second Transformers trilogy. We get hints of the bigger story when Lockdown eventually clashes with Optimus and sneers, “You weren’t born, you were built. And your creator wants you back.” Cue the fifth Transformers.

(READ: How Michael Bay created the movie-industrial complex in the first Transformers)

Rather than offering hope to haters of the series that it’s ending here, the Age of Extinction subtitle refers to the destruction of the dinosaurs 65 million years ago, not from an asteroid crash into Earth but from a flotilla of spaceships whose deadly artillery destroys most living things. This promise of a climactic assault of the dino-bots, improving on the new Godzilla, is only partially fulfilled, but when they’re onscreen they look cool.

That’s a problem with Bay: he doesn’t seem to know what he’s good at. His Imax camera glides through impeccably choreographed tracking shots on land and in the air. The bot battles he and his FX crew stage are not just red meat for fanboys but the movie’s cinematic glory. The 15-second transformation of Optimus from a shabby pickup truck to a super-racer with flaming decal work is a wonder to watch. Lockdown’s spaceship, on which Cade’s and Optimus’ teams both sneak a ride, has the rich detailing of a winged mastodon; it’s a plane with a demonic personality.

Yet Bay still thinks of himself as a competent director of actors, without any visible evidence. Wahlberg, often convincing as a stalwart, lumpen hero, must spend half the film fretting over his daughter’s choice of beau. Peltz is the generic blonde, around only to get into trouble — here, by alien abduction. John Goodman, Ken Watanabe, John DiMaggio and Reno Wilson have fun voicing the “Dirty Foursome” of Autobots summoned by Optimus, but they never escape the cage of comic stereotyping. And Tucci, playing a sleazier Tony Stark, is forever spuming the orders and insults of an undersize bully. As the acid-tongued Addison DeWitt says in All About Eve, he’s too short for those gestures.

(READ: How Bay and Wahlberg meshed on their movie Pain & Gain)

Trans4mers, which has plenty of stupid moments early on — as in the depiction of the U.S. President’s chief of staff (Thomas Lennon), whose cluelessness is meant to amuse but only baffles — really soars into idiocy in its third act, set in Hong Kong. We learn that Joshua possesses an ultimate weapon, known as the Seed, which he lugs around in a bag like a frequent flyer’s oversize carry-on luggage with, say, a small, heavy corpse inside. When Joshua and his Chinese contact (Li Bingbing, from Tsui Hark’s terrific Detective Dee) are fleeing pursuers, they get in an elevator and no one thinks to press the top-floor button. The good guys are able to penetrate Lockdown’s spaceship, as they did Joshua’s super-secret research lab, because nobody thought to install security cameras.

As everything is meant to race toward the conclusion, Bay clutters the scene with some egregious product placement (for Bud Light, Tom Ford, Samsung, the Pagani Huayra, the Golden Palace Hotel). The final half-hour devolves into a kind of Abstract Expressionist chaos, with commercials. Nothing coheres. Movies usually try to come together at the end; this one falls apart. If that’s Bay’s intention, then cinema has finally entered its Age of Extinction.

Bay at his worst is like an attention-deficient kid banging his toy bots together in the basement rec room. You wonder what enormity he would have hatched with another Hasbro franchise: Mr. Potato Head. 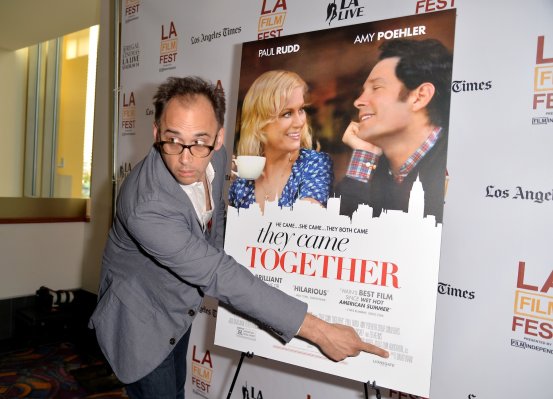 They Came Together: Amy Poehler, Paul Rudd and David Wain Champion A New Era of Spoofs
Next Up: Editor's Pick