Diane Sawyer Leaves World News, and the Anchor Chair Gets a Little Smaller

This just in—as they used to say on the network newscasts that you may or may not watch anymore—ABC’s Diane Sawyer will leave World News Tonight in September, to be replaced by weekend anchor David Muir. Sawyer, who will keep the title of anchor, will continue to do special reports and interviews for the network.

It’s a big change, though not as big as it once might have been. Evening newscasts are among those institutions that get a lot of attention more for what they used to be than for what they are now. They still have millions of viewers, but millions less than they once did; and more important than the raw numbers, they now tend to follow the news cycle rather than define it. (That job now belongs to cable news, online outlets and social media.)

But because of their history, dinner-time news shows still have symbolic value, so it’s significant that with Sawyer leaving, after just under five years, there will again be no female lead anchor on the big-three network newscasts. (Gwen Ifill and Judy Woodruff anchor the public-broadcast PBS NewsHour.) On the one hand, that’s a step back for women in this visible post, since it’s uncertain when another such chair might come open.

On the other hand, you could see it as a stride for women news anchors that Sawyer can look back on her tenure as, more or less, a ratings success. Yes, ABC has generally been chasing Brian Williams, but it’s been making relative gains—as it has in the more lucrative morning-news slot—and in May, World News Tonight won the sweep in the 25-54 news demographic. At a minimum, her leaving won’t be seen as a rejection by viewers, like Katie Couric at CBS, and in the broader view for female anchors, that’s a win: Sawyer, 68, can hand off the newscast to a younger anchor (Muir is 40) as her network tries to increase its gains, like an older male anchor would.

But if you really want to put the move in perspective, look at the move ABC didn’t make today. It promoted George Stephanopoulos in title to “Chief Anchor,” and will use him to anchor special reports and breaking news—but he’s staying put at Good Morning America and This Week. GMA has passed NBC’s Today in recent years, and morning shows have far more money (and arguably carry more influence) than the evening news now; ABC wasn’t going to risk that with a big shakeup at GMA.

Diane Sawyer came up in TV news at a time when reaching the evening-news anchor chair meant reaching the apex of prestige and power. By essentially dividing her throne between Stephanopoulos and Muir, ABC seems to be acknowledging that in network news today, you get one or you get the other. 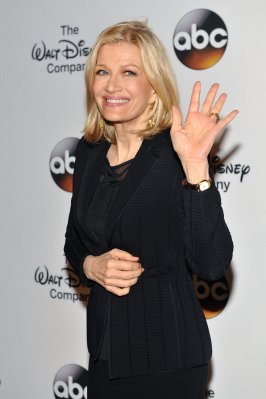